Dr. Trump's medicine show: Why is he pushing an unproven drug? Follow the money

Is it paranoid to suspect that Trump is working a side hustle here? No, because that's basically all he's got 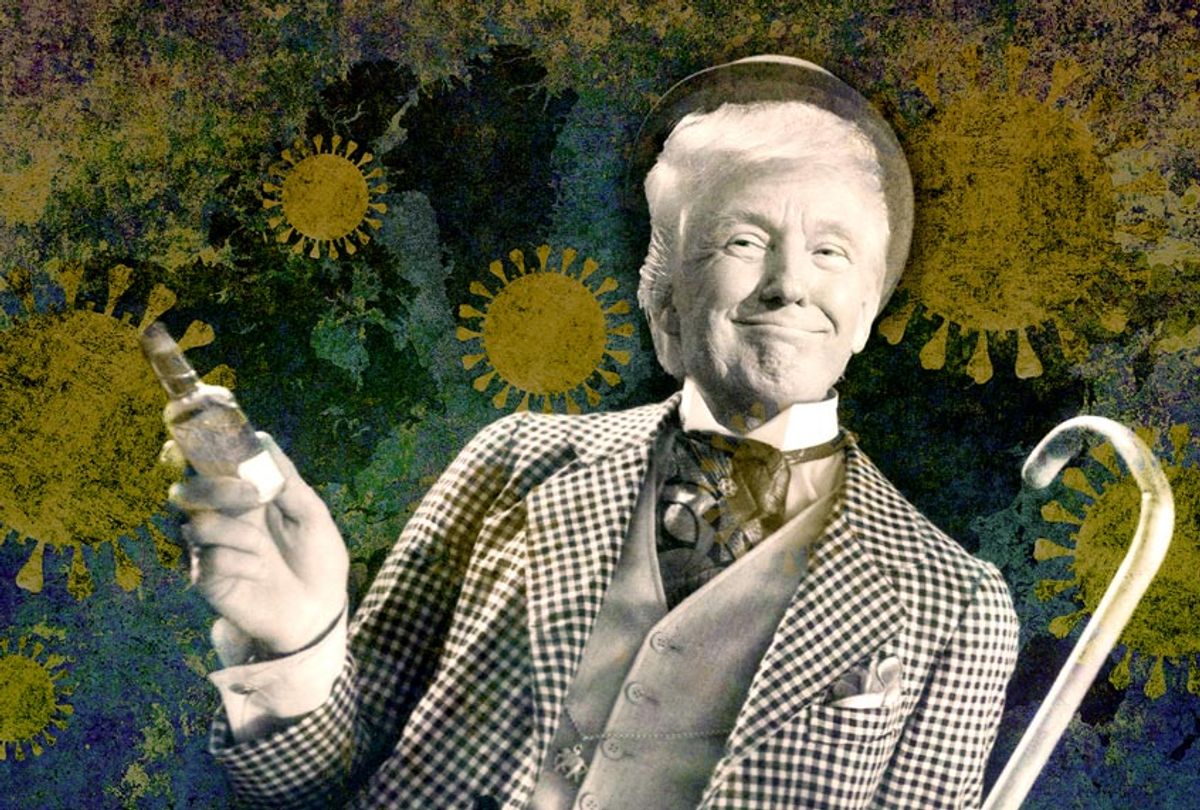 Donald Trump only cares about Donald Trump. He doesn't care about you or the country. He only cares about exploiting this crisis to bail out his business and to get himself re-elected, thereby shielding himself from a series of indictments that surely await him if he loses. The sooner we embrace this easily-observable fact about Trump, the better equipped we'll be to evaluate his decisions during these overlapping health and financial calamities.

The "Trump is all about Trump" maxim goes a long way to explaining his obsessive beer-funneling of a malaria drug called hydroxychloroquine down the gullets of COVID-19 victims.

So far, there have been two public appearances by Trump that have genuinely rattled me. There was his seemingly endless and deeply disturbing CPAC address in early March of 2019: a herky-jerky, stream-of-consciousness creepshow — a Willy Wonka ride into the dark, twisted world of Trump's increasingly haunted and demented brain. I've never seen a presidential speech more harrowing and unnerving than that one … until the Saturday, April 4, episode of the Trump Show.

There was one particular chunk of Saturday's fact-free campaign commercial, aired across all the major networks, that rivaled anything from his CPAC remarks of more than a year ago. About an hour into Trump's delusional attempt to frame himself as competent, the president craned his head forward and, using a high-pitched whisper-voice, begged COVID-19 victims to take hydroxychloroquine as if his life depended on it.

It was one of the most bizarre moments not just in the history of this wobbly wacky-shack presidency, but in the entire history of presidential politics. Trump's pupils were dilated, punctuating his bugged-out eyes and, as usual, his hands were flapping back and forth as if to squeeze an invisible accordion to the tune of a dissonant polka played at half speed. The sound of his voice could best be compared with a greasy Aqualung weirdo in an unmarked van coaxing children into the back with the promise of candy bars if they acquiesce.

There was much more to it, and the text alone doesn't do justice to the freakishness of the moment. But as I watched the president disintegrating into a cartoonish back-alley drug dealer from a 1980s after-school special, two thoughts occurred to me: 1) We're completely screwed if this shell of a man is re-elected, and 2) Why is he so obsessed with selling this malaria drug?

The corollary to the "Trump only cares about Trump" rule is that he's done nothing to earn the benefit of the doubt, so our negative assumptions about his motives ought to be considered accurate until proven otherwise. As I've said from the beginning, I absolutely hope I'm wrong about Trump, but so far, he's proved many of my worst concerns about his poseur presidency to be true. So, in this case, if Trump's pushing an unproven cure with this much vigor, then he's very likely benefiting financially somehow.

Trump is always engaged in one con or another, so he's certainly wired for a scam like this. And the downturn in the economy due to the pandemic has reached the books of the Trump Organization where Eric Trump and Donald Jr. are racing around like the Skipper and Gilligan struggling to guide the USS Minnow out of that freak Pacific storm. We learned the other day that the Trumps are laying off 1,500 workers, an unemployment bloodbath, while closing 17 locations — mainly hotels and restaurants. Likewise, the Trumps are desperately begging their creditors to back off, creditors that include Deutsche Bank and Palm Beach County, to whom the Trump Organization owes a pile of money.

So Trump's businesses are under duress like everyone else's, motivating him to grab whatever cash is nearby. Apparently there's good money in pharmaceuticals.

The top manufacturer of hydroxychloroquine is Novartis. Back in early 2017, soon after the inauguration, Novartis agreed to pay Michael Cohen, Trump's former attorney-slash-fixer, $100,000 per month for lobbying access to the new president. The cash payouts were sent to Cohen's shell company, Essential Consultants, which was also a reputed slush fund for Trump. You might recall that the president used Essential Consultants as an intermediary for alleged hush-money payments to adult film star Stormy Daniels. Indeed, some of those checks were signed by Trump while in the White House.

And no, this isn't some kooky conspiracy to frame Trump. Novartis executives admitted to lobbying Trump with cash payments after they, along with AT&T and several others, were exposed publicly.

All told, Novartis paid Trump more than a million dollars during the year-long agreement, paid out through Cohen's dubious company. Novartis is one of the primary manufacturers of hydroxychloroquine. Two-plus-two equals "what do you have to lose?"

All this is just for starters. The question now is whether Trump has entered into another agreement with a different pharmaceutical corporation, or whether Trump is priming the pump for a renewal of the old one with Novartis. There might be another angle we haven't considered yet. It's difficult to tell at this point, but the history is there. The players, including Cohen and Novartis, have confessed publicly and apologized.

Trump is treating this drug like he's the national spokesman, paid on commission, yet to date there is no peer-reviewed evidence that hydroxychloroquine actually works against COVID-19. In fact, it could have serious side effects — contradicting Trump's whispery, "What do you have to lose?" pitch. Of course it's possible that Dr. Trump's snake oil might work for some patients. We simply don't know. But there's a lot to lose for those who might experience a series of horrendous side effects — taking the wrong medication for the wrong illness has a tendency to do that. Knowing all this, it's ludicrous that the U.S. government under Trump has already invested in 29 million pills, absent any clear information that they're useful against the current plague.

No wonder Trump wouldn't allow Dr. Anthony Fauci, of the National Institute of Allergy and Infectious Diseases, to answer a reporter's question about the efficacy of hydroxychloroquine during Sunday's Trump Show. He knew that Fauci might, at the very least, contradict Trump's drug-dealer-ish rationalizations, and, as you know, coffee's for closers.

Meanwhile, we learned on Monday that the White House COVID-19 task force erupted into an argument over the drug recently, with economic adviser Peter Navarro presenting Trump with several shoddy studies that Fauci observed were "anecdotal" and unscientific, largely due to the lack of control groups. Who should we believe? The scientist with 40 years of experience in his current role, or Trump and Navarro, two guys with zero experience in science, one of whom has a known history of taking money from the one of the drug's primary manufacturers? The answer is obvious to anyone outside the Trump death cult. But as Amanda Marcotte wrote on Monday, the Trump team could be setting up Fauci as a scapegoat for this entire pandemic, in all this, so we shouldn't expect the actual expert to win the debate over Trump's snake oil.

In case you're wondering why the United States has the greatest number of COVID-19 victims worldwide, and nearly 11,000 deaths as of Tuesday morning, it might be because the president has prioritized his side hustle over actually doing the job, relentlessly pitching an unproven drug like the world's most annoying late-night infomercial host. To be clear, he's never been capable of doing the job in the first place, so his various side hustles are all he's got. Consequently, he's wedging his cumbersome bulk between doctors and patients, urging people without medical degrees to second-guess the experts.

Trump's No. 1 priority is always Trump, and he's turning hydroxychloroquine into the new "freedom fries." If you're a member of the cult, you're being commanded to take the drug. Maybe it's to own the libs, maybe it's so Trump can get paid. Either way, take it. It'll make you feel good and all the cool kids are doing it. But if it doesn't work and you die, it'll be someone else's fault. What do you have to lose?