"I think the problem was they had a Trumpian policy": Students frustrated by conflicting messages from colleges 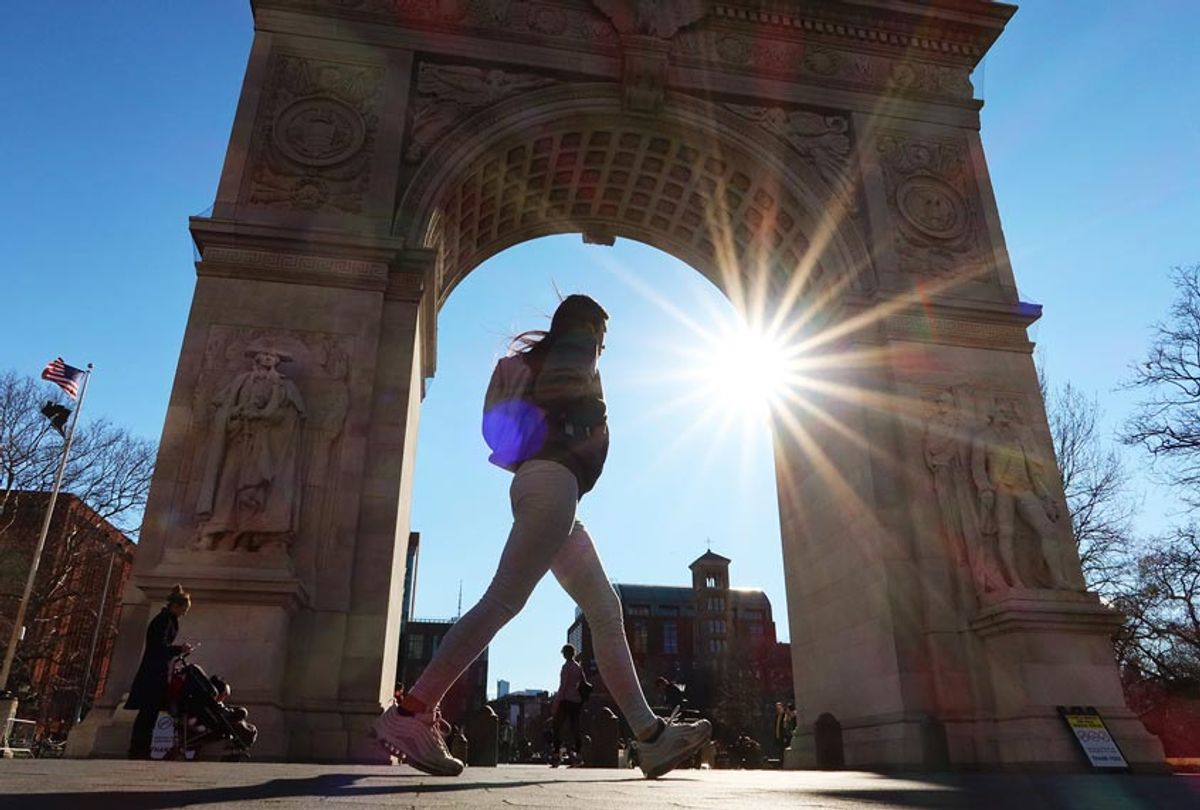 A person walks past the arch in Washington Square Park on March 4, 2020 in New York City. (Gary Hershorn/Corbis via Getty Images)
--

Although the New York City region is the epicenter of the global Coronavirus pandemic, with roughly 5 per cent of the world's confirmed cases, institutions in the region were, in many cases, slow to react to the pandemic. In particular, colleges and universities in New York were slower to shut down than in other regions — resulting in panicked move-out days for frantic students scrambling to figure out where to go.

Salon spoke to college students in the New York area who confirmed that their schools' decision to close dorms at extremely short notice due to the pandemic was mismanaged and poorly communicated. Students at Sarah Lawrence College and New York University (NYU) were given less than 48 hours to pack up and move out, with the option to appeal to stay if they had nowhere else to go.

"One of my friends didn't have a place to go because she is from a country whose borders are closed," said a Sarah Lawrence student who wished to remain anonymous. "So I was just like, 'You are going to come home with me. We'll have a great time in the South.' My last label went on my box at 3:25am, and our Uber to the airport was at 3:30am that night."

For one NYU student, going home was not an option. "I come from Sri Lanka which is an island, so the only way in is air travel, but they closed the airport," said NYU sophomore Anish Chamin Fonseka. "I'm fortunate that I have relatives in the U.S., but there were a number of students for whom that wasn't an option," Fonseka continued.

An NYU political science graduate student said there were equity issues in the hurried move-out. "If you're an international student and embassies are closed, and visas are suspended or delayed, how are you going to be able to come back to the U.S.?" she posed.

Students at both schools say their colleges maintained that the campus and dorms were going to remain open, only to renege on their word, leaving them feeling lost and frustrated.

"We are deeply cognizant of our obligations as a residential community to our students who not only live in, but in many cases depend upon, college housing and dining. While the College is on break, and then during the two-week period of remote learning, the campus will remain open and operational unless we receive governmental directives to the contrary," reads an email Sarah Lawrence College President Cristle Collins Judd sent on March 13.

Three days later, in an about-face, another email from President Judd said that "all students presently in residence on campus must move out fully as soon as possible and no later than 5 p.m. on Wednesday, March 18, 2020."

A letter from NYU President Andrew Hamilton on March 16 noted that "the bar will be high" for those seeking exceptions, and they "should be aware that they will probably be asked to move to a different residence hall."

"Of course the administration was working with the information it had at the time," said Sarah Lawrence junior, Sam Kurzdlo. "But I felt a dissonance between their previous communications to us in which they assured us that because of the value they place on the residential community at Sarah Lawrence, that they would never give us as short of a notice as schools like Harvard did, only to be found in that exact situation, having half the time. Harvard gave its students 5 days to make arrangements to leave."

Fonseka believes NYU should have been more transparent and acted quicker. "I think the problem was they had a Trumpian policy, trying to say, 'Oh it's not a big deal, don't worry,' while inside they were freaking out, and when they couldn't pretend anymore, they went, 'Yeah, get out of the dorms,'" said Fonseka.

"The week that a bunch of schools in Massachusetts decided to close down, I was laughing at it thinking, 'NYU would never do that, that's way too extreme,'" the NYU graduate student who spoke to Salon said. "But now, I wish NYU did this in the same week they did because at this point spring break already started and a lot of people were back at home," she continued.

"I had been home for two days [over spring break] and it came as a surprise. Two days earlier, we were allowed to leave, and assured that we would be able to come back," said Kurzdlo.

For students in the creative arts, the loss of access to facilities and equipment on campus makes it harder to carry on with classes.

Kuzrdlo, a music student said, "I have instruments and equipment at home, but my best things are always at school with me," which would make it difficult to participate in performance ensembles which are going to continue over webcam.

Another Sarah Lawrence student said she had to buy a new laptop to complete coursework. "I create 3D virtual reality spaces, and my laptop wasn't powerful enough to handle even opening the program that I use."

"Something I realized is that NYU tends to make administrative decisions based on what Columbia [University] is doing," the political science student said. "The day before NYU sent us the email about the eviction, Columbia confirmed their first case on campus, so they were telling everyone to move out."

Even though Columbia responded more decisively, Columbia undergraduate student Carlos Rädler thinks "they could have communicated it in a clearer way and thought it through further."

"I think [Columbia] managed it pretty well still, because they offered financial aid to students who couldn't move out," said Rädler, referring to the $500 in emergency funding available to all Columbia undergraduate students to assist with travel, storage, and moving logistics.