Trump continues to claim "nobody" saw the pandemic coming, but his top trade adviser sounded the alarm for months 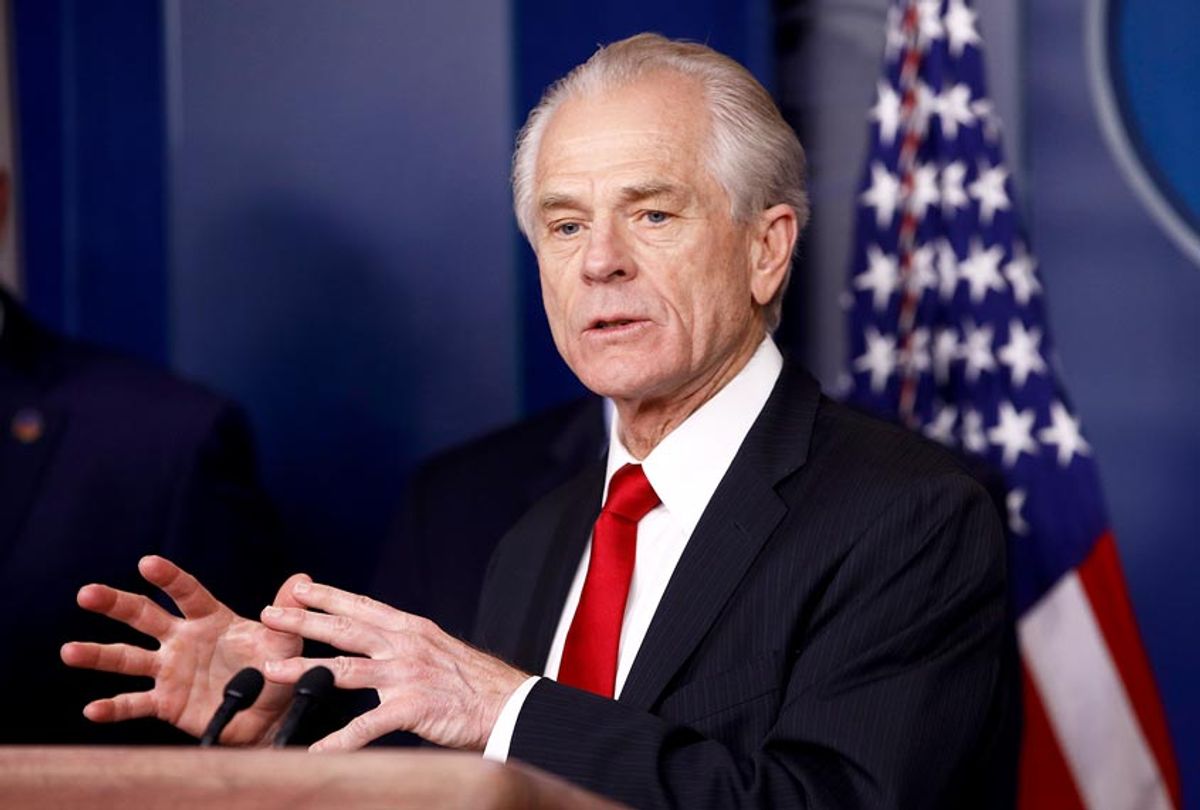 Top White House trade adviser Peter Navarro warned the Trump administration in January that the coronavirus could kill 543,000 Americans. He later raised his projection to 1.2 million Americans, but the president claims that "nobody" saw the crisis coming.

Navarro sounded the alarm in late January that the virus threatened to cost the country trillions of dollars and infect millions of Americans in a memo obtained by The New York Times.

"The lack of immune protection or an existing cure or vaccine would leave Americans defenseless in the case of a full-blown coronavirus outbreak on U.S. soil," wrote Navarro, the highest-ranking official known to have warned the administration before it took steps to combat the spread of the virus. "This lack of protection elevates the risk of the coronavirus evolving into a full-blown pandemic, imperiling the lives of millions of Americans."

Navarro, a longtime China hawk, called for a ban on travel from the country in the memo. It was sent to the National Security Council and distributed to top officials, including then-acting chief of staff Mick Mulvaney. Trump claimed at Tuesday's White House press briefing that he "didn't see" the memos.

"If the probability of a pandemic is greater than roughly 1%, a game-theoretic analysis of the coronavirus indicates the clear dominant strategy is an immediate travel ban on China," Navarro wrote.

Navarro cautioned that it was "unlikely" that the coronavirus would "mimic a 'seasonal flu' event with relatively low contagion and mortality rates" and further argued that "historical precedent alone should be sufficient to prove the need to take aggressive action to contain the outbreak."

The memo was dated Jan. 29 — the day that Trump appointed the coronavirus task force and a day before he claimed that "we have it very well under control" and dismissed the pandemic as a "very little problem." He went on to repeatedly compare the virus to the flu.

Trump has since claimed that the country was blindsided by the virus in spite of the warnings from Navarro and others.

"Nobody knew there'd be a pandemic or an epidemic of this proportion," he claimed last month.

That claim came weeks after Navarro wrote a second memo to the White House coronavirus task force, dated Feb. 23, warning of an "increasing probability of a full-blown COVID-19 pandemic that could infect as many as 100 million Americans, with a loss of life of as many as 1.2 million souls."

"This is NOT a time for penny-pinching or horse trading on the Hill," he wrote in the memo, which was reviewed by Axios. "Any member of the task force who wants to be cautious about appropriating funds for a crisis that could inflict trillions of dollars in economic damage and take millions of lives has come to the wrong administration."

The memo called for additional funding to buy protective equipment for health workers, estimating that they would need "at least a billion face masks."

Though Trump acted on the travel ban one day after the first memo, he did not appear to heed Navarro's warnings. Days after the second memo, Trump insisted on Feb. 26 that the number of cases in the country were "going down — not up."

Meanwhile, the country "wasted" months and did not begin to place bulk orders of necessary ventilators and protective equipment until mid-March, according to the Associated Press.

A senior administration official who received the memos told Axios that there was skepticism about Navarro's warnings.

"The January travel memo struck me as an alarmist attempt to bring attention to Peter's anti-China agenda while presenting an artificially limited range of policy options," the official said. "The supplemental memo lacked any basis for its projections, which led some staff to worry that it could needlessly rattle markets and may not direct funding where it was truly needed."

Former White House chief strategist Steve Bannon praised the memos as "prophetic" and faulted Trump aides for a "total blockage to get these facts in front of the president." He argued that it was the "naivete, arrogance and ignorance" of top advisers who "put the country and the world in jeopardy" — not the president.

Navarro has since been tapped to deal with supply chain issues for the coronavirus task force. Among his duties has been an effort to shore up supply of the malaria drug hydroxychloroquine, which has repeatedly been touted by Trump as a treatment for the virus despite questions about its efficacy, The New York Times reported. Navarro got into a heated argument with Dr. Anthony Fauci, the top infectious disease expert in the country, at a recent task force meeting after the doctor dismissed claims that the drug was effective against the virus as "anecdotal," according to Axios.

Trump, meanwhile, has dismissed criticism that he was late on acknowledging the risk posed by the virus.

"I've felt it was a pandemic long before it was called a pandemic," Trump falsely claimed last month after dismissing the virus as a minor problem and comparing it to the flu.

But health experts say Trump wasted valuable time in preparing for the pandemic, which now has more than 350,000 confirmed cases and more than 11,500 deaths.

Former Health and Human Services Secretary Kathleen Sebelius told the AP that the federal government botched its response by refusing to stock up on vital supplies until mid-March and continued to bungle the supply needs by leaving states to bid against each other on the open market.