I grew up in an underground cannabis bakery during the AIDS epidemic. Yes, it is essential medicine

No one is suggesting cannabis as a treatment for novel coronavirus. That doesn't mean dispensaries should close now 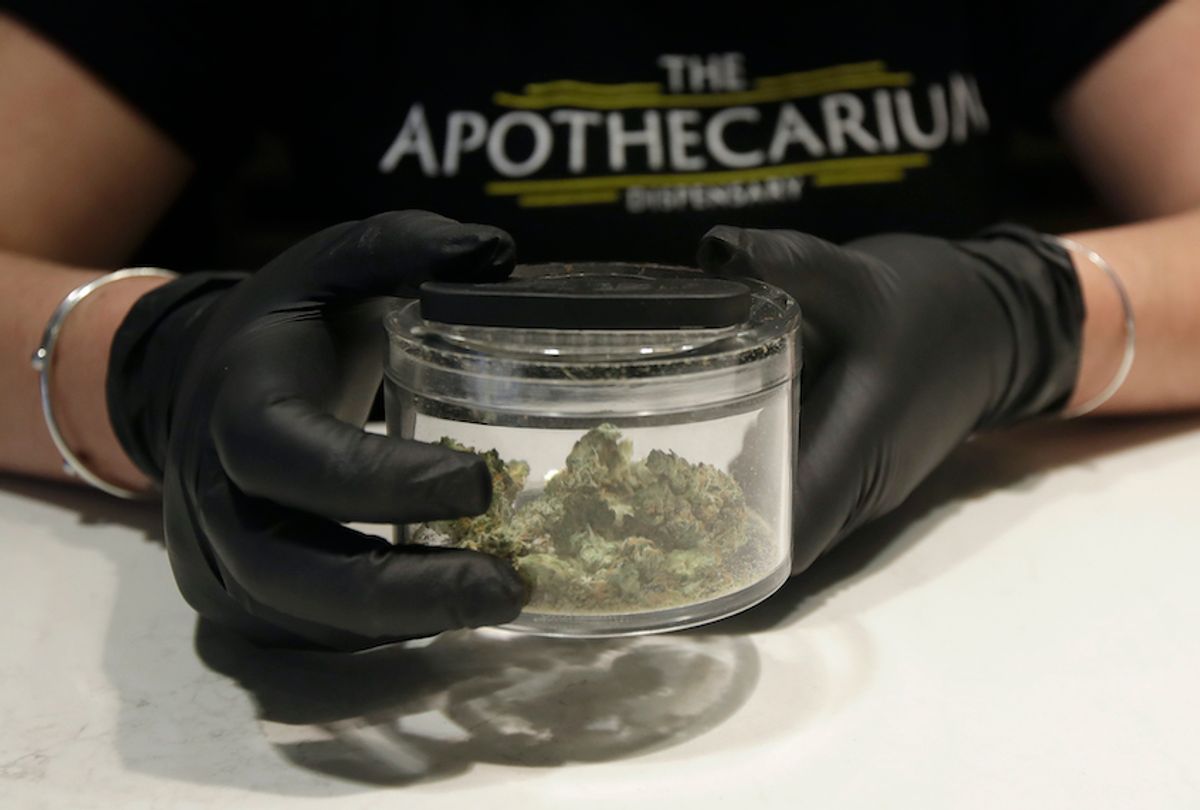 Cali Manzello, general manager at The Apothecarium cannabis dispensary, wears gloves when holding a marijuana sample for smelling while posing for photos at the store in San Francisco, Wednesday, March 18, 2020. As about 7 million people in the San Francisco Bay Area are under shelter-in-place orders, only allowed to leave their homes for crucial needs in an attempt to slow virus spread, marijuana stores remain open and are being considered "essential services." (AP Photo/Jeff Chiu)
--

I grew up in an underground cannabis bakery. During the '70s, my family baked and delivered more than 10,000 marijuana brownies per month in San Francisco. My mom dealt brownies out of my stroller in the Castro district, with weekly stops at Harvey Milk's campaign headquarters and the home of the singer Sylvester. Sticky Fingers Brownies began as party favors at the height of disco extravagance and then changed along with the city. Deliveries continued through the depths of the AIDS crisis and the dawn of medical marijuana.

By the time my mom closed her business in the late '90s, cannabis was no longer considered a party drug. Today, several locales are allowing cannabis dispensaries to operate with modifications during COVID-19 closures.

In San Francisco, a tweet from the Department of Public Health describing cannabis as an "essential medicine" was met with a long comment thread full of predictable stoner humor and finger-wagging about drug use. "Very sad that a Department of Health would promote marijuana as an 'essential medicine,'" one commenter tweeted. "Do you also promote alcohol and tobacco?" Another quipped, "Pot smokers celebrate 'essential medicine' rule by sharing legal bong hits in illegal drum circles. 'Dude, you can't tell us not to have drum circles. Like, that's unconstitutional.'"

As a child of the AIDS era, I take medical cannabis seriously. Starting from the age of nine, I helped my mom bake brownies in the narrow kitchen of our Victorian flat, creating towers of pans stacked perpendicularly to cool. We'd sit together for hours individually wrapping each brownie in cellophane. I accompanied her on deliveries — sometimes to people on their death beds. I saw relief appear on faces overwhelmed by illness when my mom showed up with cannabis edibles. A pot brownie might get them through the day with less anguish.

My mom's friend Michael died of what many were calling "gay cancer" in April 1982. Sylvester's synth player Patrick died four months later. Then it was an avalanche of death. My mom's customers were surrogate aunties and uncles to me. We lost treasured friends — including my mom's bestie, Phillip. Even fabulous Sylvester succumbed in 1988. In urban centers, the HIV/AIDS crisis felt more like a natural disaster — a tidal wave, an earthquake — than a virus. The suffering I witnessed on deliveries with my mom haunts me as we brace for a new viral nightmare.

The first medication approved by the FDA to treat AIDS came six years into the pandemic, though azidothymidine (AZT) proved ineffective over the long term. By the time the new class of drugs called protease inhibitors began to save lives in 1996, more than 380,000 Americans had died.

For people who experienced those early years, particularly in hard-hit communities, the spread of the novel coronavirus stirs difficult memories and unresolved grief. President Trump's tendency to downplay, mock, or mischaracterize the virus echoes the Reagan Administration's refusal to take the unfolding AIDS crisis seriously. Reagan's press secretary Larry Speakes repeatedly mocked journalists for their interest in "fairies." Reagan himself didn't give a speech about AIDS until after his friend Rock Hudson died in 1987. "Both pandemics began with Republican administrations and a Republican president who did not acknowledge the gravity of the situation," activist Cleve Jones told The Guardian. "And the failure of a strong early response led to tragic consequences."

In San Francisco, people discovered early on that cannabis eased some AIDS-related symptoms — notably nausea and appetite loss associated with the deadly wasting syndrome. It helped some patients tolerate the side effects of harsh pharmaceuticals like AZT. Cleve Jones credits marijuana with stanching the relentless vomiting that nearly killed him. "I took one hit and I stopped vomiting, took a second hit and I felt the nausea ease," he told me in an interview. By using cannabis, Cleve was able to keep the combination of experimental drugs his doctor prescribed in his body long enough for them to work. "That's when I started getting better," he said.

Given the prevalence of pneumocystis pneumonia, smoking marijuana was not a safe option for many people with AIDS. They turned to underground bakers like my mom for relief; the edibles she had been selling for years took on new purpose.

"Brownie Mary" Rathbun, a contemporary of my mom's, sneaked marijuana cookies onto the AIDS ward at San Francisco General Hospital where she volunteered as a nurse's assistant. When Mary got busted, she took her case to the media, sparking national interest in a fledgling medical-marijuana movement. My mom's longtime collaborator and friend Dennis Peron operated a series of illegal dispensaries in San Francisco — risky forerunners to the legal dispensaries of today. Dennis co-authored California Prop. 215, which in 1996 became the first medical-marijuana legislation in the country to pass the statewide vote.

While working as an AIDS nurse in the early '90s, my mom's customer Dan Clowry let his patients with wasting syndrome smoke marijuana out the windows of their hospital rooms. Sometimes Dan smuggled brownies onto the ward. "They came up with a medication that was supposed to stimulate appetite," he told me in an interview. "And I was like, 'This doesn't do anything, just give them pot.'" Dan felt sure the doctors on his ward knew about the marijuana. Faced with scant treatment options, they turned a blind eye.

Everyone knew cannabis wouldn't cure AIDS. But it helped some people survive the 15-year wait for an adequate pharmaceutical response to the pandemic. In a time of outrageous suffering, that was something.

Likewise, no one is suggesting cannabis as a treatment for novel coronavirus. But today's marijuana-based products are taken for anxiety, insomnia, muscle spasms, arthritis, depression and a plethora of other common conditions. Smoking anything seems unwise while dealing with a virus that attacks weak lungs, but — in states with legal access to cannabis — dispensaries offer a myriad of tinctures, capsules, edibles, liquids and topical preparations.

Given the facility with which casual contact spreads coronavirus, driving consumers to the black market for cannabis could only result in unsafe, unregulated transactions. California and 15 other states have swiftly adjusted regulations to allow for curbside pickup, doorstep delivery, and/or telemedical prescriptions. Safe and legal access is a public health concern.

On March 16, San Francisco mayor London Breed announced that a shelter-in-place order would take effect at midnight. While doing my last-minute shopping, I noticed a large crowd of people lined up on a normally quiet block in my neighborhood — standing too close for safety. The queue stretched to both ends of the block and continued up side streets. The focal point was Urbana, an upscale cannabis dispensary. Other people were hoarding hand-sanitizer and toilet paper; San Franciscans were panic-buying weed.

Recent years have seen a growing trend toward legalization, both for medical and adult recreational use, and a race for the money — what Forbes has called the Green Rush. I have sometimes felt disturbed by a sense of cultural amnesia. How easy it is to forget that we owe our lavender-scented THC bath bombs to activists who fought for access during the AIDS crisis. The world of legal cannabis didn't come from drum circles; it evolved out of a desperate response to a pandemic. In allowing ongoing access, some state and local leaders are making it clear that they remember.

Alia Volz is the author of "Home Baked: My Mom, Marijuana, and the Stoning of San Francisco," coming in April 2020. Find her work in The New York Times, "Golden State: Best New Writing from California" and The Best American Essays.