Through careful framing and dialogue, Autumn de Wilde's movie portrays Emma as the embodiment of perfection

By Inger S. B. Brodey 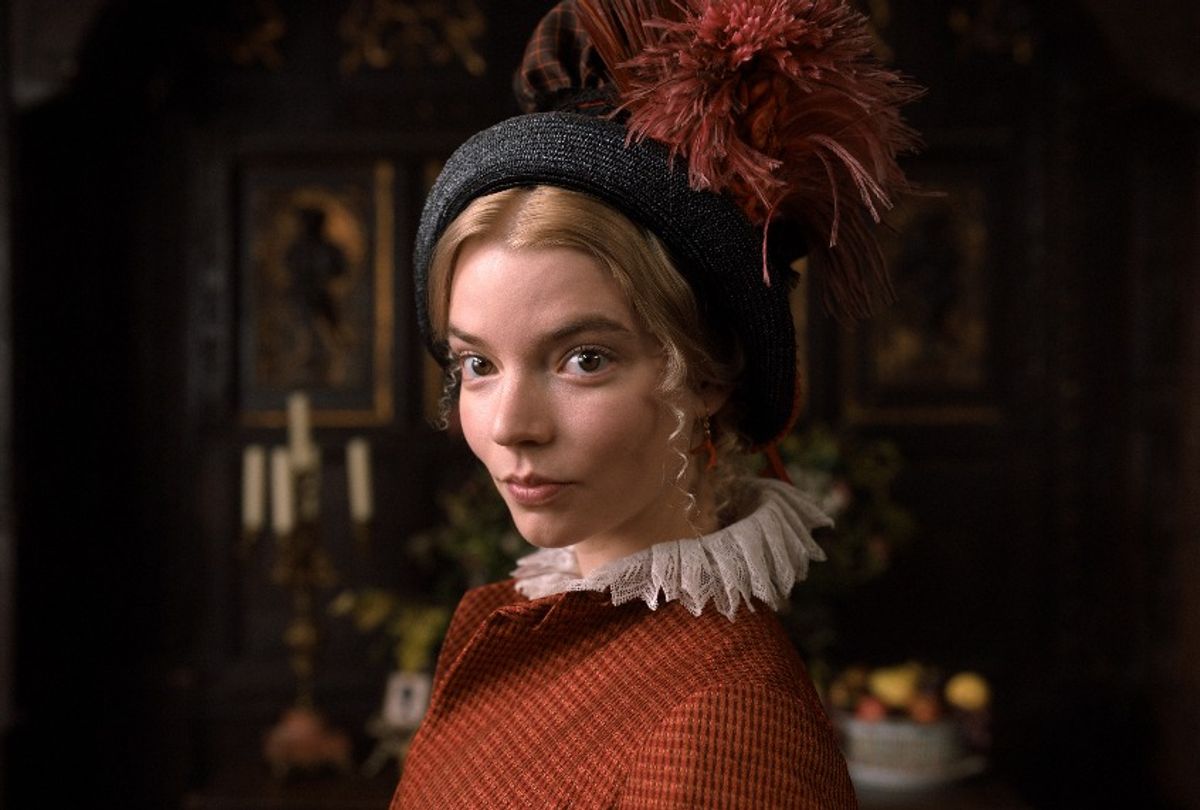 The latest film adaptation of Jane Austen's classic "Emma" is a visual feast of color, pattern and texture.

It's also a bit too perfect.

The colors are too vibrant, the skin too clear, the homes too opulent, the landscapes too gorgeous, the fabrics without any stain or wear. Every frame of director Autumn de Wilde's version feels like a still-life painting or Instagram-ready photograph.

Perfection features explicitly in both de Wilde's film, which has been given an early digital release as theaters close due to coronavirus concerns, and Austen's novel. In making Emma too perfect, the film becomes Emma's fantasy of her own life rather than Austen's more balanced portrayal of her heroine's many faults.

As an Austen scholar, I know that the author herself had a tense relationship with perfection. "Perfection," she wrote in one of her letters, "makes me sick and wicked." While writing Emma, Austen wrote that she was creating a heroine "whom no one but myself will much like."

And, in truth, readers often find Emma's general snobbery and cruel treatment of her friend Harriet difficult to forgive.

Emma's social superiority in de Wilde's film is conveyed visually. Hardly a scene passes where Emma does not claim center stage. She is generally framed by perfectly symmetrical glittering candelabras or colorfully fringed symmetrical curtains, if not actually by the two halves of her name as in the opening titles.

Her perfect mastery of the family estate Hartfield expresses itself everywhere. Servants enter and leave in pairs, puppet-like, moving in choreographed synchrony. Emma's invisible hand extends with tyrannical accuracy over the domestic scenes, and there is little relief from the perfection that she craves. Even her matchmaking stems from her own contrivances: "There is such symmetry between us," she remarks about herself and potential suitor Frank, suggesting that her decisions are guided by aesthetics rather than feeling.

The perfection built up to surround Emma in the film is external. It evokes the worshipful, cowed sense that her friend Harriet feels on her first visit to Hartfield. The viewer of Emma remains an outsider, like Harriet, a spectator of the sumptuous visual displays.

In the novel, Emma's failings are plentiful.

In one scene in both film and book, Emma insults her old and impoverished friend Miss Bates at a picnic. In the awkward moment after the insult, a fellow guest offers a riddle: What two letters spell perfection? The answer, as any Austen reader knows, is M.A. — pronounced "Emm-a" — an ill-timed compliment to the heroine, who has just demonstrated how imperfect she can be. The script stays remarkably true to the novel in this scene, but the response by Emma's suitor, George Knightley is different. In the novel, he remarks that "perfection should not have come so soon." In the film he says, "Who can improve upon perfection?" The distinction is subtle, but important: The film's Mr. Knightley seems more disposed than Austen's to attribute perfection to Emma.

Likewise de Wilde's film minimizes Emma's reckless toying with her friend's heart. Emma still browbeats Harriet into rejecting the suitor she loves. Yet in the film, their friendship is stronger and persists in a way not possible in the novel. By the end, de Wilde's Emma cares enough about Harriet to reject Mr. Knightley's proposal. The novel's Emma could not indulge in such "generosity run mad," and the friendship subsequently subsides.

The film constantly distracts us from moral lessons or deeper human connections, focusing instead on macaroons, hair ornaments, waistcoats and other tokens of superficial beauty. De Wilde's Emma sacrifices complex personality and playfulness of spirit to the subtle tyranny of synchrony, symmetry and surface order, which Emma uses to her advantage.

Even when given the chance to explore Emma's failings, the film version hesitates. The novel provides a potent rival for Emma in Jane Fairfax. In the book, when the two face off in dueling piano performances, Jane's playing and singing are "infinitely superior" to Emma's. Yet the film translates this superiority into harsh, virtuoso piano skills that startle the audience out of their pleasant somnolescence. Jane's skill at Mozart's Sonata in F shocks and amuses but isn't pleasing enough in the film to mortify us on Emma's account. De Wilde allows Emma to reign supreme.

Given the way Emma has been developed to embody soft tyranny and perfection, it is all the more striking when at the climax — the moment of Mr. Knightley's proposal — de Wilde disrupts Emma's visual and external perfection. When Mr. Knightley asks Emma to marry him, we all hold our breath. In the book, Austen doesn't allow us to hear Emma's acceptance. "What did she say?" taunts the narrator, "Just what she ought, of course. A lady always does." At the moment when we readers most crave sincerity and direct expression from Emma, when we want her to just be a rational creature speaking the truth from her heart, she remains "a lady" and seems to conform to social conventions in superficially perfect expressions.

De Wilde uses a striking visual choice to humanize this moment. We're all curious — waiting to hear Emma say "just what she ought." Instead, we're greeted by an exceedingly ill-timed nosebleed.

The brilliance of the proposal scene nosebleed is that it highlights the relationship between Emma as "lady" and Emma as "woman." In this key moment, Emma's humanity bleeds through her perfectly coiffed, ironed and embroidered facade. The brilliant red trail of blood stands out in remarkable contrast to the virginal, delicate white fabrics and blossoms surrounding her and Mr. Knightley. Their intimacy does not advance through words but instead through physical contact. A closeup of a gloved hand gives way in a subsequent scene to a thinly laced glove and skin on skin at the marriage altar.

De Wilde's other bold move is to include nudity in the film. Mr. Knightley is introduced in the buff, and we also see Emma's bare bottom warming at the hearth. De Wilde uses nudity and nosebleeds to create chinks in Emma's armor.

Austen informs us that Emma "was not loth to be first." De Wilde indulges Emma in her wish for preeminence. The film begins as Emma, head lying on a silk-trimmed pillow, just opens her eyes; the film ends as her lace-covered eyes close upon the audience. Emma's vision literally brackets the film itself.

As the period in the title suggests, Emma is a sentence unto herself. She is alpha and omega to this film adaptation. None may question her absolute dominion. And yet, perhaps, perfection should not have come quite so soon or quite as completely. With such perfections, only broad visual strokes, such as nosebleeds and nudity, can bring her down to human proportions.

MORE FROM Inger S. B. Brodey