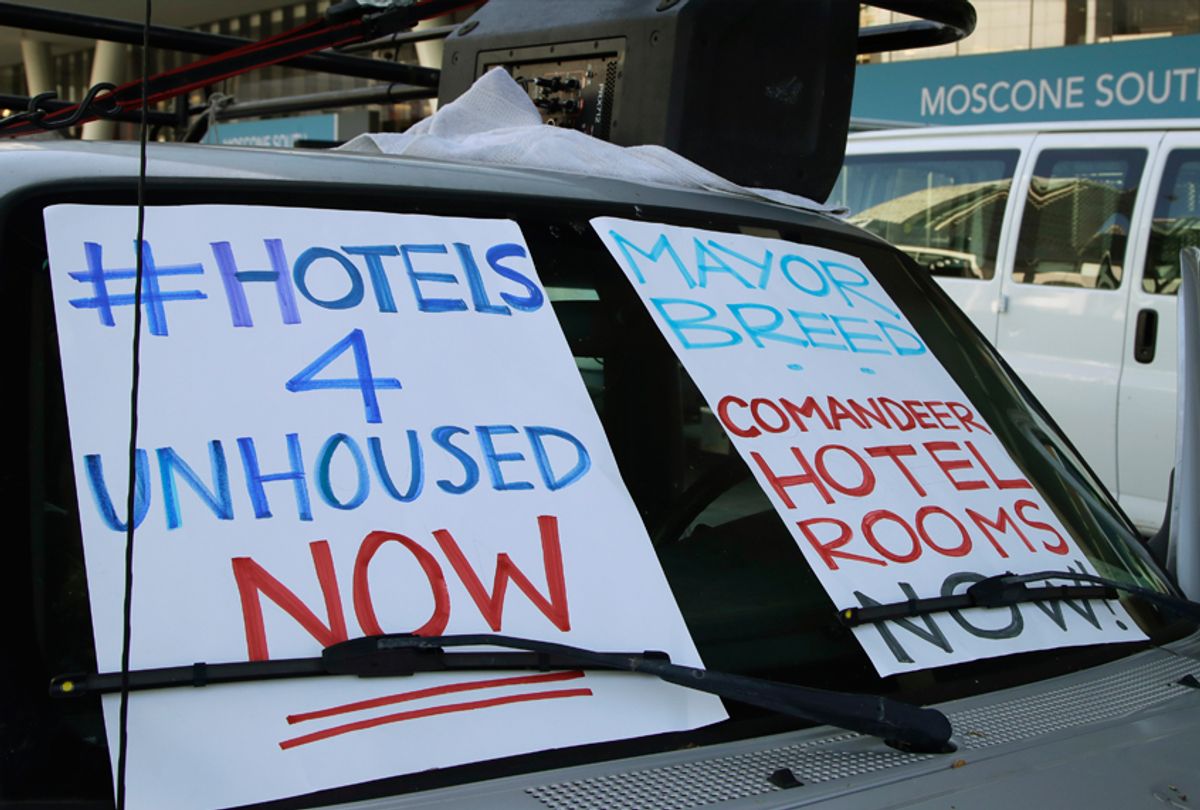 In this April 3, 2020, file photo, activists protest from vehicles outside Moscone Center, asking San Francisco Mayor London Breed to house homeless people using vacant hotels in San Francisco. San Francisco's mayor reported Friday, April 10, 2020, that 70 people at the city's largest homeless shelter have tested positive for COVID-19, infuriating advocates of the homeless who have been pushing the city for weeks to get people out of crowded shelters and into individual hotel rooms. (AP Photo/Ben Margot, File)
--

On Friday, San Francisco Mayor London Breed announced that a COVID-19 "outbreak" occurred at the city's biggest shelter for unhoused people. A total of 70 people — 68 shelter guests and two staff members — tested positive for the disease caused by the novel coronavirus; all 70 were working or sheltering at at MSC [multi-service center] South, which is one of the three housing centers operated by the non-profit St. Vincent de Paul Society of San Francisco.

Now, workers at homeless shelters in San Francisco say that the news is not a surprise, as they have been attempting to raise alarm over what they see as inadequate safety measures for staff and homeless people. Indeed, while the California Bay Area has been commended for its early response to shelter-in-place for its housed residents — the first in the nation, which officials say have saved lives — its response to protecting people without shelter has lagged, as previously outlined by the San Francisco Chronicle.

"In San Francisco, there's been a really strong response in terms of collaborating with other Bay Area counties and being very fast to respond to the virus by ordering a shelter in place earlier . . .  but there has been a double standard with those actions with regards to unhoused people," Jennifer Friedenbach, Executive Director of the Coalition on Homelessness, told Salon in an interview. "For unhoused people, they continue to be forced to sleep in overcrowded shelters where they're not able to practice social distancing, where they're sleeping on top of each other and sharing restrooms, or people who are out on the streets that can't shelter in place."

Those working in the shelters say they lack proper personal protective equipment, and have been given haphazard directions on how to best shelter-in-place those who don't have shelter. The waste of bureaucratic resources is exemplified in city's decision to change its mind over using the Moscone Convention Center and the Palace of Fine Arts as temporary shelters. That happened after the city received criticism from a mix of housing advocates (the bathroom facilities were reportedly shared and limited at Moscone Center, along with other issues reported by Street Sheet), and cries from NIMBY-minded neighbors in the wealthy neighborhoods that border the Palace of Fine Arts.

Friedenbach said it has been "frustrating" to see how slow the city has been to move unhoused people to private hotel rooms secured by the city. Those waiting for coronavirus test results were moved to private hotels rooms earlier this week, along with some who were considered to be high-risk and those who have been definitively exposed to COVID-19.

Still, public health and housing advocates say everyone should be given the opportunity to shelter-in-place. In other words, preventative measures rather than reactive ones would surely save more lives, as shelter workers and advocates say.

"This time delay costs lives," Friedenbach noted. "They're starting to move vulnerable and exposed people and positives out of the shelters, but they're not moving people who do not fall into that category out of the shelters.  They're keeping them there and that absolutely cannot happen."

Friedenbach continued: "They have to move everybody out of shelter — what used to be a 300 person shelter, maybe it's down to 150 [people], but you still have 150 people sharing bathrooms."

Mayor Breed has responded publicly to frustrations about the delay, claiming that it is difficult to move everyone quickly and have the right staffing for the hotels. Yet other San Francisco government officials emphasize the outbreak could have been prevented.

"This is terrible, devastating and preventable," Matt Haney, a San Francisco city supervisor who represents District 6, said on Twitter. "We've been yelling and screaming for a month to get people out of these crowded shelters and protect people."

Jane Bosio is a union representative at OPEIU Local 29, which represents workers at various shelters in San Francisco, including the MSC South Shelter where the outbreak occurred. Salon spoke with Bosio previously about the sentiment among workers in the union.

"They're frightened," Bosio said. "I have many employers who've [s]pent weeks trying to get materials and safeguards from the city and simply have not been able to get the response they need."

Earlier this week, Bosio said shelters in her union still lack masks, though they do have gloves and hand sanitizer. Bosio said she has heard stories from workers who have been told to reuse masks if they do have them. She said she had one union member tell her that she was told to spray a used mask with bleach every night.

"This is somebody who goes to work every day — who's worked in that shelter for more than a decade, who's working on the floor with people who are touching her, whom she is within inches of, for eight hours a day," Bosio said. "One of the things that I personally find so frustrating in this whole process is that you have employers who should be focusing on making sure their employees are safe — they should be focusing on the work of the organization, but they can't because they're on the phone with a city supervisor begging for help, or they're on the phone with the union asking for help with advocacy, or they're on the phone to DPH [Department of Public Health] begging for materials."

The federal Centers for Disease Control and Prevention (CDC) has released guidelines for helping homeless communities during the pandemic.

Advocacy groups and organizations have been pushing for the next pandemic stimulus package to include funding to shelter as many as 800,000 homeless people across the country. Indeed, shelters in San Francisco aren't the only ones struggling to properly get the resources to protect their guests. In Las Vegas, harrowing images of homeless social distancing in a converted parking lot sparked outrage on Twitter.

"After criminalizing homelessness this year, Las Vegas is now packing people into concrete grids out of sight," Julián Castro, the former presidential candidate who served as the secretary of housing under Barack Obama, tweeted. "There are 150K hotel rooms in Vegas going unused right now. How about public-private cooperation (resources) to temporarily house them there? And fund permanent housing!"