With Bernie Sanders out, Trump is now the only socialist in the race 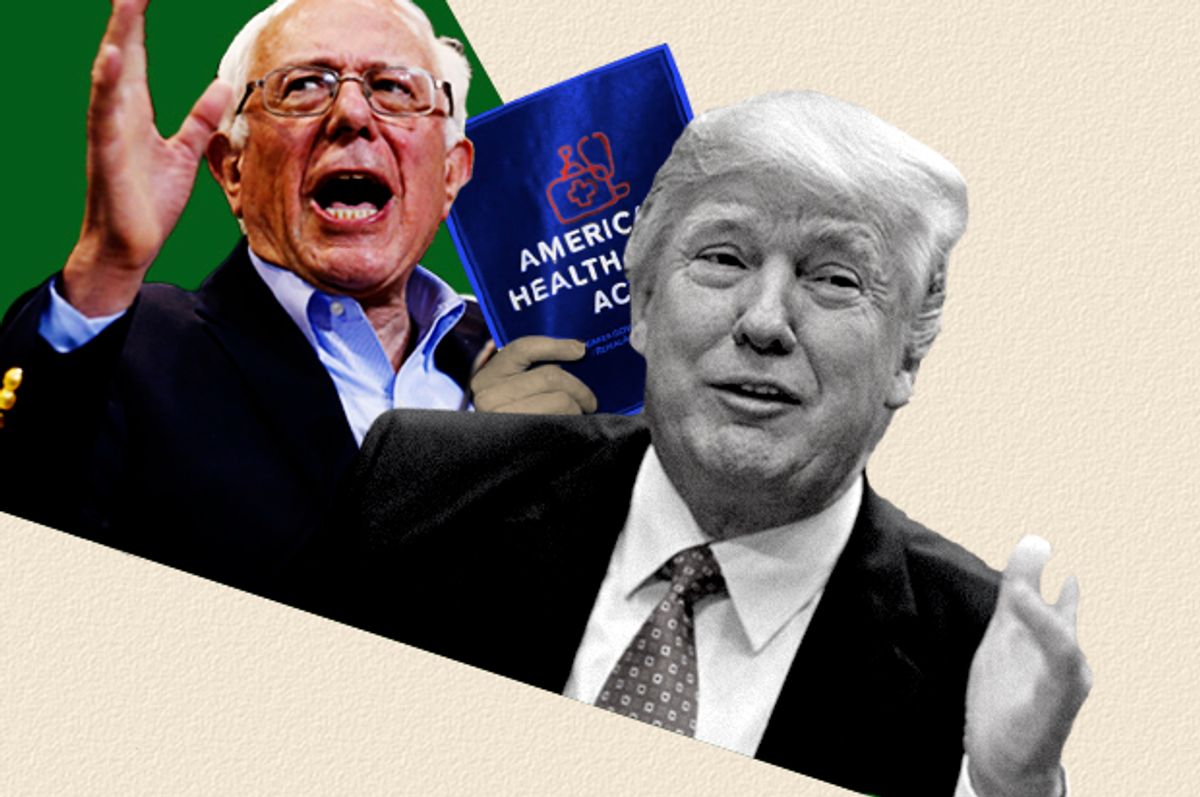 Donald Trump's coronavirus wartime orders repeatedly have managed to contradict himself and just about every governor, mayor and medical officer over these long weeks of disease and lockdown. And they have created another conflict front this week: health coverage in a time of emergency for the uninsured.

What the rest of his government and private insurers were preparing was a special enrollment in the Obamacare exchanges to handle the 20 million who have been kicked off the Affordable Care Act and, now, for the millions who are losing their jobs — and therefore their employer-paid health care.

But doing anything under the name of Obamacare must have been so noxious to Trump that instead he is making this a new direct government payment. In other words, rather than push some of the cost of coronavirus treatments, not tests, to private insurers, he intends to cover the costs under money from the recently passed aid bill as if the uninsured were enrolled fully in state Medicaid programs.

Someone at the White House should call Bernie Sanders. Isn't this Medicare for All? The difference is that it won't use the name Obama anywhere.

As Politico noted, the announcement of a re-opened Obamacare enrollment never came this week. "The White House instead rejected the prospect of allowing new sign-ups across the 38 Affordable Care Act marketplaces it controls — a decision that shocked the health care industry, triggered widespread criticism and prompted a scramble within the administration to find a new way to care for the growing population left exposed to the pandemic.

"It's also one that allowed Trump to sidestep an awkward reckoning with the Affordable Care Act that he's long vowed to kill, and the health care program bearing the name of his Democratic predecessor. The president personally opposed reopening the Obamacare marketplaces," Politico quoted from a White House source.

Instead, Trump said the government would pay hospitals directly for treatment on the condition providers also charge those patients. There is no cost estimate.

So, as I get it, here's where we stand on simultaneous healthcare policies in TrumpWorld:

Of his decision this week for government payment of hospital bills for the uninsured, Trump said: "This should alleviate any concern uninsured Americans may have about seeking the coronavirus treatment. So that, I think, answers the question pretty well and very much in favor of our great people."

It would seem that the same mind that thinks a million coronavirus tests is "a lot" for a nation of 350 million has a keen understanding of a national healthcare system.

Despite the spreading horror of coronavirus as the biggest challenge to the health system ever, the group of 18 Republican state attorneys general continue to move ahead with a case that can upset the entire apple cart. The federal Justice Department, which is supposed to defend U.S. law, including Obamacare, switched sides to oppose the constitutionality of the law.

This fall, Texas Attorney General Ken Paxton is slated to argue in the U.S. Supreme Court against 21 Democratic attorneys general that Obamacare is unconstitutional and must be struck down immediately.

Any decision is likely to come next winter as coronavirus launches its next attack in the United States.

When Trump was asked at a press conference this week whether the virus had changed his administration's plans to press ahead in court, Trump affirmed that "what we want to do is terminate it."

The crux of the challenge is that the Affordable Care Act as passed 10 years ago mandated participation or a fine, a statement treated as a tax. That mandate was struck, and the tax was set at zero, leaving the law open to challenge over whether that now has any legal validation.

Pandemic aside, a ruling overturning Obamacare will be huge. In the middle of a pandemic, it could be catastrophic. Issues range from protection of coverage for pre-existing conditions to coverage for mental health, abortion and elective treatments, and necessarily involve doctors, hospitals, medical facilities and treatments of all kind, and pharmaceuticals.

In typical fashion, Trump asserts that he will provide for such things at low-cost, but provides no plan or outline of approach.

Meanwhile, Congress has passed legislation to provide free coronavirus testing to everyone, but how this works with health insurance to cover related treatments is muddy. Any number of individual anecdotes are making it to the national news media about cases of coronavirus treatment resulting in a sudden bill of thousands of dollars.