Trump has a list of villains to blame for his criminal incompetence. But only his cult members are still listening 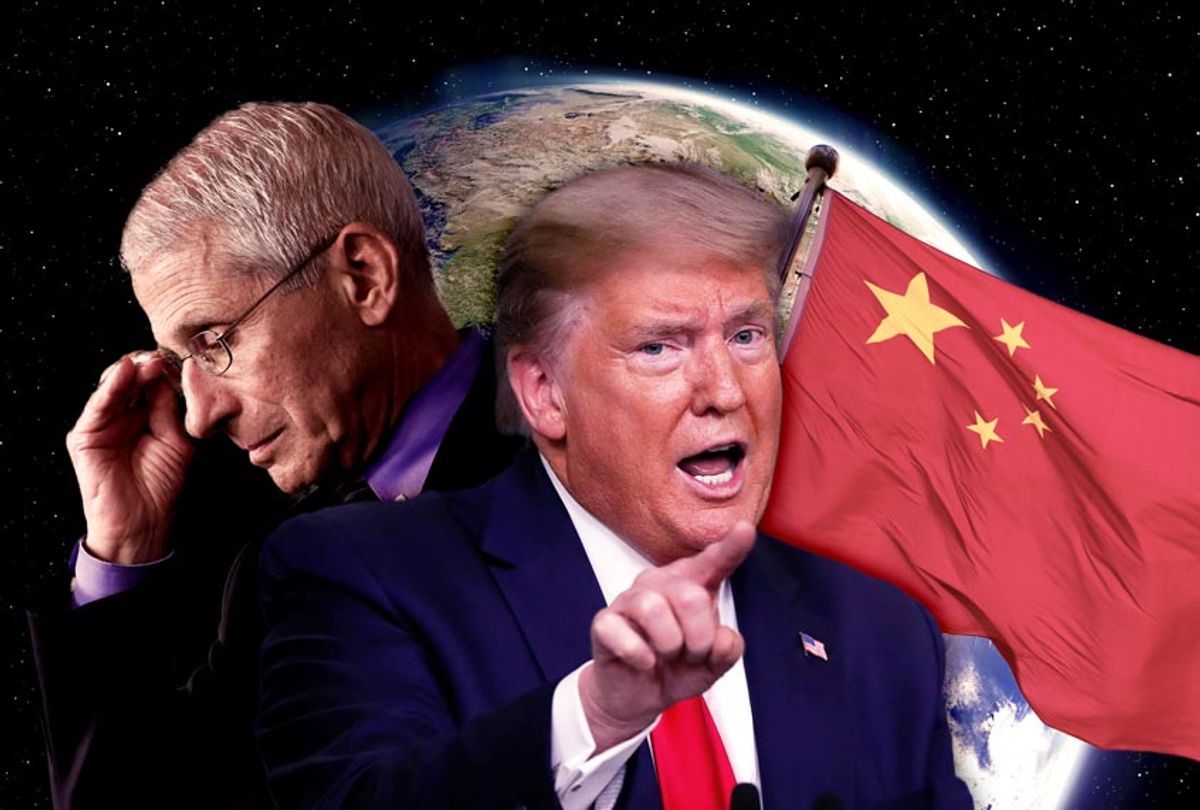 Whenever you read about an obvious scam perpetrated by Donald Trump, it's important to remember one thing: He's lying to his own disciples more than anyone else.

The rest of us — the "normals," for lack of a better term — aren't necessarily the dupes in his various acts of desperate treachery, even though, yeah, we're all the victims of the consequences. But the initial targets of his Batman-villain gambits are his own gullible fanboys, and they're devouring it the way Trump himself devours trans fats.

For example: Trump is engaged in his latest cover-his-own-ass maneuver, while parked in the midst of an historic breakdown of the federal government's responsibilities during a cataclysmic pandemic.

This time, the president's scheme involves blaming everyone except himself for his blind inaction and delusional, carefree attitude toward COVID-19 for months on end, another example of his shrieking impotence, so far removed from the normal behavior of strong, legitimate leaders.

When it comes to this upside-down, horrendously illegitimate presidency, the buck stops with everyone who's not Trump. His strategy to defer blame is aimed at deceiving his own people, the only people who actually believe his screechy gibberish. None of what he's up to is meant for the consumption of anyone outside his brainwashed cult — a cult that continues to swallow his loopy "Jim Jones for Dummies" act.

It's already well established that ever since he tried to coin his own phrase for the virus, the "Chinese virus," Trump's intention has been to find a visible culprit to blame in order to deflect criticism of his unforgivable ineptitude. Namely China.

It's germane to underscore here that it hasn't been the aforementioned Normals who have routinely lionized Chinese President Xi Jinping. In fact, every time the topic of China pops into one of Trump's whining jags, he can't help but to praise Xi as a personal friend with whom he gets along really well, according to him. Consequently, while Trump's Red Hats are accustomed to applauding any mention of the friendship between Xi and Trump, the carpet has yet again been snatched out from under them, now that their cult leader insists Xi's China is the real crook in all this. No wonder Trump's supporters are so confused. The neck-snapping whiplash must be brutal.

Trump's ties to President Xi's China run deeper than the big beautiful chocolate cake Xi apparently enjoyed so much as a guest at Mar-a-Lago. While the White House is frantically pointing stumpy fingers at China as the real killers, the Trump Organization continues to do billions in business with China. The top Chinese state-owned bank, Industrial & Commercial Bank of China Ltd., has rented an entire floor in Trump Tower for the last 12 years — at $2 million per month. Ivanka Trump's fashion products rely upon Chinese labor, while the Trump hotel chain has offices in China as well. Meanwhile, half a billion dollars in Chinese money has been invested in an Indonesian project that includes Trump-branded properties.

"Communist China," as House Minority Leader Kevin McCarthy called that nation the other day, is clearly one of Trump's leading business and investment partners — and also the alleged real enemy in the COVID-19 outbreak. How do you square that one, Red Hats?

The Trump White House has also been actively floating trial balloons about firing Dr. Anthony Fauci, director of the National Institute of Allergy and Infectious Diseases, after Fauci made the mistake of saying on CNN that the president should have enacted preventative measures earlier in the crisis. This obvious truth triggered the president's fragile ego, leading him to consider replacing Fauci. Trump and his fluffers in the conservative entertainment complex are also spreading the word that, somehow, it's really Fauci's fault that the White House didn't do more to prevent the spread of the virus.

By the way, discontinuing travel from China was the least Trump could've done without doing nothing. Even though he's insisting on a participation trophy for his decision to do it, it was nothing more than a Band-Aid on a sucking chest wound. Too little too late. Forty thousand people traveled from China to the U.S. anyway, after Trump's declaration. The travel ban was one of dozens of things he should've authorized in January — and much earlier than he did. Oh, and most of the COVID-19 cases arrived in the U.S. from Europe anyway.

Regardless of all that, get ready for Fauci to be bounced and then for a smear campaign to ramp up, especially now that the White House issued a statement claiming Fauci wouldn't be fired — the usual head-fake kiss of death from Trump. Yes, the most competent pandemic expert in the White House is going to be sacked by an anti-vaxxer who stared into a solar eclipse, risking more lives in order to shield Trump and his delicate ego from blame.

So, in case you're keeping score, the piss-poor response by the federal government, which worsened the crisis and led to increased misery across the country, is actually the fault of China and Tony Fauci. We can add state governors to the list too.

Step Three: It's the governors' fault the economy sucks

As we've all witnessed, Trump is framing his out-of-touch pronouncements about the pandemic as "cheerleading" for the country. There's cheerleading and then there's clinical delusion — best illustrated by that "this is fine" cartoon dog meme. He thinks (or claims he thinks) that he's being positive, but he's actually just shielding himself from accountability by continuing to downplay the emergency.

Make no mistake: Everything the president does is exclusively about Trump and Trump's shot at re-election. Nothing more. Cheerleading the nation is actually cheerleading the Trump campaign.

So when it comes to rushing ahead by prematurely reopening the economy, he's casting himself as the good cop fighting against the state governors — the bad cops — the meanies who won't let Americans leave their houses and return to "normal" lives.

Quite likely the real point of this aspect of Trump's overzealous attempt to restart the economy too soon is to defer blame on governors who will resist his urge, chiefly because it could cause another spike in COVID-19 infections and deaths.

This way, as Salon's Amanda Marcotte wrote the other day, Trump can blame the economic downsides of the pandemic on the governors, in blue and red states alike, since they're the ones who will refuse to end stay-at-home orders. Perhaps he'll spare the ones who are "nice to Trump," but everyone else will be blamed for struggling businesses and a sluggish economy, even though sparing lives ought to take priority over boosting the Dow. Trump knew long before COVID-19 that his herky-jerky presidency was being propped up by the economy, and now he's doing everything he can to make sure he doesn't get blamed for catastrophic economic indicators that his own screwball lethargy helped to worsen.

Nevertheless, the only voters who'll buy into this "everyone screwed up except Trump" PR strategy will be the ones who already believe Trump is their clown messiah — and they would vote for him even if he told them to substitute pages of the Constitution for sold-out rolls of toilet paper. No one else is buying his snake oil anymore, as indicated by his rising disapproval numbers.

Trump is deliriously grasping for anything that might extricate his incompetent presidency from a disaster he himself made worse — and the reason he did that in the first place was because he was far more interested in not spooking the economy, a goal he continues to pursue. If he were seriously interested in solving these accumulating calamities he would step aside, go play golf, and allow the grownups and experts to handle things from here. But he won't. He's demanding credit when he deserves none, and he's placing blame where little exists.

My rule from the beginning has always been: Trump always makes things worse for Trump. This time, however, he's dragged the rest of us down with him. It's a real shocker that the idiot who asked Meat Loaf whether he should run for president, who paid hush money to a mistress while in the White House, and who deliberately scammed charities with his dubious foundation would be such an irresponsible chief executive. Now he's also presiding over 9/11-level casualties every day due to an outbreak that could have been mitigated by a halfway competent administration, and definitely by a more legitimate president — not to mention one who's not so tragically out of his depth.