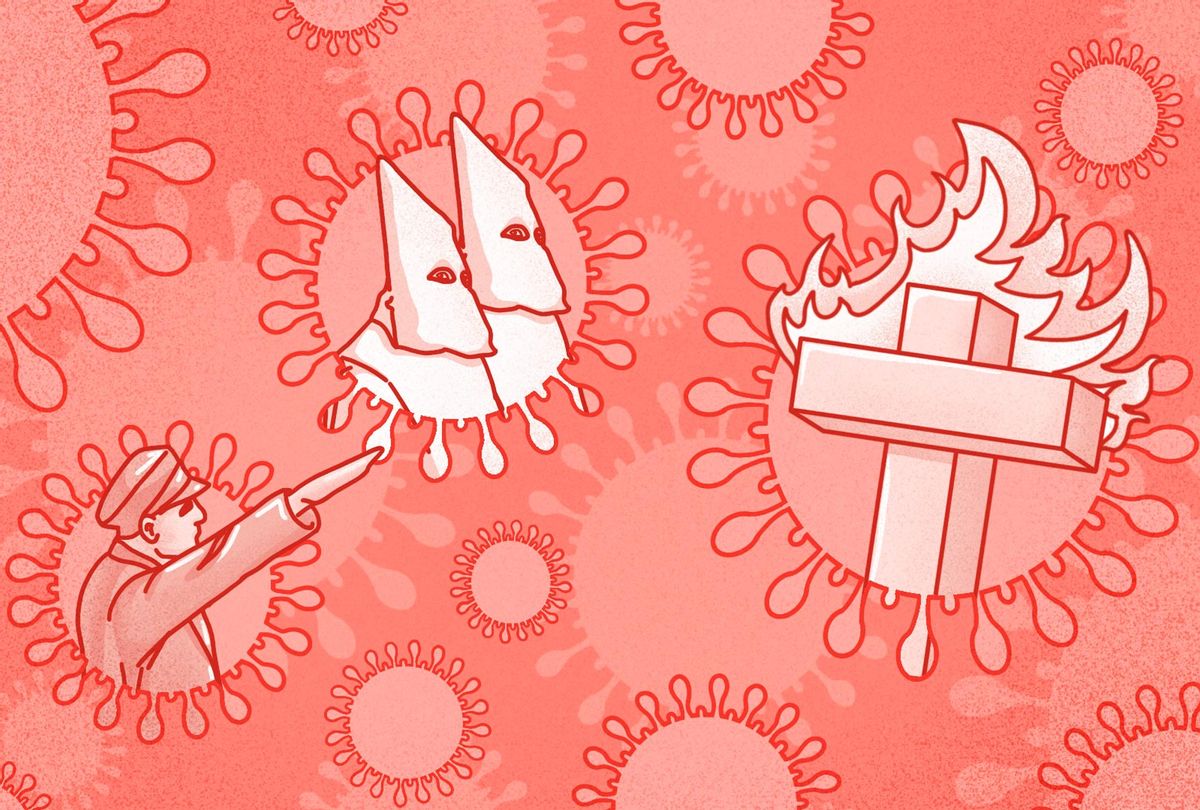 Crisis is an opportunity. This is especially true for the "global right" and its racial authoritarians, along with other white neo-fascists, during the coronavirus pandemic. President Donald Trump is the de facto leader of that movement.

They are using this crisis to engage in terrorism and other acts of political violence — along with other, deeper machinations — to advance their goal of undermining multiracial, pluralist democracy.

Fascist and authoritarian governments often exploit, accelerate, or create crises to increase their power and further their agendas.

These steps are currently in progress.

This has largely been ignored by the mainstream news media amid the tumult of the coronavirus pandemic, white neo-fascists and other right-wing extremists have recently been caught planning or engaging in acts of political violence and other crimes.

Last month, a white supremacist planned to bomb a Kansas City hospital where coronavirus patients were being treated. He was shot and killed by FBI agents sent to arrest him.

Online, various white supremacists and right-wing extremists have been plotting about how to use the coronavirus to advance their goals — including through political violence.

Reportedly, some white supremacists have strategized online about how to use the coronavirus as a biological weapon to infect and kill nonwhites, Jews, Muslims and other targeted groups.

These plots reflect a rising tide of white supremacist and other right-wing violence during the Age of Trump. To point: The Southern Poverty Law Center reports a 50 percent growth in the number of white nationalist groups from 2017 to 2019.

White supremacy cannot be understood as an ideology and set of behaviors only practiced by small groups of white people in America and around the world. It is a far more complicated thing than that.

As repeatedly shown by political scientists, social psychologists, historians and other social scientists, white supremacy and white nationalism are central to the Trump phenomenon, which has effectively conquered the Republican Party, the right-wing news media and their collective public. The coronavirus pandemic has not dissipated that power. Instead, in many ways the virus has amplified it.

For example, black Americans are much more likely to be both hospitalized and die from the coronavirus than are other groups in the country. There are many factors which explain that disproportionate outcome.

These include the relationship between stress, racism and negative health outcomes, and the history of racial housing segregation and related exposure to pollutants and toxins. Black Americans are also far more likely than whites to work in "essential" jobs in the public sector or the service industry, where they do not have the luxury of working from home and must risk exposure to the coronavirus every day.

Black Americans also experience economic insecurity at higher rates than other groups. So they are less likely to have access to health care and are very likely to continue working even when sick because of a lack of savings and other financial resources.

Instead of trying to lessen this dramatic social inequality — which affects the working class and poor more generally — the Trump regime is continuing its efforts to overturn the Affordable Care Act and related programs. Public health experts have repeatedly shown that decreasing access to health care will make the coronavirus pandemic and its long-term society-wide impact much worse. This is especially true for nonwhites, poor and working-class Americans, and other groups who rely upon the Affordable Care Act.

Along with Trump's son-in-law, Jared Kushner, Stephen Miller is also advising the president on the administration's response to the coronavirus pandemic. Neither man is remotely qualified to offer any medical or scientific advice about the coronavirus pandemic. Miller, however, is an unapologetic white supremacist who is most responsible for the Trump regime's cruelty against nonwhite people in general and its obsessive focus on nonwhite migrants, immigrants and refugees, specifically.

The coronavirus pandemic is but another vector for Miller's cruelty.

As reported by civil liberties and human rights groups such as the ACLU, the coronavirus is imperiling the lives of people being held in Trump's concentration camps and other detention centers. Trump's ICE enforcers are also using the pandemic as an opportunity to further terrorize nonwhite immigrant communities by launching raids when so many people are confined at home and therefore easier to target.

Motivated by racism and nativism, the Trump regime continues to blame the coronavirus on China, and to refer to a global pandemic as the "Chinese flu" and, at least in private, "Kung-flu." Asians and Asian-Americans have recently been targeted in hate crimes and other acts of racist violence.

Trump continues to obsess over his beloved racist wall along the U.S.-Mexico border as if it could somehow stop the coronavirus from entering the United States. Facts do not matter to the epistemology of white supremacy: The coronavirus was brought to the United States from both China and Europe, definitely not across the Rio Grande.

White supremacy is not just a matter of racially disparate policy outcomes or the behavior of individual white racists.

White supremacy and whiteness must also be understood as a set of cultural scripts, those stories that individuals and societies tell themselves about human worth and "normal" social hierarchies.

In that script, the coronavirus pandemic is a crisis where whiteness and "white" people are under siege and Donald Trump is a religious and political savior.

Trump's followers are not really threatened by the coronavirus — or at least they believe they're not. For them, the coronavirus is a metaphor or representation of a general racial paranoia about a country they imagine as imperiled by changing demographics. The coronavirus is also seen as an imposition on the "freedom" of white people in the form of "big government" and "political correctness" — code words laden with racial resentment and hostility toward "elites" — and as a threat to continued white privilege.

White Christian conservatives are Trump's most stalwart supporters. He enjoys a 99 percent level of support among them. This is the very definition of a cult.

As public opinion and other research shows, many right-wing evangelicals share Trump's racism and hostility towards nonwhite people — especially immigrants and migrants. These Christian nationalists (whether they embrace that label or not), are possessed by a deep anxiety about losing "their America" to nonwhite people, liberals and progressives, feminists, gays and lesbians, and other groups they view as inferior or dangerous or both.

Considered in total, the coronavirus pandemic offers an opportunity for such Christian nationalists and their fellow travelers to assert their power against secular society and multiracial democracy.

From the depths of this paranoid framing, Donald Trump has emerged as a religious figure, the embodiment of the fusion of contradictions upon which the Cult of the Shining City was founded….

Even now, as the coronavirus pandemic is growing, strange memes and messages are being posted in white-identity, evangelical circles, the roots of which can be traced back to [Jerry] Falwell and the Confederate Christian ideology. They see Trump as standing firm against dark, evil forces. They see the pandemic as a plague from God. A sign of the End Times.

And like other apocalyptic cults, these true believers are not afraid of mass death. They're more than ready to reopen the doors and let come what may in the following days. When they watch the stock market tick upward, they see the hand of a racist, American God. The Dow Jones gaining points is proof of His favor. They'll watch the numbers of infected and dying growing as well, and see testament of a world put right.

In a 2018 New York Times column, Katherine Stewart detailed the role of the Christian right in Trump's authoritarian movement:

We still buy the line that the Christian right is just an interest group working to protect its values…. This isn't the religious right we thought we knew. The Christian nationalist movement today is authoritarian, paranoid and patriarchal at its core. They aren't fighting a culture war. They're making a direct attack on democracy itself. They want it all. And in Mr. Trump, they have found a man who does not merely serve their cause but satisfies their craving for a certain kind of political leadership.

Last Sunday was Easter. On that most important of days to Christian believers, some right-wing evangelicals chose to show their loyalty to Donald Trump, rather than their faith in Jesus Christ.

Through its embrace of Donald Trump and his neo-fascist regime, the Christian right has rejected such basic tenets of its faith as generosity, charity and humility, as well as the profound Christian ethos of offering aid and comfort to the most vulnerable.

There is a history here, of course. White Southern Baptists broadly opposed the Civil Rights movement in America. Many Christian denominations before that defended and legitimized slavery, imperialism and settler colonialism. White Christianity has never existed apart from the global color line, but rather is deeply implicated in both creating and sustaining it.

Since today's Republican Party is our nation's (and perhaps the world's) largest white identity organization, its union with the white Christian right was overdetermined by longstanding shared political values, interests and goals.

In his 2018 autobiography "Said I Wasn't Gonna Tell Nobody: The Making of a Black Theologian," religion scholar and philosopher James Cone described the union of white supremacy and the white church:

White supremacy is America's original sin and liberation is the Bible's central message. Any theology in America that fails to engage white supremacy and God's liberation of black people from that evil is not Christian theology but a theology of the Antichrist….

[White supremacy] is the Antichrist in America because it has killed and crippled tens of millions of black bodies and minds in the modern world. It has also committed genocide against the indigenous people of this land. If that isn't demonic, I don't know what is … [and] it is found in every aspect of American life, especially churches, seminaries, and theology.

Ultimately, Donald Trump will offer no salvation to his followers. Like other fascists and authoritarians, he is only capable of destruction. Trump's response to the coronavirus pandemic in America exemplifies his destructive powers.

Just as white supremacy damages all of society (including white people), Donald Trump and his movement offer no redemption or salvation to his supposed Christian followers. Only darkness. Only death.