Will Trump try to "reopen the economy" by force — even if thousands more die? 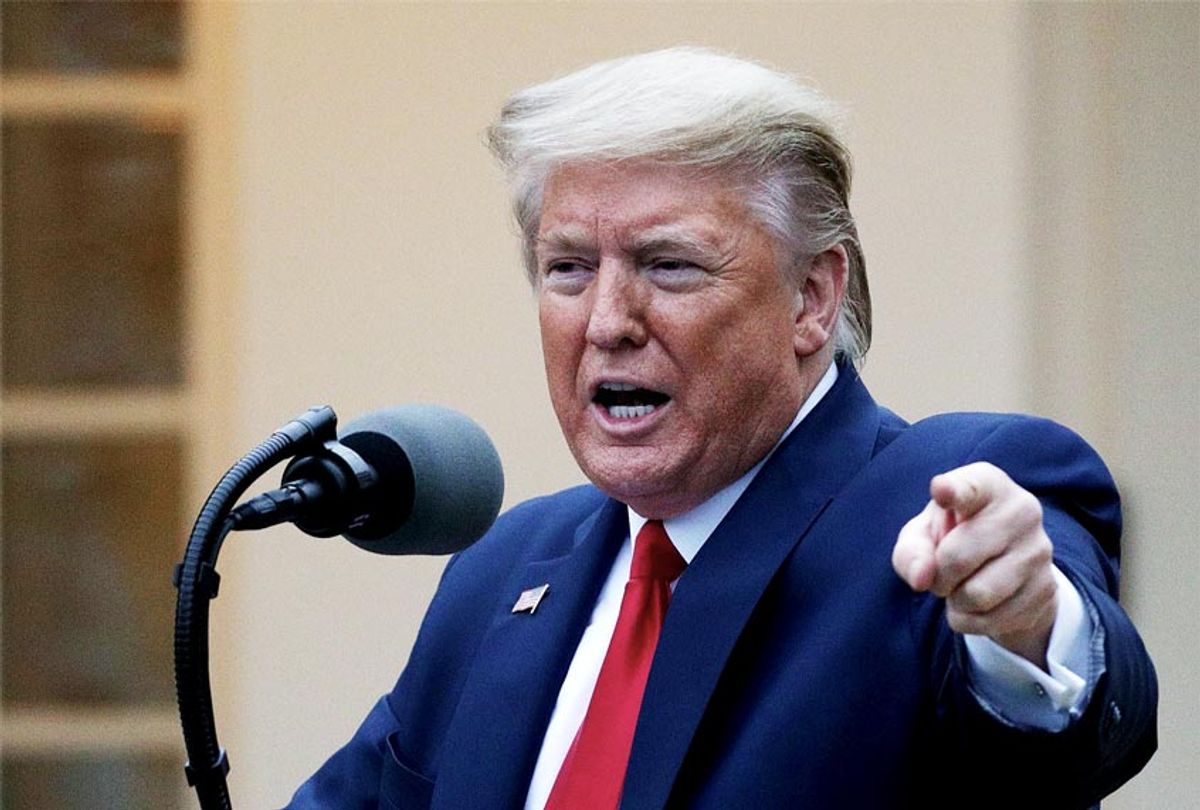 It seems like only yesterday that everyone was lamenting the lack of COVID-19 tests and vital medical equipment, and now we are supposedly ready to "reopen the country." That's because it was only yesterday — and it will be the same tomorrow. There are still not enough tests and not enough medical equipment. But because the worst hotspots, including New York City are muddling through at or near the apex of the pandemic curve — dealing with the ravages of this virus day after day as the bodies pile up but new cases level off — President Trump is trying to change the subject away from his failures to a premature declaration of victory.

His coronavirus rallies (aka "press briefings") this week have been hostile affairs, with the president on the defensive trying to push back against the devastating cascade of reporting that has laid bare the fiasco of his response to the pandemic. But by once again attempting to downplay the current state of the crisis, he seems intent upon making exactly the same mistakes he made before.

MSNBC's Chris Hayes astutely observed on his Tuesday night show that Trump made three essential errors at the beginning of the crisis.

Inadequate testing left public health professionals flying blind for weeks and Trump's lack of understanding of the threat meant that officials waited far too long to issue social distancing guidelines and initiate any meaningful public health response. Trump spent most of his time making happy talk to pump up the stock market, which made it almost impossible for the government to adjust for new information or switch gears when something wasn't working, because he was deeply invested in saying everything was going great.

As Hayes pointed out, Trump learned nothing from that experience and has remained focused on himself and his re-election prospects above everything else — so he's doing exactly the same things all over again.

Trump still fails to appreciate the deadliness of this virus, now bragging openly that because the models no longer suggest hundreds of thousands of deaths, he has handled the crisis "perfectly." Now that he's concentrating on "reopening the country," he again fails to understand that testing and contact tracing on a massive scale is absolutely necessary to avoid a terrible resurgence of the outbreak.

Indeed, he still doesn't seem to understand that asymptomatic people can spread the virus. At last Friday's coronavirus rally, Trump said widespread testing was not needed because "people aren't going to go to the hospital, people aren't going to get sick. It will be gone and it won't be that much longer." (The public health experts undoubtedly pounded their heads on their desks when they heard that one.)

He has totally abdicated, once again, the responsibility to make sure that testing is available:

And of course, Trump still sees the economy as the greater problem, without understanding that these things are all connected, and that dealing with the epidemic is necessary before the economy can recover. Simply telling people to go back to work, go back to the mall and go out to dinner doesn't mean they are going to do it if they think it might kill them. He can't just magically wish this all away.

So, what are we really looking at in terms of "opening up the country"? He's been talking about it almost from the start but it's never been clear exactly what he means. He spent a couple of months just hoping the virus would miraculously go away or suggesting that his miracle cure, hydroxychloroquine, would bring an abrupt end to the crisis and he could go back to talking about Hunter Biden every day.

That didn't work out, so now he's pushing the "reopening" as some kind of edict from the mountaintop. On Monday he made the startling announcement that he had the "absolute authority" to order state governors to reopen. Someone must have informed him we actually have a written constitution and he isn't a king, so he walked that back a bit on Tuesday, saying that he would be "working with" governors and he expected they would do as he suggested.

Lurking underneath that comment was the implicit threat that if they didn't, he might not be able to "help" them any further with federal assistance.:

And if they don't do a good job we're going to come down on them very hard, we'll have no other choice.

That's a dark threat. No, Trump doesn't have "absolute authority" over the states, but he has plenty of power that he can use. We've already seen it in action. He has made it quite clear that if the states need something they'd better kiss the ring, famously saying of governors who were pleading for ventilators, "It's a two-way street. They have to treat us well also. They can't say, 'Oh, gee, we should get this, we should get that.'"

It has been demonstrated that he's more than willing to pass out favors to loyal political allies like Rep. Lee Zeldin, R-N.Y., or Republicans in tough re-election races such as Sen. Cory Gardner of Colorado and Sen. Martha McSally of Arizona. Jared Kushner floated in like an apparition at one White House rally and talked about getting a phone call from one of Trump's New York cronies, and then rushing out some needed supplies right away.

It seems obvious that Trump and some of the people who are whispering in his ear are making the calculation that losing tens of thousands more lives than necessary is just the price that has to be paid. Rep. Trey Hollingsworth, an Indiana Republican may have articulated this idea more clearly than Trump ever has in an interview on Tuesday:

It is always the American government's position to say, in the choice between the loss of our way of life as Americans and the loss of life, of American lives, we have to always choose the latter.

The one's who are still alive anyway.

This is the policy that Trump himself reportedly called "letting the wave just wash over the country" — to which Dr. Anthony Fauci responded, "Mr. President, many people would die."

Trump may be deeply ignorant, but he understood that part. Like Hollingsworth, he just sees the preventable deaths of Americans as a necessary evil to get what he calls "the greatest economy in the history of the world" back on track before November.