Food waste in the time of COVID-19: The real reason to cry over spilt milk 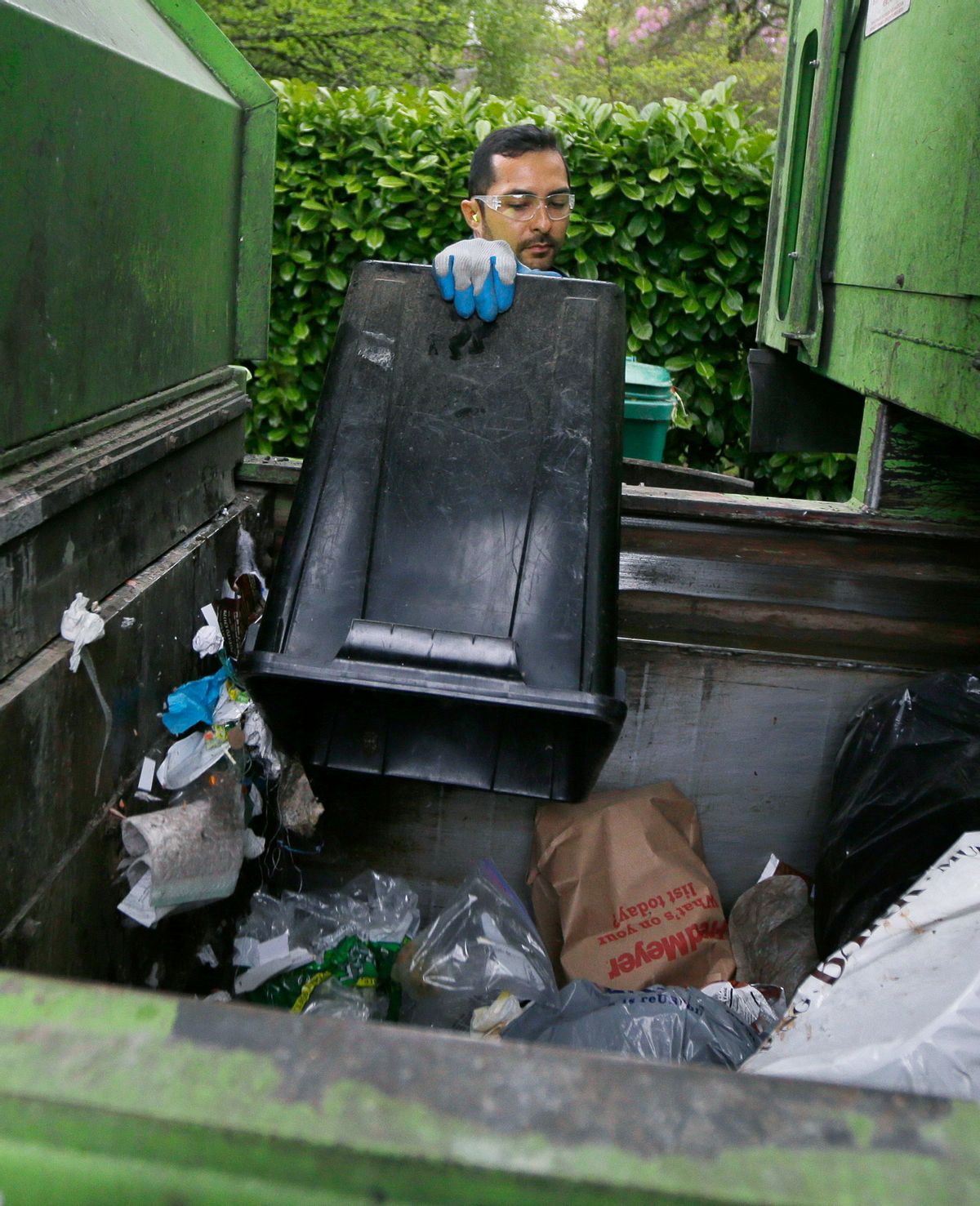 David Morales, a garbage driver with Recology, dumps a garbage container for Seattle Public Utilities, Friday, April 15, 2016, in Seattle. A judge is scheduled to hear a challenge Friday, April 16, 2016, to a new Seattle law allowing garbage collectors to check people's trash to see whether they are disposing of recycling items and food waste incorrectly. (AP Photo/Ted S. Warren) (AP)
--

Earlier this month Wisconsin journalist Shaun Gallagher shared a shocking video of dairy farmers dumping tens of thousands of gallons of milk down the drain as the industry faced reported strains from the COVID-19 pandemic.

"What a waste!" Gallagher wrote in a widely shared tweet. "#COVID19Pandemic is forcing dairy farmers to dump their milk down the drain so the milk market doesn't implode. Why not give it away to those who need it?"

The question seems a natural one to ask, but the very fact that Gallagher's asking it reveals how little is publicly understood about the dairy industry, where dumping milk has been a regular feature for decades.

To understand the nature and scale of waste behind milk being dumped, even under business-as-usual scenarios, consider for a minute everything that led up to this dumping incident. Look behind the curtain of industrial dairy production, ostensibly dedicated to feeding us and meeting our nutritional needs.

Vast swaths of land are cleared for crops and tended by agricultural workers to grow the more than 100 pounds of food required every day by each of the country's 9 million dairy cows. Most dairy operations belong to large, commercial farms, which at all stages consume and release vast quantities of water, chemicals and pesticides.

All this habitat destruction and resource use goes toward producing milk (and related products), which has become an irrevocable brick in the food pyramid not based on its nutritional value but based on decades of work by industry lobbyists.

The U.S. Department of Agriculture already bails out the dairy industry by buying unwanted cheese to the tune of more than $20 million in a year — adding up to a current federal stockpile of 1.4 billion pounds of cheese — produced with heavy taxpayer-funded subsidies in the first place. Note that this is the same federal department that's meant to "provide leadership on nutrition" of a population where 4 in 10 adults suffer from obesity while 37 million struggle with hunger (with overlap between groups).

Consider that our economic system produced these circumstances before COVID-19 even existed. In 2016 farmers dumped $43 million worth of unwanted, unprofitable gallons of milk in fields, manure lagoons and anywhere else they could find to perpetuate an industry that's supported more by government bailouts than consumer demand. All this waste is enabled by lobbyists influencing the people's representatives in government.

On top of that, milk production remains an animal-welfare issue: Nine million cows were forcibly impregnated and had their calves taken away to produce milk in the United States in 2019 alone. It's also a human-health issue, considering the antibiotics, antibiotic-resistant bacteria, hormones, pesticidesand other chemicals present in waste from dairy farms — much of it leaching into America's waterways — with a typical megafarm estimated to produce 187 million gallons of waste a year.

Coming back full circle to COVID-19, milk is a disease issue, as cramped factory farms have been known vectors for MRSA infections, E. coli, cryptosporidiosis, ringworm, salmonella and tuberculosis.

Of course, other types of food are also going to waste as well because of a shift in consumer practices during the pandemic. The market forces and policy interventions governing the dairy industry are hardly unique — all commodities experience gluts and creative pricing to some extent — but only some of those commodities have an existential dependence on subsidies. A mere five of the crop types grown in the United States depend on government subsidies — just as vast energy subsidies continue to be funneled to the oil and gas industry during a time when 70% of Americans support a complete transition to renewable energy.

Most people don't see that, since our economic system runs on turning a blind eye to spilt milk.

Milk pouring down the drain tugs at the heart — for journalists and all of us — because it's easier, and more emotional, to connect wasted food with hungry people than it is to connect, say, natural-gas flaring as a wasted resource.

Regardless of whether you believe the outcome is important enough to justify the waste, let's not keep nurturing the myth that our economic system represents the most efficient use of resources — or that it's the best way to assign value to the resources we have. Industries routinely use their power and deep pockets to stop the playing field from being level — to stop policies being enacted that might be worse for them but would be better for the rest of us.

The myth is hurting us, and we need to call it out. COVID-19 is straining the farcically unjust systems we already lived in — and that could help us to see those systems' flaws with greater clarity. If the questions seem insane — why are we pouring milk down drains? — it's reflecting the conditions that created the drains. Giving "extra" milk to hungry people is not even close to a Band-Aid for all the problems that led to the situation in the first place.