With restaurants and international markets disappearing, it’s sink or swim for the nation’s fishermen. 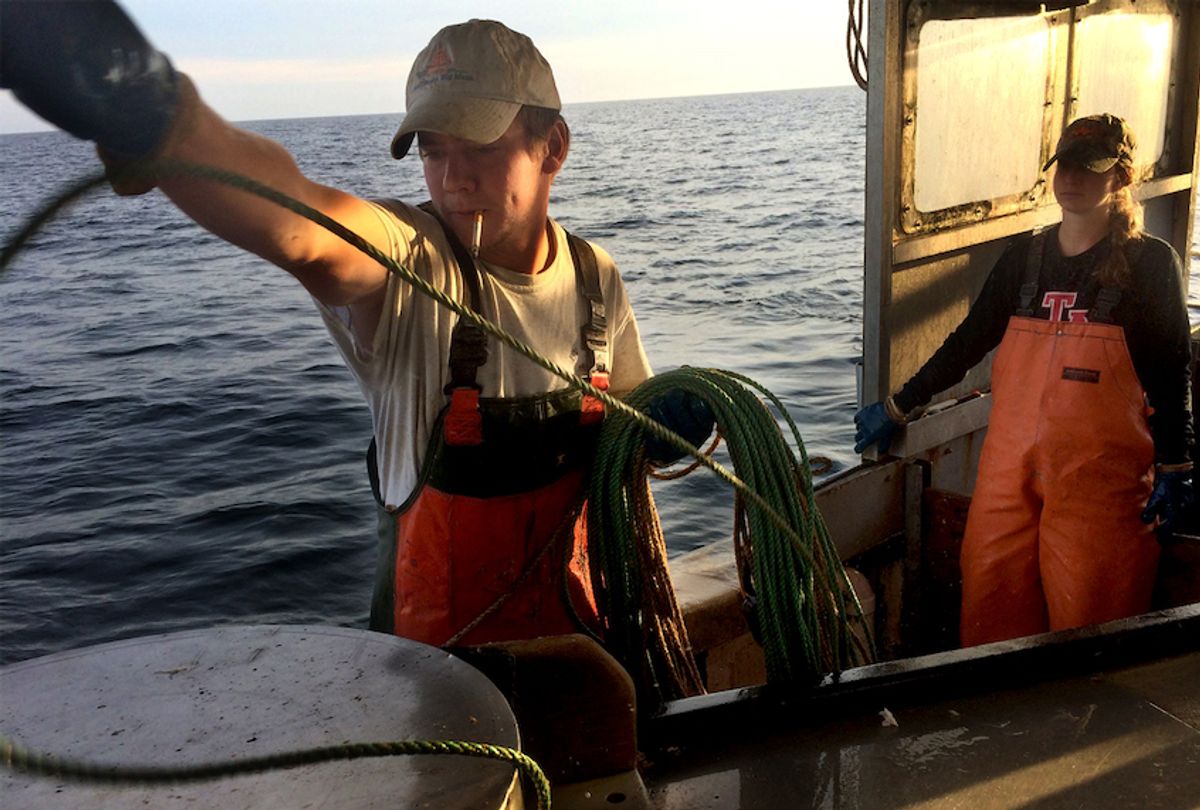 Scott MacAllister has mixed feelings about heading out to sea these days. This time of year, the 27-year-old dayboat fisherman primarily catches skate and monkfish from his home port of Chatham, Massachusetts. And while he certainly needs the income, MacAllister worries about exposing himself and his crew to coronavirus on his 40-foot boat, the Carol Marie.

"It's a pretty small space [for] three or four people. If one of us gets it, we're all going to get it," he told Civil Eats. Still, MacAllister (pictured above) is grateful that the regional wholesaler who buys his catch, Red's Best, still wants to buy his product.

Other fishermen in New England's billion-dollar industry, which employs some 34,000 people, aren't as lucky. Markets for lobster, oysters, and shellfish have collapsed along with restaurant closures and a sharp downturn in trade, leaving many fishermen struggling to make ends meet.

"There are certain things there are no markets for," said Jared Auerbach, founder and CEO of Red's Best, which buys solely from small, dayboat fishermen. While Red's Best usually sells seafood fresh, the company is freezing fish in the hopes that international trade will eventually pick back up — or that the product will find new, domestic uses.

The crisis that's gripping New England's fishing communities is playing out in coastal areas from Alaska to California and the Gulf of Mexico as the coronavirus pandemic disrupts domestic and international supply chains and seafood consumption plummets. At least 90 percent of the seafood eaten in the U.S. is imported—and much of what we catch is sent overseas. The domestic market in the U.S. relies heavily on the hospitality industry; before the pandemic, two-thirds of seafood in the U.S. was eaten in restaurants and hotels.

Wholesalers, fishermen's associations, and fishermen themselves are struggling to find new avenues and methods to sell U.S.-caught fish — which tends to retail for considerably more than its imported counterpart — and keep boats in the water, fearful that the pandemic might forever alter how people eat fish. They're finding new retail markets, keeping a toe in what's left of wholesale markets, and accepting short-term losses in the hopes they can ride out the pandemic. Assistance from the stimulus package — some $300 million in relief is earmarked for fisheries — may also help carry them through. And an alliance of companies with a stake in seafood have urged the Trump administration to direct up to $500 million in additional federal funds to purchase surplus seafood from struggling fishermen.

In Cape Cod, skate wings, monkfish and dogfish have become bread-and-butter species for fishermen as global warming and changing ocean conditions make cod and haddock harder to find. Popular in Europe, those species are lesser known in the U.S. What sells best now, are "the easiest and most well-known items," staples like cod, salmon, and shrimp (largely imported) and lobster, according to Alex Hay, co-owner of Mac's Seafood, which operates several restaurants and fish markets on Cape Cod, as well as wholesale businesses that sell lobster and shellfish.

To eat more U.S. caught fish, domestic consumers would have to start to buying these lesser-known species— a shift that was already being promoted by chefs and fishermen on a small scale before the pandemic. But those campaigns have taken on a new urgency now.

"We have supply chains, and they may fall apart, but people are going to need to eat," Auerbach said.

"What gives me hope is that [last month], I had the best seafood company in the world with all A players," he continued, choking back emotion. "Whatever the puzzle is, we'll do our best to solve it. But I don't have the pieces yet."

Wholesalers like Red's Best, which buys direct from fishermen and sells to restaurants and supermarkets, are laser-focused on keeping their supply chains from grinding to a halt.

"What's depressing is we have the most sophisticated group of farmers, fishers, and harvesters ready to bring food to the dock on a daily basis, and they're sitting at home," said Hay.

Massachusetts fisheries are not under a lockdown order, but some of those fishers might be choosing to stay home because they feel virus testing is inadequate and hospitals are ill prepared to deal with the onslaught of cases that are expected.

Still, some are risking going out alone, said Pierre Juillard, international and domestic seafood director at Marder Seafood, a New England wholesaler. Many want to be out at sea.

"Right now, to keep these [fishermen] going, we're cutting it and freezing it and hedging our bets that in two to three months, it'll start to slowly come back, and we'll have the inventory to sell it," said Juillard. Marder is selling some fish to European supermarkets now, though demand has dropped 50 percent there, and 95 percent in the U.S., over the past month, he said.

Auerbach admits that it's risky buying fish and freezing it for later sale. "There's a backlogs of ships and containers in different places in the world. A lot of fish moves through airlines, [and] that's all messed up right now," he says. But Auerbach also thinks that frozen fish, which easily lasts up to six months, could help feed people locally if global supply chains start to break down.

Retail as a stopgap

In the absence of healthy wholesale markets, fishermen are trying especially hard to drum up sales through retail channels. Red's Best is making fish and shellfish available to consumers through a number of online channels, including its own website, Facebook, the upscale home delivery website Mercato, and a national website connecting consumers to fishermen during COVID-19. Locally, it's enabling people to pick up fresh seafood at the Boston fish pier. [Editor's note: During the editing process for this article, Red's Best sent an update noting that their direct to consumer business "has really blown up," and that Auerbach has seen the customer support as a bright spot.]

Auerbach is also teaming up with one of Boston's top chefs, Jeremy Sewall of Island Creek Oyster and Row 34, to teach people how to prepare fish at home through online videos. "We're putting up really high-quality [frozen] fish," Auerbach said. "You don't have to eat it right away. Take it out of the vac-pack, put it on a paper towel and let it dry off. Cook it and put anything you want on it—soy sauce, barbeque sauce, whatever flavor," he says.

Elsewhere in Cape Cod, Mac's Seafood is offering curbside pickup at two of its restaurants and three of its retail fish markets remain open. While gift cards to its restaurants have been a big seller, it's still reeling from the loss of wholesale markets for shellfish and lobster.

And Marder Seafood is continuing to sell to a handful of retail fish markets, including Fulton Fish Market in New York City and Newburyport Fish in Massachusetts, which offers curbside pickup. Fulton is struggling to stay afloat, as are other fish markets in cities hit hard by the virus, such as Pike Place Market in Seattle.

Located in a small seaside community, Newburyport Fish draws customers from neighboring towns and has steady business now, according to its owner Fred Derr, who helps Marden sell lesser-known, locally caught fish species to the public. "We'll hand them a recipe card for monkfish and clams marinara or white pepper skate," said Derr. "It makes it a little bit easier for folks."

Marder is also thinking about getting an early start on its annual family pantry program, which offers low-cost frozen fish to the Cape Cod Commercial Fishermen's Alliance to provide to people in need. Marder usually participates in the program as a charitable function, but this year the program could also help Marder to keep its supply chains going.

Read more Civil Eats: Can Restaurants Survive the Pandemic By Feeding Those in Need?

The Alliance, which has supported and promoted small-scale and independent fishermen since 1991, has stepped up its "Stories from the Sea" posts about local fishermen and their catches to promote locally-caught fish during the pandemic. "There are a lot of people supporting local restaurants… but we are also asking people to try to cook more fish at home, Doreen Leggett, a community journalist and communications officer at the Alliance, explained by email. "Retail markets selling local fish are going to matter a lot in the coming weeks."

Though all agree that retail is critical now, it's unlikely to make up for the collapse of wholesale markets. "We're just trying to survive, [to] find every avenue we can," said Juillard.

Federal disaster assistance earmarked for fishing communities will provide fishermen with grants and other investments. In an email, Ashford Rosenberg, policy analyst for the Gulf of Mexico Reef Fish Shareholders' Alliance, said the assistance was "an important first step" in helping commercial fishermen…[and] it's likely that more resources and assistance will be needed down the road as we continue to understand the full economic impacts of COVID-19 on the commercial seafood industry."

The industry's struggle to respond to the coronavirus crisis is exposing the fault lines in our fisheries: climate change and historic overfishing are already bringing many to the brink, and the global supply chains that encourage, say, New Englanders to eat Asian shrimp, while their local catch is exported abroad, are ultimately unsustainable.

In the Gulf of Mexico, fishermen are still recovering from hurricanes Irma and Charlie and fresh-water flooding that led several states to declare fisheries disasters last year, according to Rosenberg.

Wholesalers and fishermen are especially worried about losing some supply chains permanently. They fear that restaurants selling domestic fish may never reopen when the pandemic abates, or that the restaurants that have simplified their menus for curbside pickup might not return to offering their catch. It's also possible that restaurants could switch to imported, mostly farmed seafood, in a downturned economy.

Take the Gulf of Mexico region, where 80 percent of snapper and grouper that's landed by commercial fishermen goes into restaurants. "It's so expensive, it ends up being a nice plated dinner. It found its niche," Jason Delacruz, a Florida fisherman and wholesaler, told Civil Eats. "If we end up losing 50 percent of the restaurants in the U.S., say even 20 percent, it's going to change the world that we sell fish to," he said.

When Delacruz was left with 16,000 pounds of fish and no buyers two weeks ago, he was lucky to be able to sell some of his fish to grocery store chains, but he had to drop his price low enough to out-compete imported grouper from Nicaragua. He also sold fish to a restaurant owner who set up a retail operation in his restaurant parking lot, cutting, processing, and vacuum-packing single portion filets.

Like the New England fishermen, such retail markets are tiding him over. But, Delacruz said, "the wholesale side is what always made everything make money — retail was a side thing."

Auerbach says he hopes this moment provides an opportunity to tweak the seafood supply chain for the better. On top of cooking seafood at home, he says he hopes "[imported] offers in big box stores' seafood cases might get in line with what's being landed locally."

"The world was so flat" before the pandemic, he said, in a reference to the globalization of supply chains, "but, maybe it's not."