GOP leaders are getting frustrated that Trump can't "stay on message": report 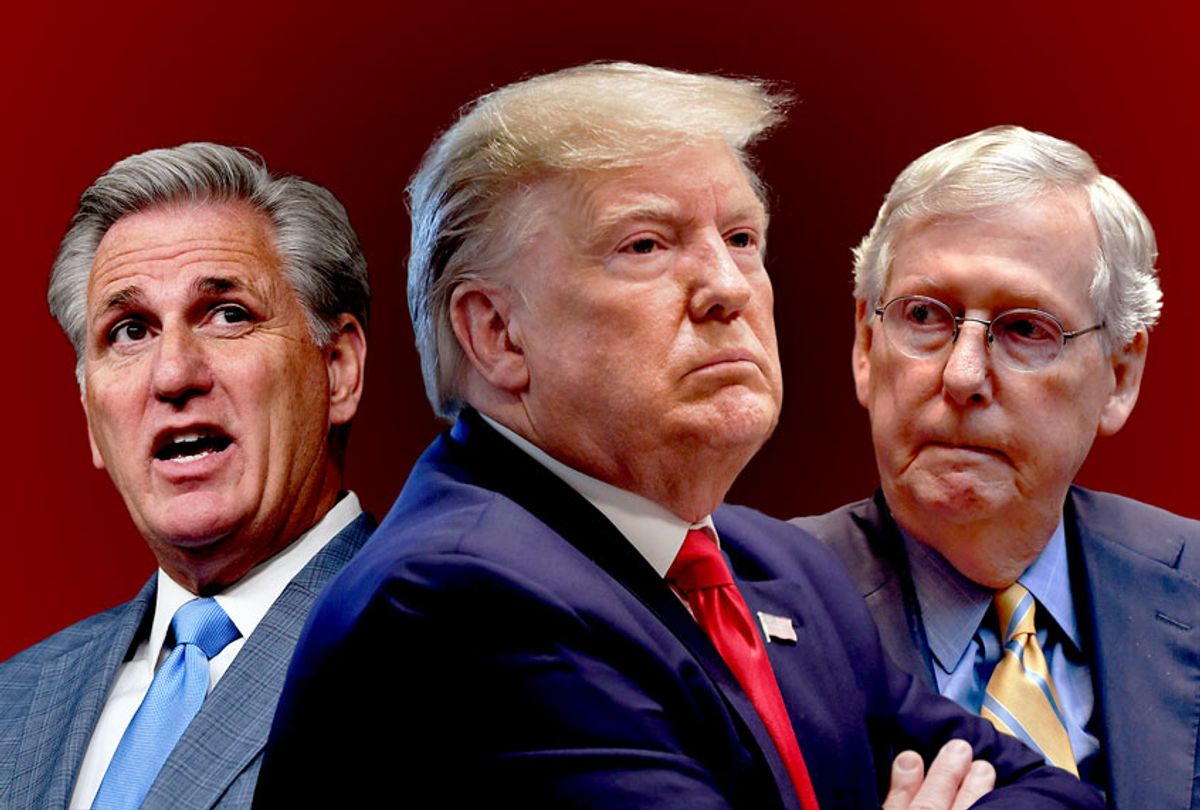 According to a report from the New York Times' Maggie Haberman and Jonathan Martin, a key talking point that the Republican Party — as well as embattled GOP candidates seeking to hold into their seats — hoped to use this election season is being taken away from them because of Donald Trump's flip-flopping.

At issue were plans by the Republican Party to make China a central issue as the 2020 election heated up, blaming one of the United States' largest trading partner for the coronavirus pandemic — while also linking the country to former Vice President Joe Biden who is expected to the Democratic Party's presidential candidate.

According to the report, the GOP is having to retool their plans because of the president's unreliability and inability to "stay on message."

"The strategy could not be clearer: From the Republican lawmakers blanketing Fox News to new ads from President Trump's super PAC to the biting criticism on Donald Trump Jr.'s Twitter feed, the G.O.P. is attempting to divert attention from the administration's heavily criticized response to the coronavirus by pinning the blame on China," the report begins. "Republican senators locked in difficult races are preparing commercials condemning China. Conservatives with future presidential ambitions of their own, like Senators Tom Cotton and Josh Hawley, are competing to see who can talk tougher toward the country where the virus first emerged. Party officials are publicly and privately brandishing polling data in hopes Mr. Trump will confront Beijing."

However the president is still concerned with getting a favorable trade deal with China which is throwing a monkey-wrench into his party's plans.

"Eager to continue trade talks, uneasy about further rattling the markets and hungry to protect his relationship with President Xi Jinping at a moment when the United States is relying on China's manufacturers for lifesaving medical supplies, Mr. Trump has repeatedly muddied Republican efforts to fault China," the Times report states. "Even as the president tries to rebut criticism of his slow response to the outbreak by highlighting his January travel restrictions on China, he has repeatedly called Mr. Xi a friend and said 'we are dealing in good faith' with the repressive government. He also dropped his periodic references to the disease as "the China virus" after a telephone call with Mr. Xi."

The report points out that in private the president continually rages at China, which Republicans find encouraging for campaign purposes, but in public he sings a different tune.

"On Tuesday, at his daily briefing, Mr. Trump was candid about the transactional rationale behind his stance toward China," the report continues. "Pressed on how he could criticize the World Health Organization for what he called pushing 'China's misinformation,' after he had also lavished praise on Beijing's purported transparency, he responded, 'Well, I did a trade deal with China, where China is supposed to be spending $250 billion in our country.'"

"Mr. Trump's clashing comments on China illustrate not only his unreliability as a political messenger but also his longstanding ambivalence over how to approach the world's second-largest economy. He ran for president four years ago vowing to get tough with China, but his ambition was not to isolate the Chinese but to work with them — and especially for the United States to make more money from the relationship," Haberman and Martin wrote. "This goal has prompted him to often lavish flattery on Mr. Xi, most memorably when Mr. Trump rhapsodized about the way they bonded over "the most beautiful piece of chocolate cake you've ever seen" at his Mar-a-Lago resort in 2017."

According to Sen. Kevin Cramer (R-ND) the president's flip-flopping has become more than problematic.

Cramer, "said Democrats were courting political risk if they were seen as defending China. But he conceded that Mr. Trump's 'rhetoric about Xi gets confusing.'"

"I'd have a hard time being that nice to a communist leader," he added. "but the president knows he's got to appeal to an audience of one there."