Virus as metaphor: The scourge that stopped the world

This pandemic has shut down "progress." Now the question is what the world will look like on the other side 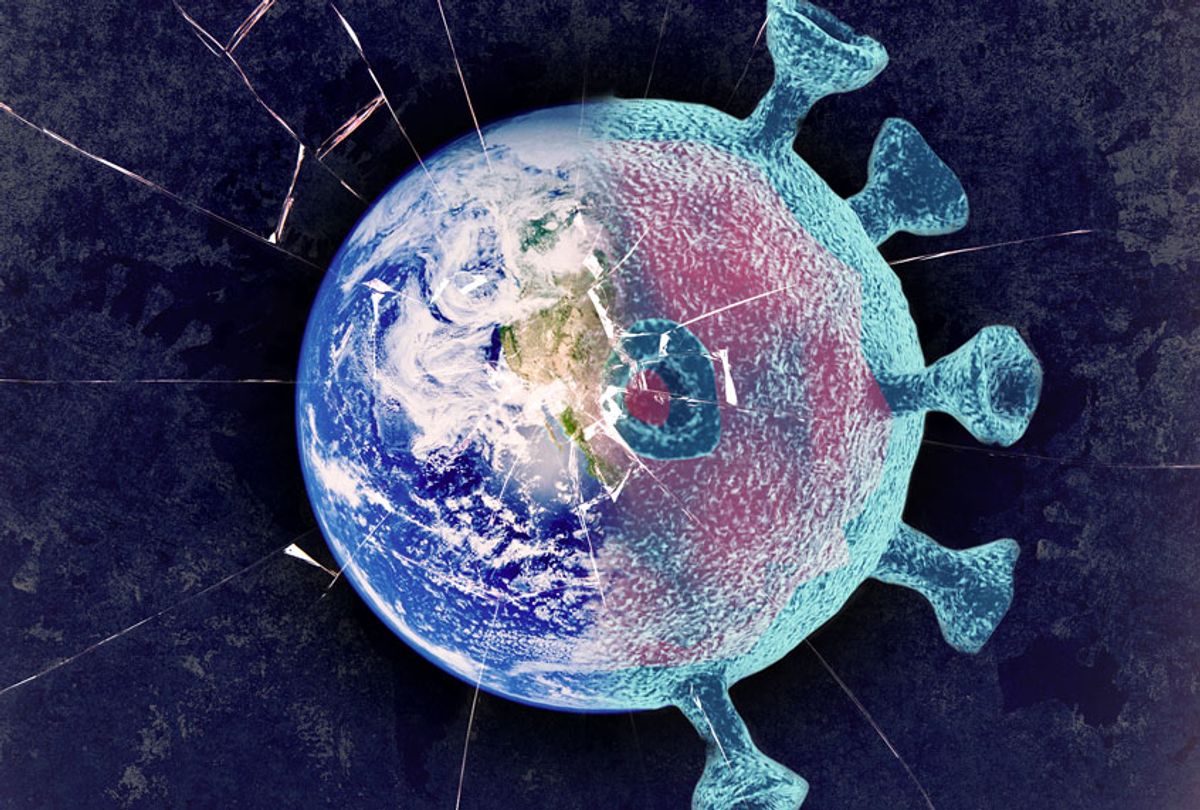 The world is shattered by the coronavirus pandemic (Getty Images/Salon)
--

You can make various arguments for when the modern era began, but for me, it was with the invention of flight. Think of it! For the first time in the history of the world, man broke free of his bonds with the earth — defied gravity! — in an airplane. Sure, the first flight was made possible by the previous invention of the combustion engine, so you could say modernity began with a few steel pistons being driven up and down by explosions of gasoline turning a crankshaft, which  provided the power to turn a propeller.

But I would argue it was flight itself which begat modernity. Everything before that moment had been done on the surface of the earth. If you wanted height, if you wanted to look down on things or see things in the distance, you had to conquer a mountain or construct a building and climb to the top of it. Then one day you could achieve altitude by leaving the earth on an airplane. Look what we did with the airplane. We achieved velocities not possible on the ground. You could jump on an airplane and fly across the country for Thanksgiving in four or five hours! Eventually, air travel went from being a luxury for the rich to something anyone could do. Even the poor could fly.

Until they couldn't. The coronavirus stopped air travel in its tracks. You've seen the photographs of a dozen passengers wearing masks spread across a hundred-plus seats on one of the few commercial flights still operating, but who wants to trap yourself in an aluminum tube at 30,000 feet breathing the same air as who-knows-who when they don't even serve you a snack! And you've seen the photos of dozens of airplanes parked on tarmacs at airports across this country and around the world. Some airlines have shut down entirely. The age of modernity as represented by flight has effectively ended.

Vaclav Havel, the great writer and dissident and former president of the Czech Republic, once defined the modern era as "the culminating belief, expressed in different forms, that the world — and Being as such — is a wholly knowable system governed by a finite number of universal laws that man can grasp and rationally direct for his own benefit." He wrote those words in a 1992 New York Times op-ed that proclaimed that the end of communism had brought an end to the modern age. It was a neat theory, kind of like "the end of history" similarly attached to the fall of communism by Francis Fukuyama. One wonders what these two would think of the way the coronavirus has shown us the fragility, even the folly, of manmade things — how the virus has, effectively speaking, stopped the world.

Of course I'm reaching for a metaphor to show the power of the virus, but the virus is not a metaphor. It's not even alive, in the conventional scientific sense of the word. A virus is composed of genes, like other living things, but it doesn't have a cellular structure or its own metabolism, often described as basic elements of life. It can reproduce, but not apart from a host cell. In effect, a virus is a kind of molecular parasite.

In fact, the coronavirus is perfect in its imitation of its human hosts: In our modernity, we have become parasitic to the planet. Think of the ways we have altered reality for our own convenience. Think, for example, of breakfast cereal. When I was growing up, there were maybe a dozen cereals on a single shelf in the average grocery store: Corn Flakes, Rice Krispies, Cheerios, Grape Nuts, maybe a few bran-based cereals. Today, cereal takes up an entire aisle in a supermarket. The breadth of choice is breathtaking, and so are the ingredients: sugar of course, but also all manner of chemicals and structure-altering additives giving cereals different appearances, flavors and mouth-feel, not to mention "healthiness."

None of the alterations to breakfast cereals were necessary. We, and by "we" I mean humans, did this stuff to breakfast cereals because we could, because we had the power to "grasp universal laws" and "direct them to [our] own benefit," in Havel's words. And look where that's gotten us. We have permanently altered the climate in which we live. We have invented and manufactured seemingly endless new ways of killing each other. We have enriched a tiny percentage of the planet's human population while impoverishing a huge majority of the rest of us. We have poisoned the air we breathe, the water we drink and the food we eat. We have invented one political system after another to oppress each other. And we have wreaked all this destruction simply because we could.

Now along comes a tiny virus to interrupt what has passed for progress. As a species, we are driven to gather in groups to travel together, to entertain ourselves with sports and music and theater, to consume food in restaurants, to worship in churches, even to visit our own families for holidays or birthdays or anniversaries. And now look at us. We can't do any of those things because the virus won't let us. The most powerful man in the world can't gather together the acolytes of his "base" in rallies. Crime statistics show that we have even taken a timeout from killing one another in deference to this virus. We are at its mercy. Our ability to affect our own destiny is diminished. We are powerless over something we cannot even see.

Given all this, the virus doesn't discriminate. It kills children and the aged, preachers and politicians, people who clean bedpans and billionaires. The virus cannot be intimidated. It's not afraid of rhetoric and bluster. It cannot be lied about because the virus contains its own truth in its genetic structure, in its power of replication, in its power to infect and to kill.

That's why the plan Trump announced on Thursday to "reopen" the economy wasn't a plan at all, but rather a pathetic list of hopes and dreams based on PowerPoint charts and lies about testing. He doesn't want to "open" the economy so much as he wants the illusion of things going back to the way they were before. That's why the description he gave of the new normal — of restaurants filled with customers, of the University of Alabama football stadium filled with 110,000 fans, of churches filled with worshipers — was actually a description of the old normal, but with unseen dead people stacked in refrigerated trucks parked at out of the way loading docks. He doesn't care how many people will die. He just wants things to look good. He just wants to get re-elected.

The power of the coronavirus is so huge, so overwhelming, and Trump's part in its spread is so damaging to him, that he is powerless to change the subject. That's why his attempts to deflect blame to Barack Obama, to the Democrats, to China or to the World Health Organization aren't working. The virus is impervious to the flim-flam man with the hair that's now orange, now blonde, now gray and then back to orange. The virus doesn't know what color his hair is. The virus doesn't listen to his lies. The virus doesn't care. It just is.