How many people who listened to their president and his Fox News mouthpieces will be dead by June? 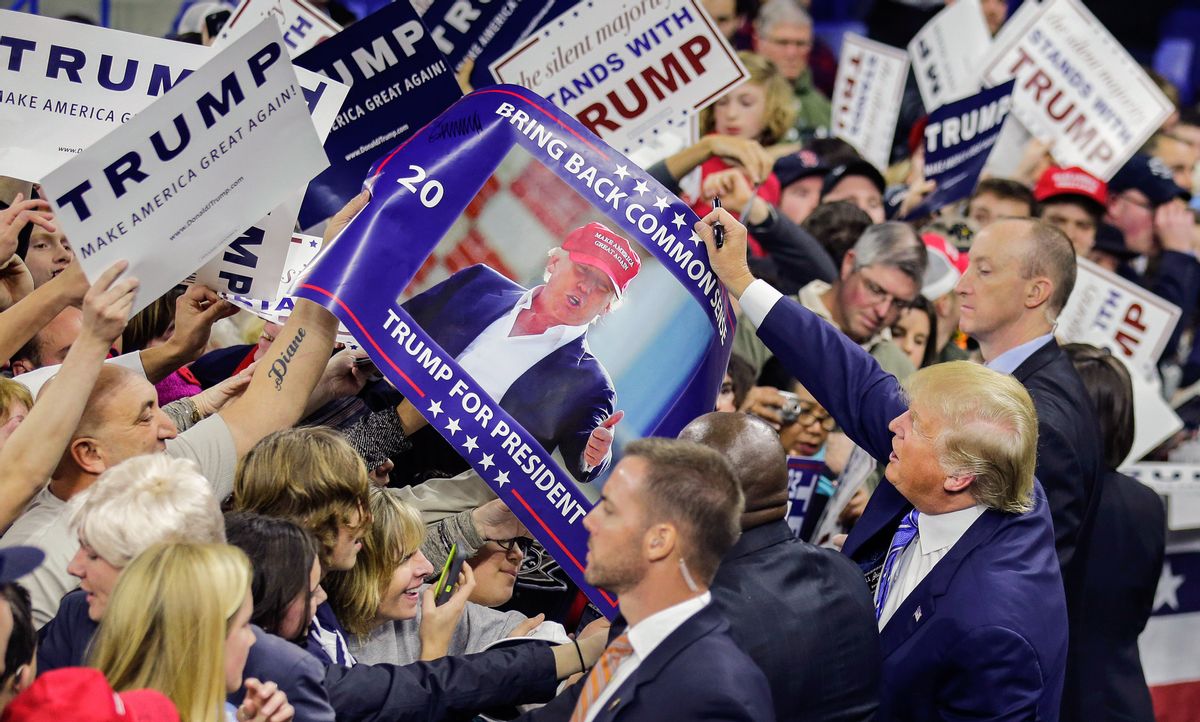 In the finest traditions of Abraham Lincoln and Franklin Roosevelt — two of the U.S.'s most noteworthy wartime presidents — Donald Trump, the coronavirus "war" "president," yesterday accused the state of New York of padding its coronavirus death toll, after New York revised its numbers to reflect thousands who died of COVID-19 before it had a name.

We've gone from "Fourscore and seven years ago" to "Nothing to fear but fear itself" to "Everything we have is documented and reported great," which is how Trump responded to New York's revised numbers. And you wonder why a new poll shows that 45 percent of Fox News viewers believe the coronavirus death toll numbers are inflated. The president said so!

Meanwhile, back in the middle of March when the COVID crisis was first beginning to roar but could have been better contained, the White House realized it had a shortage of face masks for its staff. This set off a scramble to get masks from Taiwan roundabout the 14th of that month. "At the time, the U.S. government was discouraging the public from wearing masks, saying that healthy people didn't need them," reportsThe Washington Post.

Trump's reaction to New York's numbers combined with his administration's flagrant hypocrisy about protective masks are of a piece with his daily efforts to rewrite the history of his lethally incompetent response to the COVID-19 pandemic. His efforts are having a galvanizing effect on many of his supporters, who are now deliberately crowding themselves together to protest the various sheltering orders that have been put in place across the states.

"A protest movement is taking hold targeting states that have extended social-distancing rules, closed schools, and restricted access to large religious gatherings," reports The Daily Beast. "And it's being fed by loyalists and political allies of President Donald Trump."

These pro-Trump protests have been popping up in Idaho, North Carolina, Oklahoma, and other states that have not yet felt the full brunt of the pandemic. The most vivid example to date came just yesterday in Michigan, where thousands of right-wing protesters — a number of them packing AR-15s — swarmed the capitol building in Lansing to protest Gov. Gretchen Whitmer's stay-at-home order. "Lock her up!" they chanted, because of course they did.

While Trump himself is largely responsible for this incredibly dangerous burst of deeply misplaced faux-patriotism, his ideological allies have been busy online. A misinformation-laden video denouncing Anthony Fauci, for now the other face of the daily coronavirus briefings, has gone viral with more than 6 million views. It accuses Fauci and others of being part of the "Deep State," Trump's favorite rhetorical target. Given Trump's recent unsubtle hints that Fauci is telling too much truth, the appearance of this video puts one in mind of the old saying about how there are no accidents in politics.

Evangelical churches have been filled to capacity with Trump supporters who have been led to believe that these stay-at-home orders issued by state governors are an attack on their constitutional right to gather in worship as they please. Evangelicals, of course, have been the unshakable bedrock beneath Trump's dwindling base of support.

Jerry Falwell Jr., president of the evangelical Christian crown jewel Liberty University, has been ardent in his outspoken belief that COVID is nothing to fear and a plot to undermine Trump. "Since March 29, when the first case was diagnosed in a Liberty student living off-campus, confirmed coronavirus cases in the Central Virginia health district, which surrounds Lynchburg and Liberty, have grown from seven to 78," reportsThe New York Times. "One person has died."

Even as Trump's most ardent supporters crush themselves together to protest necessary coronavirus restraints, COVID hotspots have begun to bloom in regions that have been, to date, the geographic core of his support.

Nebraska, Idaho, South Dakota and other rural farm belt states are experiencing spikes in confirmed COVID cases. In Nebraska alone, the state's health department reports a 30 percent increase in cases over the last three days. That is the accelerating curve New York, Massachusetts and Washington State can tell Nebraska all about.

The so-called "curve" of cases does appear to be flattening nationally because a majority of people, especially in urban areas, are devoutly complying with the strictures of social distancing. There are about 30,000 new cases every day right now; the number is no longer accelerating, but is still horrifying to contemplate.

What happens when this thing really and truly burns through rural America? It has already begun, and because of all those Trump supporters standing shoulder to shoulder at capitols and churches to shout their defiance of science and the "Deep State" into the virus-polluted air, it will get worse.

It will get worse within days, if the pattern holds, and there is no reason to expect otherwise. The match has been lit. In two weeks, these rural areas — which have lost so many of their hospitals thanks to decades of conservative budget cuts — are going to be locked into the same nightmare the urban areas have been dealing with since March, but with far less medical infrastructure prepared to confront it.

It begs the deadly, wretched question: How many Trump voters are going to die between now and November? How many people who listened to their president and his Fox Newsmouthpieces, who jammed the Michigan capitol steps and the megachurches on Easter because the president said it was safe, will be dead by June?

Quite a lot, I fear. This is the very living essence of tragedy and farce. Trump has labored mightily to convince his people that this is all some sort of ruse to keep him from being re-elected, and millions of those people have swallowed it whole.

This is a snake eating its own tail in real time while the snake-handler-in-chief cheers it on … except we are not talking about snakes. These are people, all of whom are somebody's children, many of whom have children. They trusted Donald Trump, and that will get many of them killed while subsequently prolonging a pandemic that has already infected 2 million people worldwide.