NYC's EMS union: Move the virus fight into neighborhoods that need it most 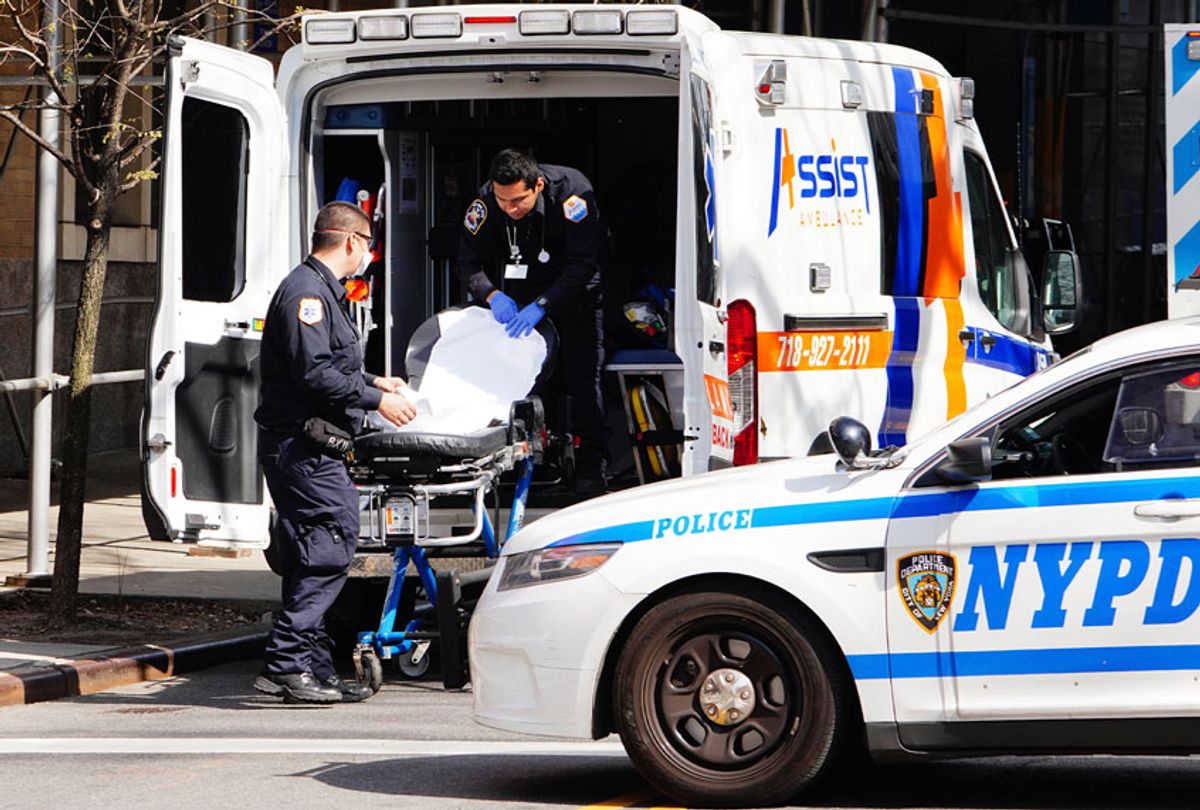 The leadership of New York City's Emergency Medical Service unions say the government must take the fight to contain the COVID-19 pandemic beyond the walls of the city's beleaguered hospitals and into the low-income neighborhoods where the disease is hitting hardest.

That assessment comes as the city and state continue to report hundreds of coronavirus deaths a day while seeing a plateauing, and even a modest decline, in the rate of hospitalizations, ICU admissions and intubations.

Gov. Andrew Cuomo and Mayor Bill de Blasio continued to press for social distancing while ordering residents to don masks when out in public, including when using mass transit.

The universal requirement to wear masks was a major reversal from the initial guidance from the U.S. Centers for Disease Control that masks should be reserved for health care workers.

On April 15 the city recorded 4,768 EMS calls, normally a heavy call volume, but well short of the 6,000-plus reported on March 30. Cardiac arrests were at 161 citywide, far above the 80-day pre-pandemic average but well below the recent high of 296.

Between March 20 and April 5, the average number of fatal cardiac calls was well over 200 — roughly 10 times the average for that period a year earlier.

"So we are seeing social distancing appears to be having some effect, but the bottom line is we are still seeing an extraordinarily high rate of death and fatal cardiac arrests in people's homes," said Oren Barzilay, president of District Council 37 Local 2507, which represents emergency medical technicians. "But it would be helpful to take this fight out into the community to improve the health conditions of people who are now fearful of the hospital and staying out of those systems and dying at home."

On April 15, following reports about a major spike in deaths at home, the de Blasio administration released data that accounted for 962 deaths at home, with 137 of those cases confirmed as COVID-19-related and the 825 others considered probable.

"This disease is particularly pronounced in the poorer neighborhoods," Barzilay said. "You just won't contain it if you don't address it where people live in such crowded conditions and they have nowhere else to go."

"We do need to find a way to reach out to people hidden in our communities who may not feel comfortable seeking medical attention or going to the hospital for fear of getting a bill," said Vincent Variale, president of DC 37 Local 3621, which represents EMS officers. "If you don't have universal testing for everybody, we will never get back to the society we remember."

City Council Speaker Corey Johnson said in a statement, "Our city's front-line workers know better than anyone how devastating coronavirus has been in the five boroughs, and we should listen to what they have to say about what it's like on the ground."

On April 17, de Blasio announced the city would begin moving to the sort of community-based strategy the unions advocated, committing to do 2,400 tests per week in the hardest-hit neighborhoods of persons 65 and older with pre-existing conditions that make them particularly vulnerable to the coronavirus. The city is also working with One Medical and SEIU Local 1199 to establish borough testing sites for people in those categories who are health-care workers and adult-care workers.

On April 8, the de Blasio administration disclosed that African-Americans and Latinos were dying at double the rate of white and Asian city residents.

City Council Member Mark Levine, chair of the Council's Health Committee, said in a phone interview that be concurred with the EMS unions that the city's efforts at coronavirus containment had to be more community-based.

"As far back as the 1930s, Mayor [Fiorello] La Guardia opened dozens of public-health offices all over the city in low-income areas," Mr. Levine said. "Prior to the COVID crisis the city was down to just three of these for the whole city."

He continued, "We need to be doing this in every neighborhood to proactively address the long-standing racial disparities that have made this pandemic so deadly to communities of color. ... The reality is the only health policy that will prevent the next pandemic is the one that treats every single person — citizen, immigrant or undocumented."

Council Member Fernando Cabrera is also the pastor for New Life Church in the Bronx, a borough where city health officials say residents are twice as likely to die from COVID-19.

"These numbers are what I suspected all along because it's our people that are the front-line essential workers in the supermarket, the pharmacy, and health-care workers who were not getting the [personal protective equipment] and had to work and could unwittingly pass this virus on to their own," he said. "And so many members of our community have not been tested and were told not to go the hospital, and so they died at home."

Cabrera said some of the deepest wounds from the pandemic will be psycho-social because of the inability to rely on traditional burial rites in order to observe social distancing requirements.

"This is what we call complicated grief, because we are forced to process this all without the normal rituals that religion provides for families like funeral services and wakes," he said. "This has always been the way families could come together and tell their stories about their lost loved ones."