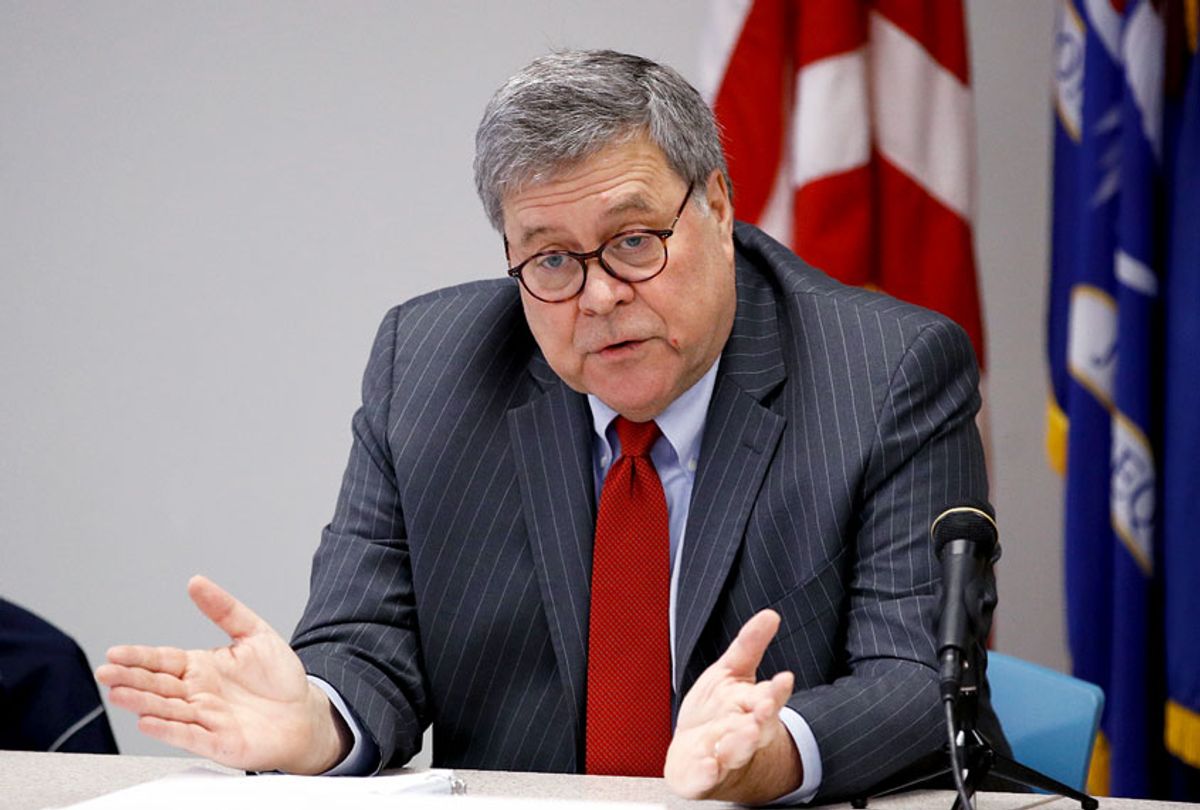 Allies of President Donald Trump have urged Attorney General William Barr to sue states for imposing life-saving mitigation measures to slow the spread of the new coronavirus, echoing a growing number of protests funded by right-wing donors aimed at undermining the restrictions.

Protests, some of which were organized by a network of right-wing gun rights groups and promoted by a conservative group linked to Education Secretary Betsy DeVos' family and Trump adviser Stephen Moore, raged across the country over the weekend as demonstrators accused governors seeking to slow the worst public health crisis in modern history of infringing on their rights by shutting down large swaths of the economy.

The protesters received support from Trump, who claimed that certain governors in states he called to "liberate" had "gone too far." However, the president failed to mention a single specific mitigation effort he opposed.

On Friday, the Conservative Action Project, a group that includes a wide range of Trump supporters, right-wing legal activists, Tea Party organizers, anti-abortion crusaders, and big business lobbyists, called on the Trump administration to take the protesters' fight to the courts and sue to force states to lift the restrictions, which medical experts and Trump himself have credited for saving millions of lives.

The group urged Barr to take action against the "rampant abuses" by governors and local officials.

"Petty, would-be, dictators are attempting use the crisis as an opportunity to flex their perceived new muscles at the expense of the Constitution and even telling citizens their right to protest such excess has been 'suspended,'" the group wrote. (In reality, there has been little policing of the protests, even though they violate social distancing guidelines and restrictions on large gatherings.)

The group listed a number of grievances about the policies, including claims that the stay-at-home orders had been used to close gun stores and crack down on religious gatherings.

"As the nation's chief law enforcement officer, we call on you to halt the spread of these unconstitutional orders and enforcement tactics against the American people," the group said, urging Barr to form a Department of Justice task force to review "all local and state orders," issue nationwide guidance that reflects "the Constitutional rights of the American people," request "voluntary revision or cessation of enforcement" of these policies and "initiate litigation to enjoin the enforcement of orders that are not narrowly tailored and which infringe upon the basic rights enshrined in the Constitution."

"We know well that you share our devotion to America's Constitutional liberties, and we are grateful that you are in a unique position to act decisively in their defense," their letter added.

Barr, a member of the Federalist Society, a secretive right-wing group which has been the engine behind Trump and Senate Majority Leader Mitch McConnell's efforts to stack the federal courts with young extremist jurists, has himself been an outspoken critic of the stay-at-home orders.

Barr complained to Fox News that the orders were "draconian" and led his department to intervene in the case of a Mississippi church barred from holding a drive-in Easter service. He vowed that the department would soon begin to review "restrictions on our liberty" more closely. And Trump's judicial appointees have taken a similar approach in court.

In Kentucky, Justin Walker, a recently-appointed judge Trump is believed to be "grooming for a Supreme Court nomination" despite being rated "not qualified" by the American Bar Association, rejected the state's restrictions barring a Louisville church from holding a drive-in service.

Walker did not allow the city to present its side of the case before launching into a rant accusing its mayor of having "criminalized the communal celebration of Easter."

In Kansas, Trump-appointed Judge John Broomes rejected Democratic Gov. Laura Kelly's ban on gatherings of more than 10 people at religious services even after the state's Supreme Court upheld the order after the Republican-led legislature voted to overturn it.

"The spectacle of having judges second-guessing the determinations of state health professionals serves Barr's and Trump's broader goal: to undermine the legitimacy and authority of governors, some of them Democrats in swing states, who have received far more robust public support for their effective responses to the pandemic than has Trump for his catastrophically late efforts," New York attorney David Lurie wrote at The Daily Beast. "The attorney general's latest effort to misuse the authority of the law . . . to help Trump out of a political jam is likely to have more immediate, and fatal, consequences."