Why Jane Goodall is hopeful for the future

Salon spoke with Goodall about finding faith in dark times and her new documentary, "Jane Goodall: The Hope" 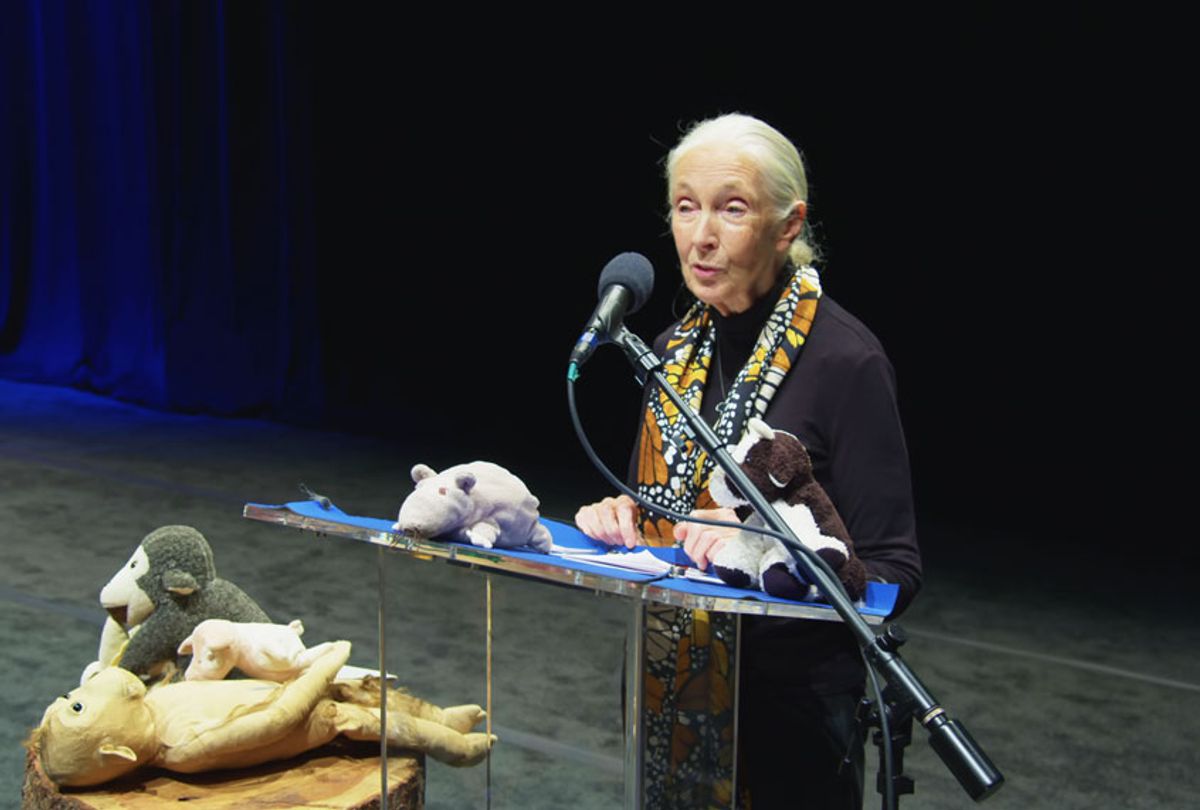 Dr. Jane Goodall's 60-year study of the Kasakela chimpanzee community in Tanzania's Gombe Stream National Park famously helped the world empathize with great apes. And since then, Goodall has never ceased serving as a public scientist with a social mission. Now, a new documentary, "Jane Goodall: The Hope," shines a light on her extraordinary life as an advocate for hominids — first chimpanzees, later humans. Starting in the 1980s, Goodall's public persona shifted, from scientist to an activist — a transition that forms the crux of the documentary.

Among scientists raising alarm bells about climate change and environmental devastation, Goodall has matured into a rare hopeful voice. Hence, Dr. Goodall is not an eco-nihilist like many of my generation: she thinks that humanity has what it takes to fix the climate crisis and repair the planet. As Goodall likes to say in interviews (including this one with Salon from 20 years ago), you have to reach the hearts and the minds of the people in order to make change happen — a philosophy she shares with other great science communicators like Carl Sagan.

"Climate change is happening. . .  if we lose hope, then we might as well all give up. . .  if we think there's no way forward as many scientists tell us, then eat, drink, and be merry for tomorrow we are going to die, but we musn't let it happen," Goodall says in the film. "My job is to inspire people and get them to take action; the message is, we are part of the natural world, and as we destroy the natural world we destroy our own future, not only wildlife."

True to her platform, the documentary — which premieres on April 22 at 9pm ET on National Geographic — is not about her fame or achievements, but about her view of the future. If I may draw an analogy, I believe Goodall is the Ruth Bader Ginsburg of conservation work. Not only because she is so dedicated to her work and her mission —even later in life —  but also because she is a symbol of hope for many.

Yet, like RBG, Goodall doesn't see herself in this way. Rather, she describes herself as the messenger, a deity on this human plane. She was "chosen" for this role, by something greater than us, which is a job she doesn't take it for granted — not even for a short rest. The 86-year-old is constantly on the go, only seeing family once or twice a year. Knowing that her schedule leads her to travel over 300 days a year, I asked Goodall: "What do you do for rest?"

"What does rest mean? I don't get it much; I suppose when I'm asleep, but sometimes with the problems we face today, sleep is a bit difficult," she told Salon. Even today, confined to her home due to quarantine, she is just as busy as ever. "I do try and get out for maybe, at least half an hour, now with the dog in the middle of the day, but the dog is old and he doesn't actually like going for walks; I could go without him, but that seems silly."

From the beginning of the documentary, viewers see that the life Goodall is living is that of a messenger. Certainly, if she had never been bestowed this role, she'd be back in the forest with the chimpanzees, or writing more. (She is an introvert, after all, as she admits freely.) Yet Goodall's work as a messenger is working, and the non-profit organization she founded in 1991, Roots and Shoots, is proof. What started as a small group of 12 students who would meet with Goodall to discuss environmental concerns in Tanzania has turned into a global movement active in over 60 countries. One member of the original twelve went on to serve as the minister of environment for Tanzania.

Goodall's conservation efforts haven't been without criticism. In the film, viewers see how Goodall would befriend unlikely suspects. She once called on James Baker, secretary of state for George H.W. Bush, to help save chimpanzees in the wild — all because Baker once said he was an avid hunter and loved nature. To her surprise, he became one of her biggest allies.

"I lost a lot of friends because of going into the labs, sitting down and talking to the people, organizing a conference to bring in the lab people, the scientists and also the animal welfare people," Goodall told Salon. "There were a lot of animal rights people who refused to speak to me — they said, 'Wow can you sit down with these evil people and have a cup of tea with them?' I was totally and completely flabbergasted."

"How can you expect anybody to change if you don't talk to them?" Goodall added. "Then, of course, it was equally important not to point fingers at them and tell them they were bad."

These lessons touch a particularly sensitive nerve in our "cancel culture" moment, when social cohesion and empathy are in low supply.

When asked how life might change after this global pandemic, Goodall remained cautiously optimistic.

"How I hope it [life] will change and how it changes are two different things in this particular case," Goodall said in an interview. "I think probably millions of people, especially those living in cities, have experienced for the first time what it's like to breathe fresh air and to see the stars at night, even to see wild animals at closer quarters; I think those people, and I think other people too, have seen this as a wakeup call that we've disrespected nature and we've got to start changing the way that we act and we've got to rethink the way we live."

"We've got to get away from this consumerism, materialism that puts economic development ahead of environmental protection, which is damaging the future generations of humans and animals," Goodall added.

While Goodall said it is important for individuals to think about how the choices they make impact the environment, there is another part of the story that will require everyone's attention to restore Earth — specifically, ending poverty.

"This thing of individual responsibility can never reach real fruition until we alleviate poverty, because when you are really poor you're going to cut down the last tree trying to feed your family or fish the last fish or buy the cheapest junk food if you're in the city because you just have to survive whatever way you can," Goodall said. Despite this, Goodall emphasized that everyone can make a difference, regardless of economic circumstances. "It's a basic message: every one of us makes some impact, everyday, even those in poverty."