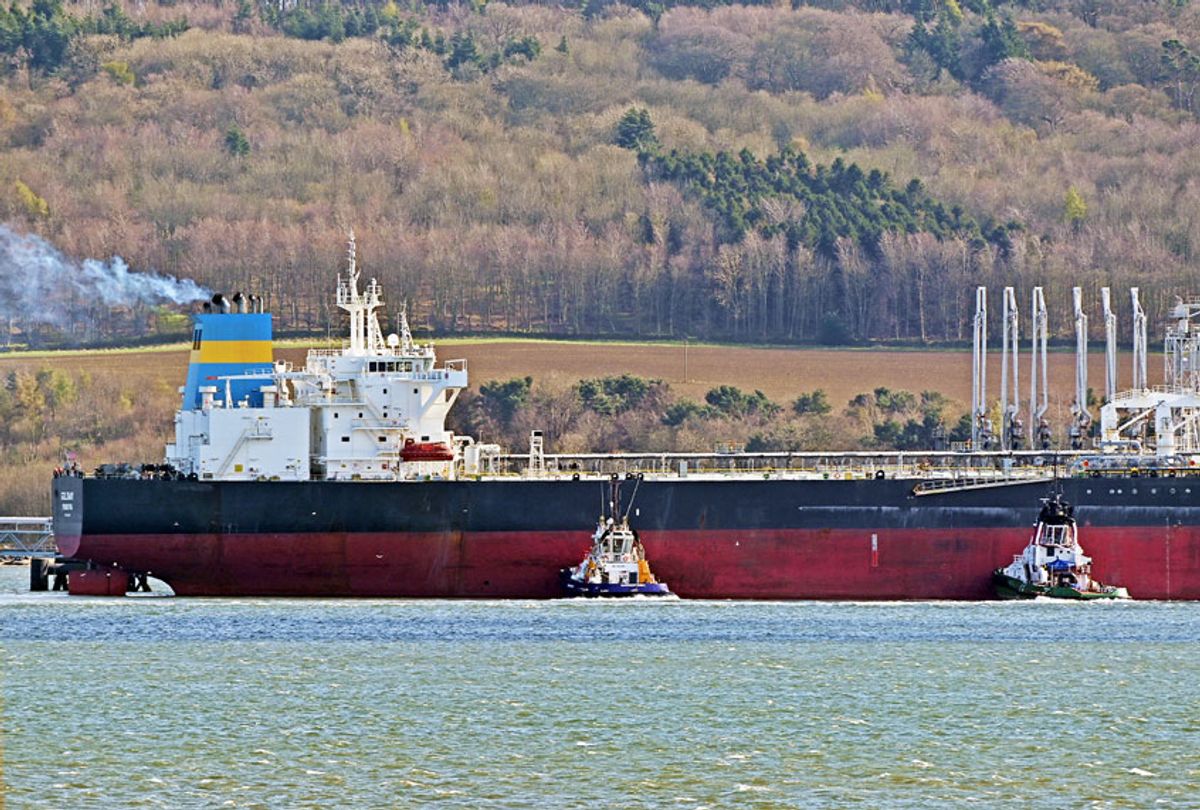 The Liberian-registered oil tanker Goldway berths at Hound Point Oil Terminal on the Forth Estuary, as uncertainty continues in the global oil market as a result of the coronavirus (COVID-19) crisis (Ken Jack/Getty Images)
--

The price of U.S. crude oil collapsed to below zero for the first time on record, falling to negative $37 per barrel and forcing oil producers to pay buyers to take the product off their hands.

As The Guardian reported last week, 160 million barrels of oil are being stored in tankers near shipping ports around the world due to the sharpest drop in oil demand in a quarter of a century because of the coronavirus pandemic and the resulting global lockdown.

Monday's freefall saw prices for May crude oil futures drop by almost 300% in a matter of hours. This came after extensive negotiations between President Trump, Russia and Saudi Arabia in which the U.S. president asked the two countries to cut their oil output by 10 to 15%.

The plummeting of oil markets on Monday, the last day oil producers can trade barrels for delivery next month, solidified a trend which has been evident since the coronavirus pandemic brought economies around the world to a halt last month.

Critics urged U.S. policymakers not to approach the collapsing markets as a problem that can be solved by propping up the oil industry. As David Roberts wrote at Vox Monday, the sector has been in decline for years and any taxpayer funds which go to propping it up further would be "wasted."

First, fracking was a financial wreck long before COVID-19 hit. U.S. fracking operations have been losing money for a decade, to the tune of around $280 billion. Overproduction has produced a supply glut, low prices, and an accumulating surplus in storage. ...

Both oil and gas prices were persistently low leading into 2019. Due to oversupply and mild winters in the U.S. and Europe, there is a glut of both natural gas and oil, such that the entire world's spare oil storage is in danger of being filled.

The fossil fuel industry, Roberts reported, is "furiously lobbying" for relief funds, but others on social media joined him in denouncing the possibility of a bailout.

Some climate action advocates reiterated earlier calls to nationalize the oil industry, a move which New Republic journalist Kate Aronoff said last month would "ensure the country's energy demands are met responsibly as it transitions to a net-zero-emissions economy, without the need to appease [fossil fuel] companies' shareholders."

"This is our chance to publicly own oil and gas companies," the Sunrise Movement tweeted Monday.

Roberts agreed that the collapse of oil markets represents an opportunity to begin a shift toward renewable energy in the U.S., but said Trump is not likely to heed the warnings of groups including the Center for International Environmental Law (CIEL), which wrote in a recent report, "The pandemic exposes and exacerbates fundamental weaknesses throughout the sector that both predate the current crisis and will outlast it."

"At best [policymakers] can slow down the transition to clean energy a bit. They cannot stop it," wrote Roberts. "Meanwhile, other countries will be establishing a commanding position in some of the biggest growth industries of the 21st century."

"It would be a shame to emerge from this crisis still clinging to the past rather than facing, and preparing for, the future," he added.