The U.S. is monitoring intelligence which indicates that the health of North Korean leader Kim Jong Un has faltered 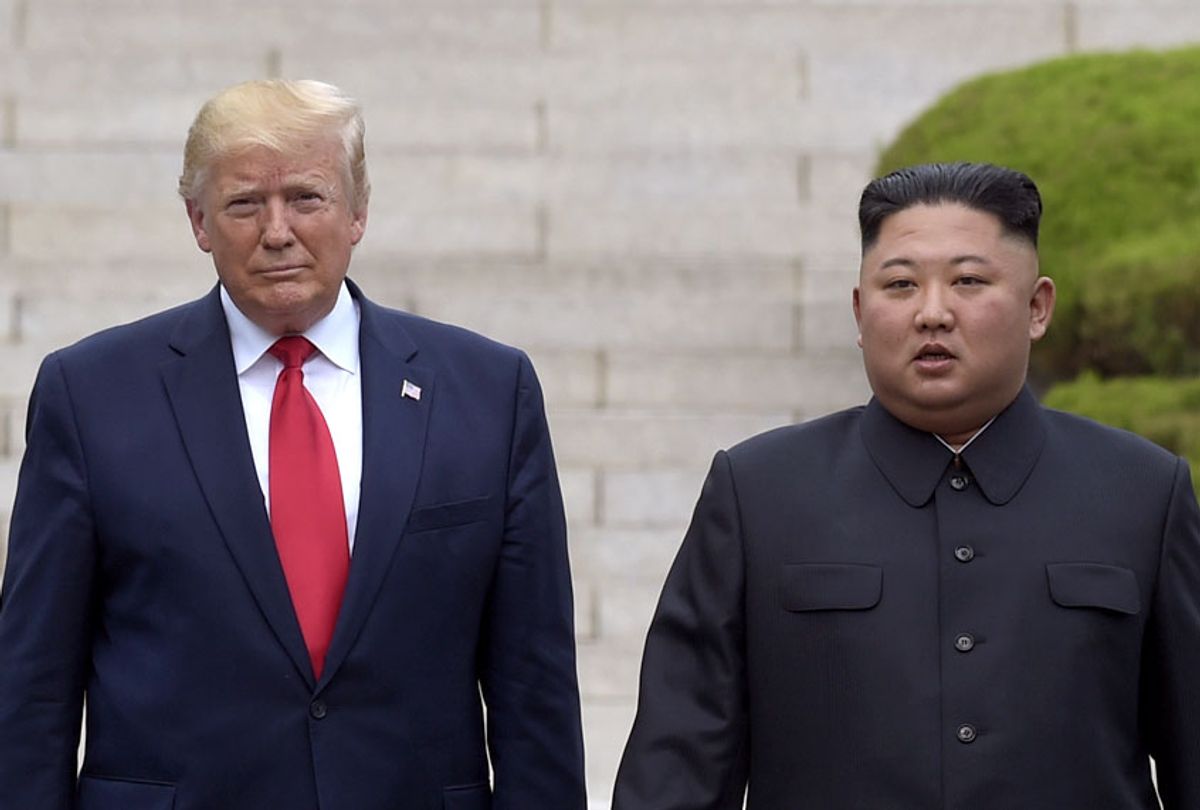 President Donald Trump meets with North Korean leader Kim Jong Un at the North Korean side of the border at the village of Panmunjom in Demilitarized Zone, Sunday, June 30, 2019. (AP/Susan Walsh)
--

The U.S. is monitoring intelligence which indicates that the health of North Korean leader Kim Jong Un has faltered. But South Korea has thrown cold water on reports that the dictator is "in grave danger after surgery," with the president's office saying it had "detected no special signs inside North Korea" so far.

It would not be the first time North Korea has been misread. The highly-secretive country is by design difficult to penetrate — for outsiders and its own citizens alike. The government purposefully obscures its activities, publishing disinformation and famously risible propaganda. And it has become even more difficult to sniff out the truth since North Korea sealed its borders in late January due to the coronavirus pandemic.

The current speculation began Monday night, when Daily NK, a Seoul website that monitors North Korea, reported that Kim was recovering from cardiovascular surgery earlier this month. A source from inside the regime reportedly said the North Korean leader had been experiencing cardiovascular difficulty for a few months as a result of obesity and heavy smoking but "worsened after repeated visits to Mount Paektu."

Kim's recent trips to Paektu — the dynasty's sacred volcano on the Chinese border — were heavily publicized within the country, including Putin-esque photographs and video of the 36-year-old dictator riding a stallion up the snow-covered slopes.

North Korea watchers raised questions about Kim's health on April 14. He failed to show for a cruise missile demonstration as part of his grandfather's birthday festivities, and state media did not cover the launch at all. Kim also did not pay a birthday visit to his grandfather's mausoleum the next day, an act which Cheong Seong-chang, director of the Center for North Korean Studies at the Sejong Institute in South Korea told the New York Times was "the closest thing to blasphemy in the North" and "all but unthinkable."

"It is reasonable to think that there is something temporarily wrong with his health, although it may stretch things too much if we say his life is in danger," Cheong said.

A Chinese foreign ministry spokesman told Reuters that the government knew of the reports but would not say whether it has any more information.

The confusion is useful to the weak regime, but it frustrates outside observers, who can get lost in rumors about torture, grisly executions and military development. Though it obscures and often overblows the truth, many of these concerns are well grounded in reality. Kim had his half-brother assassinated with a nerve agent in a Malaysian airport and reportedly executed musicians with anti-aircraft guns. The regime spends lavishly on its military and nuclear programs as millions of its citizens starve.

The family's poor medical history fuels speculation, too. Kim's father and grandfather both had diabetes, and both died of heart failure. Kim Jong-un disappeared for more than a month in 2014, sparking speculation about poor health, a coup or a massive hangover. He walked with a cane when he finally resurfaced, having had a cyst removed from his ankle.

But what if Kim really is deathly ill? North Korea is a failed nuclear state, and Kim — who has purged the government of all threats to his power — might be the only thing holding it intact, such as it is.

Some experts believe that his younger sister, Kim Yo-jong, could be the "natural heir to the throne." She has joined Kim in meetings with international leaders, including from China and the U.S. She traveled as North Korea's government envoy for the 2018 Winter Olympics in South Korea, and she again dove again into foreign policy a statement calling the South Korean president an "imbecile."

"She is the natural heir to the throne, as the Kim family regime is more a dynasty than republic," Lee Sung-yoon, a North Korea expert at Tufts University told The Times.

But other experts feel the North's rigid patriarchy would not accept a female leader, especially one so young.

"It takes time before a report on North Korea is proven right or wrong, and even if a story turns out to be wrong, there is little disadvantage for reporting it," Lee Won-sup, a former journalist who is now a professor of news media studies at Gachon University in South Korea, said in 2014.