A total inability to have empathy: The president refused to acknowledge any wrongdoing 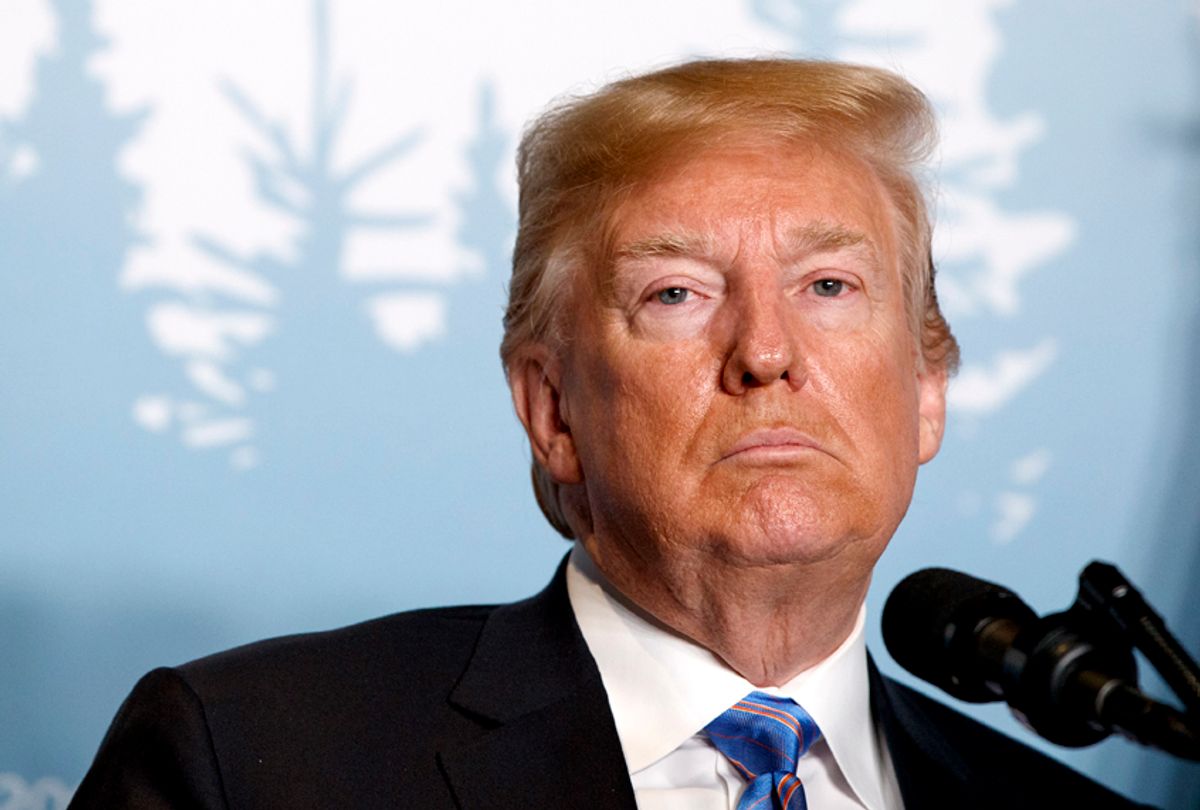 Donald Trump listens to a question during a news conference at the G-7 summit, June 9, 2018 (AP/Evan Vucci)
--

When President Donald Trump was confronted with the direct and dangerous consequences of his own actions of Monday, he immediately began boasting about his fan base and refused to acknowledge any wrongdoing.

It was a disturbing moment, and it seemed deeply revealing of his character.

The exchange came during Monday's coronavirus press briefing when PBS reporter Yamiche Alcindor pressed Trump on a family she had come across in her reporting.

"I interviewed someone who said that his family got sick, they went to a funeral in mid-March, and, they said — mainly — because the president wasn't taking it [the coronavirus] seriously," she explained. "He said: 'If the president had had a mask on, if he was saying we should stay home, then I would have stayed home. Instead —'"

"Well, I know, I understand—" Trump said, trying to cut in, but Alcindor continued. Trump impatiently bobbed his head while she continued her question.

"He said his family members were sick because they listened to you," she said. "Do you feel like you, or are you concerned that downplaying the virus maybe got some people sick?"

Trump seemed barely able to comprehend or process the question, given it put him in such a poor light. Without even actually responding to a word she said, the president awkwardly pivoted back to his fan base.

"And a lot of people love Trump, right?" he said. Of course, from the account Alcindor gave, it seemed the family in question may have been fans of the president themselves — at least until they got sick.

"A lot of people love me," Trump continued. "You see them all the time, right? I guess I'm here for a reason, you know? To the best of my knowledge, I won. And I think we're gonna win again. I think we're going to win in a landslide."

Trump then moved on to talking about the travel restrictions he placed on travelers from China on Jan. 31, and his subsequent move to restrict travel from Europe.

"So how could you say I wasn't taking it seriously?" Trump said.

Trump says "I cannot tell a lie" and then lies about testing (he claims the US has done more testing than all other countries combined, which is not true) pic.twitter.com/nDBalIce0d

But as I noted when he announced the European travel restrictions, Trump's messaging about the seriousness of the virus in the United States was entirely muddled. He downplayed the severity of domesticated cases, and his announcement made it seem — wrongly — that the problem was a foreign threat, rather than a domestic one. I explained:

Trump did, correctly, say that elderly people are most at risk, that basic hygiene measures can reduce the spread of the disease, and that "social distancing" measures — avoiding unnecessary contact with others or gatherings — may be necessary. But these remarks were clearly an afterthought to his focus on travel from Europe, and they did not convey the scope of social disruption that the virus is likely to have on American society.

And his record of downplaying the virus for the weeks prior to this is well-documented. So it's completely plausible that — as Alcindor reported — people who took Trump as a reliable source of information could have been misled into taking dangerous risks in March. It was only March 16 that the White House official announced socially distancing guidelines, but by then it was far too late for many people who were already infected and spreading the disease. And the message that Trump didn't take the infection very seriously had already been made loud and clear.

Trump has bungled the crisis in ways that go beyond his rhetoric. He had diminished the nation's pandemic response capacity prior to the outbreak, and he has failed to rally a concerted federal government approach to stopping the virus that the situation demands.

But his choice to downplay the virus for his fans and dismiss the measures that were necessary to stop its spread early on is the clearest case of how the president failed the nation — especially his own supporters. It's disturbing that, even when confronted with a clear-cut case of a family that blames their trust in Trump for their fate, he can't take a moment for self-reflection, empathy, or humility. He can't admit that he's made any mistakes. Instead, he starts rambling about the people that love him.

It demonstrates exactly the simplistic, sensitive, and self-obsessed mindset that made him downplay the virus in the first place. He psychologically rejects anything that is a threat to his identity and his status as illegitimate, and he tries to replace it with a more comforting narrative. Such a reaction to unpleasant information is flawed, immature, and maladaptive in any human being. But in a nation's leader, it is unbelievably dangerous.