How Mitch McConnell's threat against a "blue state bailout" could backfire 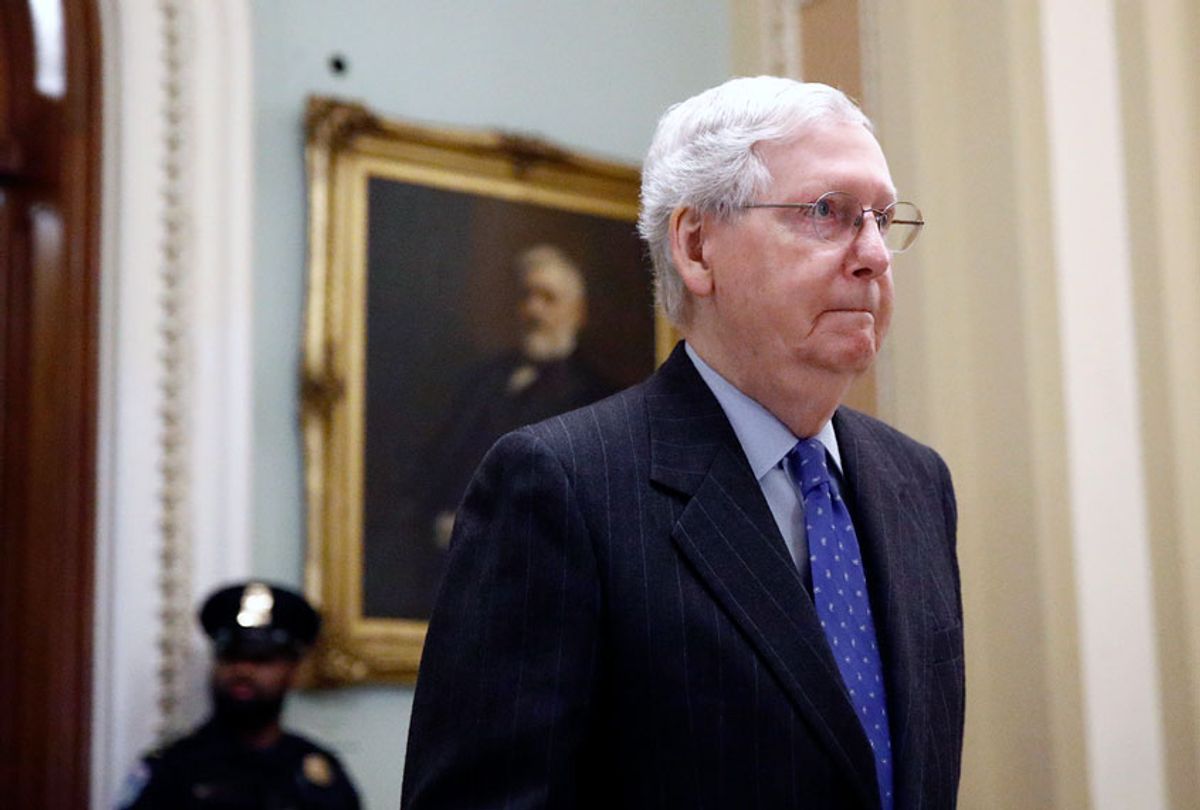 Senate Majority Leader Mitch McConnell staked out risky ground on Wednesday in an interview with right-wing radio host Hugh Hewitt with a callous dismissal of calls for Congress to support state and local governments amid the coronavirus pandemic and recession.

While many observers have argued the states will need federal support as their revenues collapse and their expenses spike, McConnell said he's more interested in letting the governments go bankrupt.

"I would certainly be in favor of allowing states to use the bankruptcy route," the Republican Majority Leader said. "It's saved some cities, and there's no good reason for it not to be available. My guess is their first choice would be for the federal government to borrow money from future generations to send it down to them now so they don't have to do that. That's not something I'm going to be in favor of."

Currently, states are unable to declare bankruptcy. And unlike the federal government, they're bound by tight budgetary constraints, so they can't simply start borrowing money in a crisis. That's why it's necessary for the federal government to step in at this time to support them and fill their budgetary shortfalls until the economic crisis has passed.

But McConnell is dismissing this notion, claiming that — after finding hundreds of billions of dollars to spend on suffering businesses — the national debt is a "matter of genuine concern." But with interest rates near zero and a crisis on the scale of the Great Depression looming, there's no better time for the federal government to borrow money. And McConnell was much less concerned about the budget deficit just a short while ago when he pushed through a $1.5 trillion tax break for corporations and the wealthy and let federal spending expand.

To make his newfound fondness for austerity more palatable to GOP voters, he tried to cast deficit hawkishness as a way to stick it to the Democrats. In a release from his office, McConnell referred to the calls for supporting state and local governments as "Blue State Bailouts," and he tried to blame overly generous public sectors for the shortfalls.

"I said yesterday we're going to push the pause button here, because I think this whole business of additional assistance for state and local governments needs to be thoroughly evaluated," McConnell said. "You raised yourself the important issue of what states have done, many of them have done to themselves with their pension programs. There's not going to be any desire on the Republican side to bail out state pensions by borrowing money from future generations."

This stance from McConnell is callous, shortsighted, and potentially self-destructive. It's just not the case the only blue states will need help in the coming months — every state is going to suffer financially. Without support, that means gigantic cuts to critical state programs and jobs, including teachers and police. Leaving these people out of work, and disrupting the functioning of state governments, will only exacerbate the economic crisis we've been thrown into. That's true whether a state is red or blue.

And even if it were just blue states that needed help, McConnell's attitude would be catastrophic for everyone. The United States isn't going to prosper if the economies of states like California, New York, and New Jersey are in free fall. The nation's economy is deeply interconnected, and many Democratic-run regions contribute an outsized portion of economic growth. Leaving major states to scramble for themselves and fail to fulfill their financial obligations could tumble us into a depression. That's bad for everyone, and most immediately, that's bad for Trump in 2020 and McConnell's beloved Senate majority, who are likely to bear the costs if Americans head to the polls in November with the country's economy in shambles.

Fortunately, it's not clear how much leverage McConnell actually has in this matter. House Speaker Nancy Pelosi seems to genuinely want to provide states and local governments with support, and she's been negotiating with the Republican official who has seemed most reasonable since the economic crisis began: Treasury Secretary Steve Mnuchin. He appears to recognize that it's in the administration's best interest to save the economy, so he's less committed to abiding by GOP orthodoxy or an "own the libs" mentality. And if Mnuchin gets Trump and Pelosi on board with a plan to save the states, it's not clear McConnell will actually be able to stand in their way.