"I don't know of anybody more powerful at this point in history than you are," O'Reilly tells Hannity 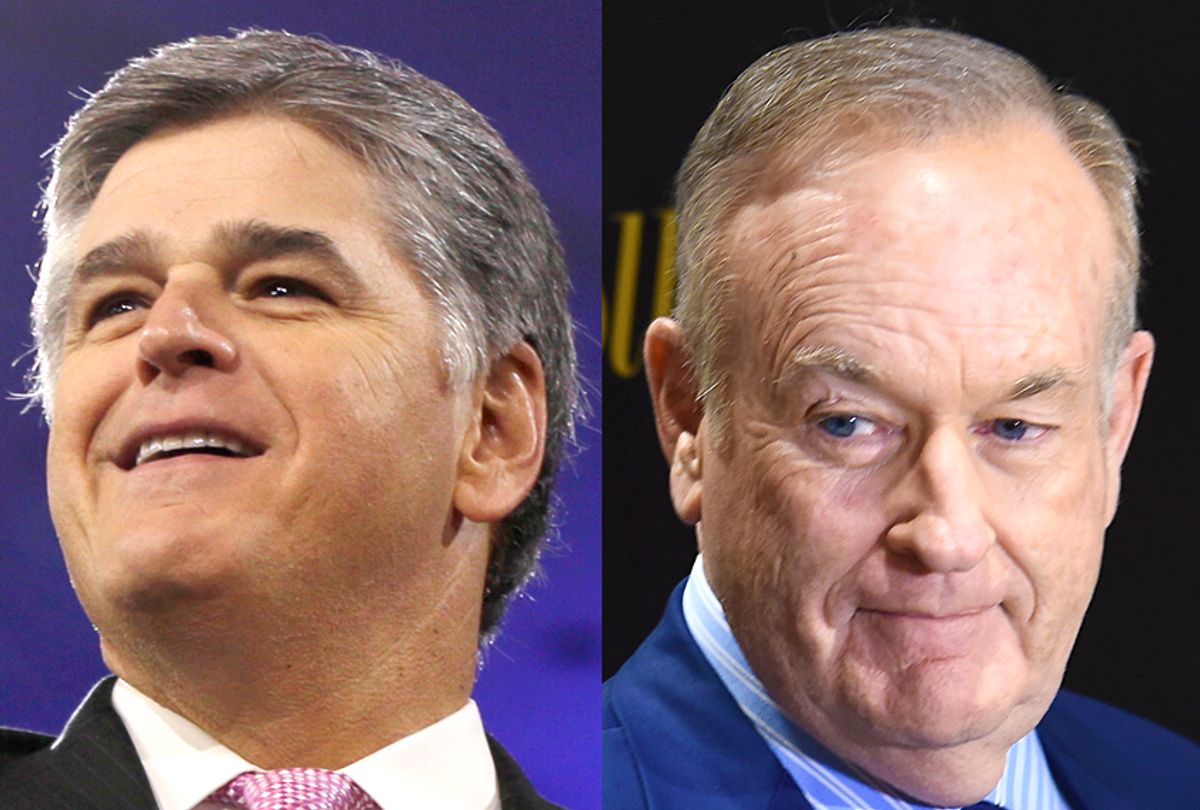 Disgraced former Fox News host Bill O'Reilly declared his ex-colleague Sean Hannity to be "the most powerful guy in the country," because President Donald Trump does "half the stuff" the the commentator covers on his primetime show.

O'Reilly appeared Wednesday on Hannity's radio show, where he asked the host to pitch the president a plan to restart major sports leagues without fans in the stands by May 15.

"Now, I want you to tell President Trump to do this, or me and you are going to have to come down there to the White House. And he doesn't want that," O'Reilly, who was ousted from Fox News after he and the network paid tens of millions to settle numerous sexual harassment lawsuits, joked.

"I love how you say, 'me.' I mean, you're Bill O'Reilly. You pick up the phone. You're a simple man. Call the White House, and tell the president," Hannity responded.

"Oh, stop that is not — by the way, that is not true," Hannity insisted. "I will tell you this about Donald Trump. Donald Trump — you know this, you've know him like I have for decades — he does listen way more than people think. But he makes up his own mind, Bill. Just like nobody can really tell you what to do either — let's be real."

"But he respects your perspective," O'Reilly said. ". . . Not just you. But if you, Hannity — I think the most powerful broadcaster right now in the country. I'm not just saying that, Hannity. You know, I mock you all the time. But I don't know of anybody more powerful at this point in history than you are."

"You're the most powerful guy in the country — if you tell him, the president, with all due respect," O'Reilly added.

Despite Hannity's attempt to downplay his relationship with Trump, the Fox News host has been a close adviser to the president since his 2016 campaign, according to The New York Times. Since taking office, Trump has regularly spoken to Hannity on the phone in the morning and late at night, often after Hannity's primetime show airs, according to The Washington Post.

The president has been known to cite Hannity when he has discussions with White House officials. Hannity "basically has a desk" at the White House, one Trump adviser told The Post.

And the two have been on the same page since the beginning of the coronavirus pandemic, initially downplaying the threat posed by the virus before ultimately relenting in the face of overwhelming evidence. Hannity has since echoed Trump's hype of the anti-malarial drug hydroxychloroquine as an unproven treatment for the new coronavirus. However, both have largely gone silent on the drug amid questions over its effectiveness and potential side effects.

Hannity is just one of the president's advisers at the news network. Trump, who has frequently hired former Fox News employees to administration positions, reportedly came around on the coronavirus after warnings from host Tucker Carlson. He also took his cues on hydroxychloroquine from Carlson's show.

Former Trump strategist Steve Bannon said in December that Carlson is one of Trump's most influential advisers.

"If you don't think Tucker Carlson has more influence on national security policy than many of the guys on the National Security Council, you're wrong," he said, according to The Daily Beast.

However, Trump's closest adviser at a Fox brand may be Fox Business host Lou Dobbs, who frequently espoused similar views on immigration and trade before Trump ever ran for president.

Dobbs has been "involved with some of the administration's more sensitive discussions," according to The Daily Beast. Trump has even put Dobbs on speakerphone at multiple Oval Office meetings so the host could weigh in on policy, according to the report, which added that Trump would occasionally "cut off an official so the Fox Business host can jump in."