The COVID crisis is reinforcing the hunger industrial complex

Why end hunger when anti-hunger work is so profitable to all parties? 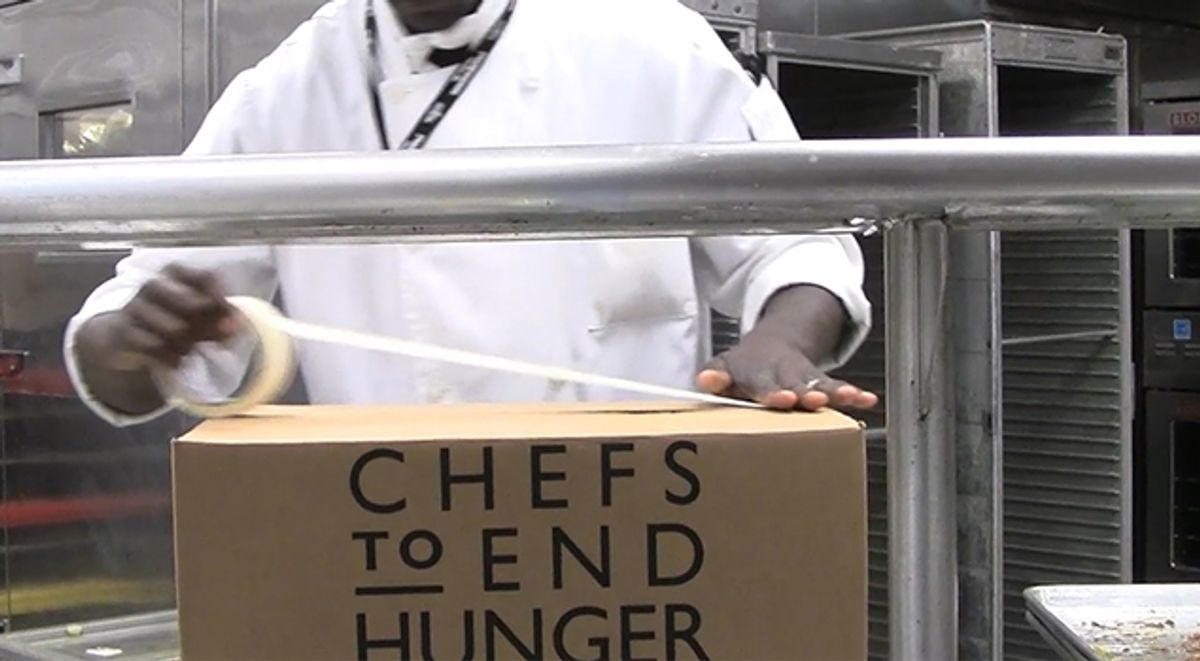 Even before the Covid-19 pandemic, normal wasn't so great for the working poor in America. Despite a 10-year recovery, 12 percent of the nation remained food insecure in 2018. The minimum wage stagnated at $7.25 in 21 states. Low wages, unstable schedules, soaring rents in many cities, and limited or no health benefits all added up to a precarious economic situation for tens of millions of Americans.

The state of affairs was so economically unsustainable that food banks doubled their distribution from 2009 to 2019 to 5.25 billion pounds, serving 40 million people.

And now in 2020, with 22 million people thrown out of work in just a few short weeks and an administration unable to muster much empathy for their plight, much less the cash to keep their refrigerators stocked, food banks have stepped in again to fill the void left by an absentee government. This time, however, food banks have gained more visibility, not just as the safety net under the (shredded) safety net, but as a front-line response. The miles-long lines of motoristswaiting for a few sacks of groceries have become seared into the public imagination, a meme of the collective isolation and powerlessness many of us feel in the hands of an incompetent government. Charity has become the governing metaphor of the pandemic response, replacing justice, which itself has been placed on a ventilator.

But the food to feed people and the money with which to buy that food has to come from somewhere. And just as it has for the past few decades, it's the alliance between anti-hunger organizations, the USDA, and corporate America, or the hunger industrial complex, that provides. It is this paradigm that is filling the vacuum left by Trumpian sociopathy, and as James Bailey, a management professor at George Washington University says, "Every crisis creates a void. And whatever force fills that void, inherits power."

We should all be concerned that, in the post-pandemic era, the hunger industrial complex becomes more robust at the expense of the movement for fair wages, strong nutrition programs, and universal health care. We should be concerned about the growth of charity because, frankly, the unholy alliance between food banks and corporate America has shown itself to be more interested in maintaining the problem of hunger than actually solving it. Hunger is, after all, good for business.

Consider this: When I was conducting research for my book "Big Hunger," I found an almost unanimous refusal on the part of the nation's 200 food banks to advocate for upstream policies, such as higher minimum wages, that would reduce the number of people needing food banks in the first place. These policies would reduce the profitability of the labor-intensive grocery industry, on whom food banks rely for board members, technical expertise, food, and cash. They would also reduce the need for large food banks, some of which have footprints as large as a Home Depot store. A look at the makeup of their boards shows just how deep the corporate influence runs: 22 percent of members, I found, work at a Fortune 1000 company or its private sector equivalent.

The existence of this unholy alliance poses the fundamental question of: "Why end hunger when anti-hunger work is so profitable to all parties?" Through supporting anti-hunger organizations, corporations reduce their labor costs, garbage disposal fees, and tax bills while building their reputations as socially responsible firms. Like the medieval practice of indulgences that allowed the rich to donate to the Church for a pass into Heaven, these donations whitewash corporations' hunger-causing business practices to allow them to appear as hunger fighters.

For food banks, hard times are good times. Their fundraising soars during recessions, and all too often they measure their success in the number of pounds that they distribute. The more pounds they give out, the more they appear to be successful, the more they can appeal for donations. The larger they are, the easier it is to justify the corporate scale salaries that food bank executives make, reaching in some cases half a million dollars or more.

During the Covid-19 crisis, Big Food and Ag are doubling and tripling down on the hunger industrial complex as a way to enhance their reputation. Consider the following examples: Smithfield, the nation's largest pork producer, has donated $3 million and 10 million pounds of protein to food banks in the wake of the pandemic. It's also been sued successfully multiple times for its environmental racist practices of sitting its hog factories next to impoverished African American farms. And it has come under fire for propagating the pandemic at its Sioux Falls, SD, processing plant, where over 500 workers have fallen ill with Covid-19.

At Amazon, CEO and world's richest man Jeff Bezos recently donated $100 million to Feeding America, the nation's food bank trade association. Amazon is both poised to be one of the two largest redeemers of online Supplemental Nutrition Assistance Program, or SNAP, sales, and has been revealed to be the largest employer of SNAP recipients in multiple states.

Walmart is the only other national retailer allowed to sell groceries to SNAP recipients online in a lucrative multi-state pilot project. This is a company, let's not forget, that famously paid its workers low-wages and encouraged them to rely on food banks and SNAP to make ends meet. Yes, it donated billions of pounds of surplus items to food banks — and recently threwanother $10 million into the food bank pandemic pot — but not for nothing: It also captured a generous tax deduction.

It's not just individual corporations that are donating money and food. USDA has committed increasing amounts of cash and commodities to food banks, reaching some $4 billion by the time of writing. Much of these funds will be contracted out to agri-businesses such as Del Monte and Tyson, two of the largest vendors in the USDA Foods program.

It is easy to be awed at the scale of this humanitarian endeavor that is rolling out across the American landscape, appreciative of the community spirit manifesting itself in the donations of cash, food, and volunteer time that are fueling these efforts. Nonetheless, one must ask, like Archbishop Hélder, about the causes of the inequities that fuel this massive demand, and about its implications for the future of eliminating hunger in America. Already we are seeing many food banks retrenching, eliminating their small social justice-oriented programs in favor of mobilizing all hands on deck to deal with increased demand.

Going back to the old normal is no longer a tenable choice. The hunger industrial complex needs to be diminished in favor of a stronger government response — one that strengthens the social safety net while guaranteeing living wages and better working conditions for all.

Andrew Fisher has worked in the anti-hunger field for 25 years, as the executive director of national and local food groups, and as a researcher, organizer, policy advocate, and coalition builder. He is the author of "Big Hunger: The Unholy Alliance between Corporate America and Anti-Hunger Groups."