Florida senator mocked by Trump led the GOP's charge to undermine the Affordable Care Act. It was all in vain 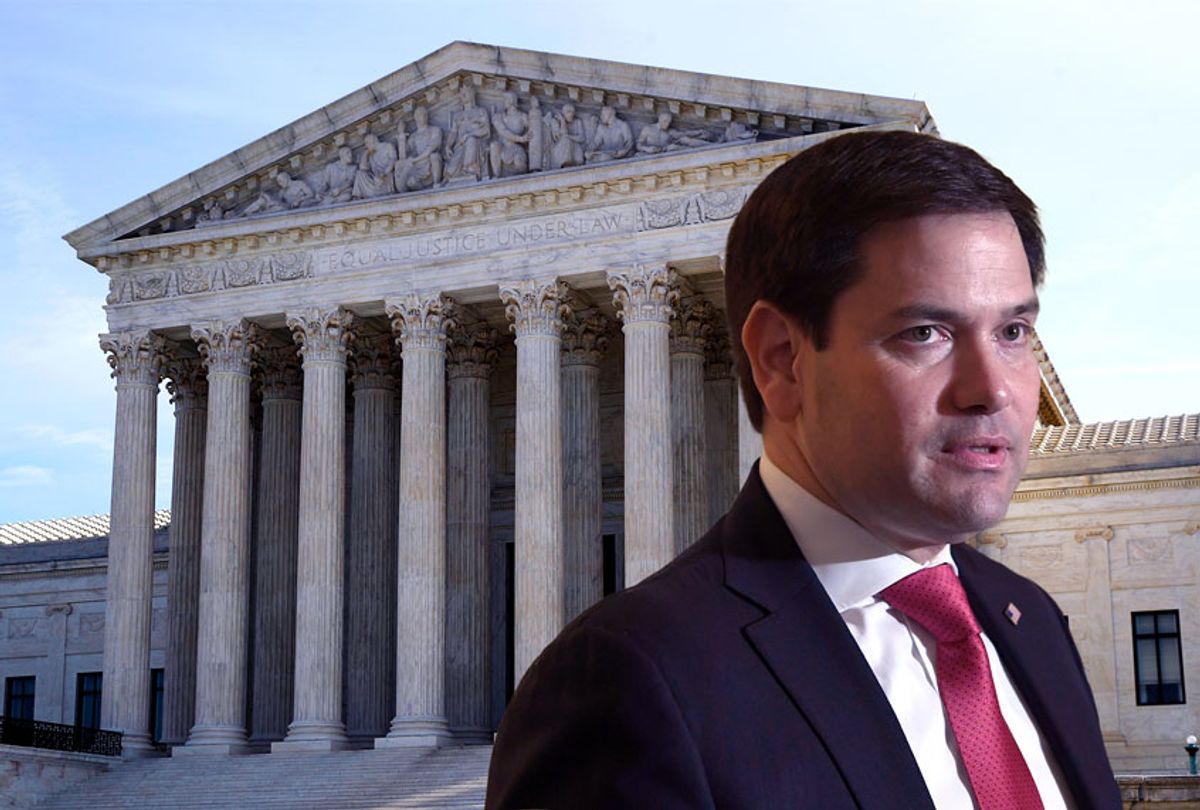 "Q: Did Marco Kill Obamacare?" asked a 2015 tweet from the presidential campaign of Sen. Marco Rubio, R-Fla., before presumptively answering the question: "A: You bet he did."

OK, so who wants to tell him?

Rubio, like his fellow failed presidential aspirant Sen. Ted Cruz of Texas, staked his campaign on bringing down Barack Obama's signature health care law, the Affordable Care Act (ACA). Rubio began his specific effort to sabotage the law in 2013, a few short years after entering the Senate and before setting out to win the White House. Seven years later, the Supreme Court made clear what was otherwise evident then: Rubio and his fellow Republicans didn't kill Obamacare, they only made it a bigger mess.

While Cruz's infamous stunt to undermine the ACA by shutting down the government — complete with his 2013 reading of Dr. Seuss's "Green Eggs and Ham" on the Senate floor — proved he was willing to "troll the libs" at any cost, Rubio's less flashy legal assault was meant to cement his status as the Obama-slayer.

At the time, Rubio was still making an attempt to burnish his Tea Party bonafides. As congressional Republicans unsuccessfully voted to defund the ACA more than 50 times he went on the warpath against an obscure portion of the law meant to safeguard participating insurance companies against crippling financial loss as a result of the new requirement to cover clients with pre-existing conditions. Under what was known as "risk corridors," the law helped some companies defer the cost of lower premiums in the early days of the ACA marketplaces. If an insurance company priced its plans less than 3% below a set target, the government would cover the losses. Conversely, an insurer that benefited from millions of new customers under the law's individual mandate had to pay its excess profits to the government. Ultimately, the goal was to entice more insurers on the markets, leading to lower prices for consumers. Like the ACA itself, risk corridors have a Republican pedigree and were even included in George W. Bush's Medicare Part D program.

Still Rubio picked the program to push forward his presidential ambition by promoting what he thought would prove a poison pill to the larger health care law.

Decrying it as a "taxpayer bailout," he testified against risk corridors as the star witness at a House Oversight Committee hearing and penned op-eds against the program. In a classic case of a solution in search of a problem, Rubio claimed that the ACA was suffering a "death spiral," an actuarial term used to describe a marketplace spinning out of control, to push for the demise of the law's infrastructure. Although Rubio didn't actually sponsor the provision in Congress' 2014 appropriations bill that prevented the federal government from using certain funds to make the required payments to insurers, he took credit for it. The Rubio-inspired provision also required the program to become budget-neutral.

The Republican rider effectively pulled the rug out from under insurers. After companies had already locked in their 2015 rates on the assurance of a government stopgap, Congress changed the rules such that the federal government could only afford to pay 13 cents of every dollar owed to the insurance companies. Insurers compiled an overall loss of $5.5 billion the year after the Republicans blocked one avenue of funding. The risk corridors were a temporary program, which expired after 2016, but insurers ultimately lost $12 billion due to Rubio's shenanigans.

"So far, we've succeeded in stopping the Obama administration from bailing out healthcare companies under ObamaCare, and it's critical that Congress once again stand with taxpayers to stop any taxpayer bailout of health insurers from happening," Rubio wrote to Republican leadership at the time.

As lawyers for the insurance companies argued before the Supreme Court, Rubio and congressional Republicans orchestrated "a massive government bait-and-switch." Republicans weren't able to muster the votes to repeal the ACA outright, so they just tried to bail out on the law's statutory obligations. The end result was weakened Obamacare markets with fewer insurers and higher premiums. Premiums that, as the Supreme Court just ruled, must still be subsidized by the federal government.

On Monday, the Supreme Court voted in an 8-1 decision against Rubio's gimmick to take down Obamacare. Justice Samuel Alito was the sole dissenter, arguing that the decision provides "a massive bailout for insurance companies that took a calculated risk and lost." Writing for the majority, Justice Sonia Sotomayor relied on what she called "a principle as old as the nation itself: The government should honor its obligations." Republicans in Congress could not simply decline to fund the program, the Supreme Court ruled. The government still has to pay insurers $12 billion all of these years later.

So the man Donald Trump derided as "Little Marco" didn't win the White House, and didn't kill off Obamacare either. He simply drove small insurers out of rural America, leaving many coverage areas with no competition in the marketplace. In effect, he created a monopoly by driving out small insurers, quite likely so he could attract Koch brothers funding for his ill-fated presidential campaign.

Of course this was all eminently predictable, according to a plain reading of the relevant laws and long-standing jurisprudence. But Rubio's insistence on a vanity campaign that cost millions of dollars and denied millions of people access to affordable health care feels like more than a pathetic afterthought now, as our embattled health care system struggles to meet the challenge of a global pandemic. The GOP had seven years and never came up with a plan of their own.