Stay home or reopen? We can avoid Trump's fake choice with a big, bold stimulus

Trump and the Republicans are offering only bad choices. Thinking big can beat the virus and save the economy 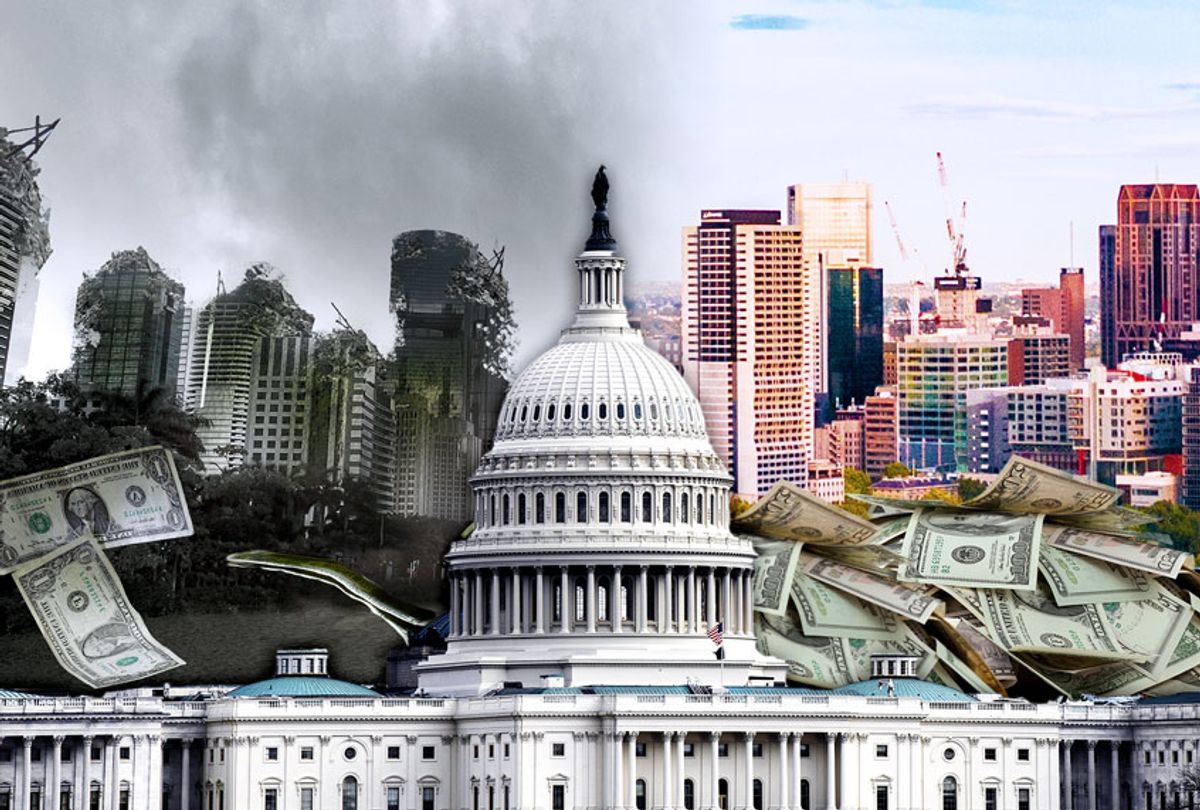 How do we move forward economically? (Photo illustration by Salon/Getty Images)
--

One of the most insane bits of propaganda being injected into the dual coronavirus and economic catastrophes of the moment is the Trump-marketed gibberish about how "the cure can't be worse than the problem." It's an infuriatingly simplistic zinger, condensing myriad complexities into a facile bumper-sticker slogan that will ultimately result in more dead Americans.

There's a better solution that we'll get to presently, but "the cure," in the context of Trump's zinger, is of course the stay-at-home mandate being exercised in most states. The worry, according to Trump and his disciples, is that maintaining social distancing and therefore keeping Americans safe — the "cure" — will precipitate a worsening economic calamity.

To be clear, the president isn't concerned about anything but re-election. The only way to fully understand the actions of King Joffrey the Bloated is to view everything through the prism of the general election. Every action by Trump and his White House is exclusively geared toward re-electing him — and therefore keeping him out of prison. The theory is, that the longer we're all quarantined in our homes, the worse the economy will become, and the more imperiled Trump's chances for a second term will become.

Indeed, "the cure can't be worse than the problem" could be the official slogan of Trump's death cult, in which "there are more important things than living," and in which it's better for people to get sick or even die than to manifest further damage to the economy, and thus to Trump's re-election chances.

In reality, it was Trump's quivering cowardice in the face of the virus that significantly worsened both the spread of COVID-19 and the economic fallout of the quarantine orders. Had the "cure" been launched two weeks earlier, the death toll might have been reduced by as much as 90 percent in his country. No, Trump didn't create the virus, but the lack of an early, effective response is on him all the way. If he were the alpha-male his fanboys say he is, he'd 'fess up and own it instead of squirming around like a trapped weasel.

Nevertheless, we're all confronted now with a binary choice: Either we "reopen" prematurely, risking an unacceptable resurgence of the virus, or we remain at home, risking worsening joblessness and damage to the overall economy.

Risk: Worsens the spread of the virus, increases the death toll, puts more strain on essential workers and forces the reauthorization of stay-at-home orders to stop the renewed spread. In that event, any short-term economic benefit will be totally negated when the economy has to shut down again as COVID-19 strikes more Americans. Ultimately, what Trump and his copycats are begging for here is an endless cycle of opening and closing.

Reward: Slows and eventually stops the spread, saving lives and allowing for an eventual safe reopening.

Risk: Businesses continue to close as workers and customers alike remain in lock-down. The economic impact already looks to be at least 16 percent unemployment and a 5.6 percent contraction of the economy by the end of 2020.

Now, for us "normals," option No. 2 is much more palatable in nearly every way. Not only is this the preferred solution among the experts, but it's also the easy-to-grasp common sense solution. Are there risks in continuing the stay-at-home orders until the epidemiologists and other public health experts give us the go-ahead? Sure, and those risks are calculable. But the risks for option No. 1 are unacceptable to anyone who's not a blood-oath member of Trump's ignoramus death cult, widely seen at protests over the past 10 days or so.

The irrational death cult aside, let's go with option No. 2 as the less risky solution that literally saves countless lives, while leading to a safer and more confident reopening of the economy — but a little later than is acceptable for Trump and his squirmy radicals.

Your response now might be: What about jobs and the economy as a result of No. 2? There's a third, perfectly valid solution here. You probably won't hear about this option from Republicans or Fox News analysts, because it involves icky things like math. But let's take a look anyway.

Reward: Continues to slow the spread, saving lives while bending the curves in the proper direction. There's minimal risk to lives and hospitals, while creating jobs and mitigating a recession.

Risk: A massive budget deficit and subsequent increase in the national debt.

We could nickname this one the "Keynesian option." Unlike the other two options, the pain isn't absorbed by the economy or by the people, but instead absorbed by the federal government, which is one of the reasons why it exists in the first place: to do all the things enumerated in the Preamble to the Constitution.

Another big, dramatic stimulus could buy the economy more time while the stay-at-home orders continue to bend the curves downward — the best of both worlds in the midst of these impossible circumstances.

The $2 trillion CARES Act was a step in the right direction, but it isn't large enough to continue blunting the sting of the shutdown. To anyone paying attention, it clearly needs to be followed by at least another $2 trillion, if not significantly more. That might take the form of a set of New Deal-style programs, including, for example, Andrew Yang's "minimum guaranteed income," at least temporarily; public works projects and the resurrection of the WPA (with distancing guidelines); a World War II-style jobs mobilization, especially given the "we're at war" metaphor, to create PPE, consumer items and other essential supplies; small business lease and debt relief; virtual retraining for green economy jobs; expansion of food stamps and unemployment benefits; expanded COBRA, ACA and Medicaid subsidies, and so on.

How will this spending translate to economic growth? During the previous recession, a macroeconomic model developed by Moody's Economy.com determined that for every dollar spent on, say, temporary increases in food stamps, $1.73 in economic stimulus is created. Likewise, every dollar spent on extending unemployment benefits generates $1.64 in stimulus. A dollar in infrastructure spending creates $1.59 in stimulus, while a dollar invested in state governments generates a $1.36 return to the economy. Conversely, Trump's idea for a payroll tax holiday that would damage Social Security and Medicare will only create $1.29 in stimulus — while every dollar spent on cutting the corporate tax rate will only generate 30 cents in stimulus — a 70 percent loss. All told, spending government money on the right things, in the near term, will generate a significant return on investment.

Trump lies all the time. But math doesn't.

From there, once the experts tell us the stay-at-home orders have done the trick and it's time to get back to some new version of normal, some of these programs can be phased out, while other programs could be integrated into the job landscape, benefiting American life and reinforcing the health of the economy. Meanwhile, deaths are held to a statistical minimum and the duration of the pandemic is significantly shortened, rather than facing an endless loop of premature opening and then closing again, accompanied by more death and more strain on PPE supplies and health care workers.

If you're more concerned about the budget deficit and the national debt than you are about saving the economy without killing people, then you need to think about reprioritizing your values. Being a fiscal hawk is fine — when tens of thousands of Americans aren't dying because of it. We can address government spending and all the problems it allegedly causes when both the economy and the safety of the American people permit it.

Speaking of which, it's wildly unlikely, of course, that Trump and Mitch McConnell will pass the kind of spending package we really need. Republicans will continue to do the absolute wrong thing by rushing to end stay-at-home orders, triggering all the accompanying downsides, killing more people while damaging the economy well beyond the damage that would have been created by simply staying at home. They have, however, already approved $2 trillion in stimulus, so perhaps that — along with poll numbers that suggest a GOP bloodbath in the fall — will change their minds. Despite what the protesters and Fox News are saying, I'm not sure the Republican leadership is all that willing to sacrifice their own voters for the sake of the deficit. Given that Trump's and McConnell's deficit before the pandemic had already topped $1 trillion, that doesn't appear to matter much to them anyway.

But today, right damn now, we're all being crushed inside a relentless trash compactor, stuck between human suffering and economic suffering — the choice between staying at home to save lives or returning to work to save the economy. Another massive economic stimulus, perhaps comparable in 2020 dollars to Franklin D. Roosevelt's New Deal, will stop the walls from closing in. By spending our way out of the crisis, Trump's false choice between the "cure" and the "problem" is resolved, by allowing the "cure" to mitigate both the health crisis and the economic crisis. Meanwhile, the downside — the cost of the cure — can be addressed once we're out of danger. If we do the right thing now, while we still can, we'll be out of danger sooner than later.