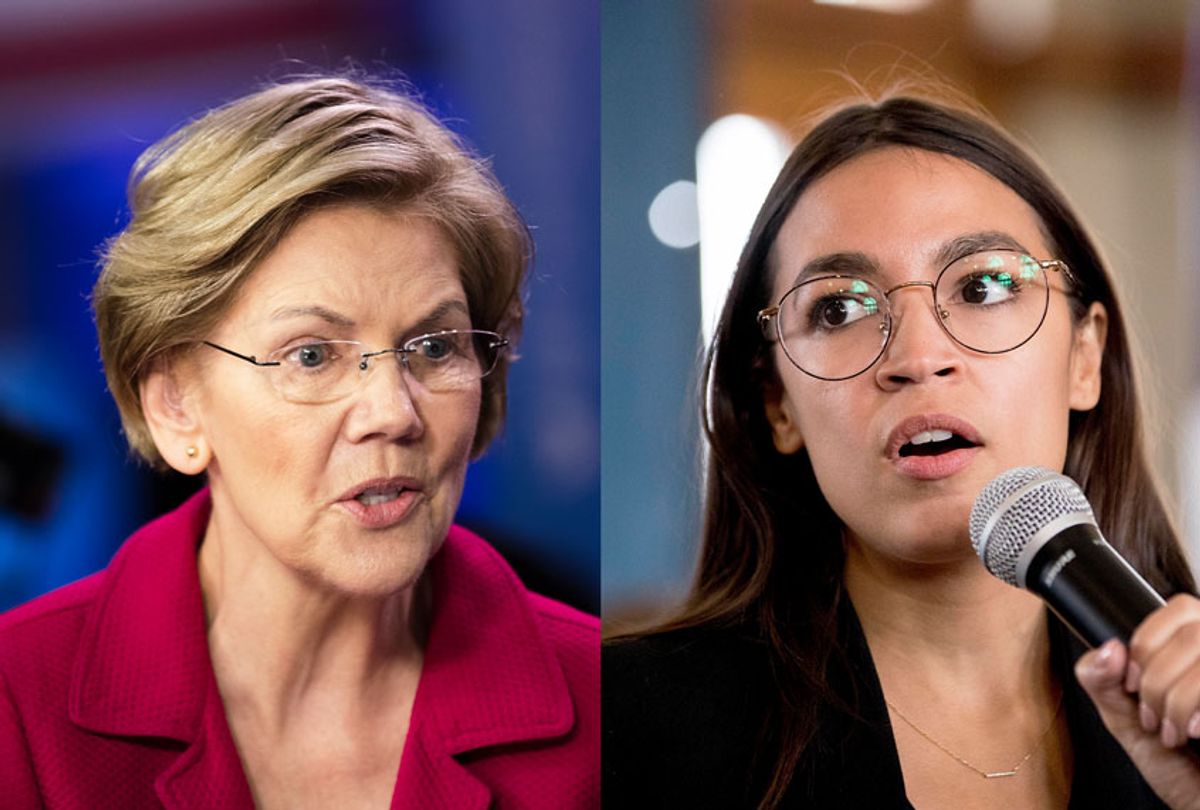 Intent on protecting working people and small businesses from "oligarchic" legislation that favors wealthy corporations as the coronavirus outbreak continues to rage across the U.S., Rep. Alexandria Ocasio-Cortez and Sen. Elizabeth Warren joined forces Tuesday to propose a bill that would ban mergers and acquisitions while the U.S. is facing the pandemic.

The Pandemic Anti-Monopoly Act would impose a moratorium on corporate mergers until the Federal Trade Commission (FTC) "unanimously determines that small businesses, workers, and consumers are no longer under severe financial distress," according to a press statement from Warren's office.

Firms with over $100 million in revenue or market capitalization would be barred from acquiring or merging with smaller companies, as would private equity companies, hedge funds, and companies with exclusive patents on materials needed to combat the coronavirus pandemic such as personal protective equipment (PPE) for healthcare providers.

"As we fight to save livelihoods and lives during the coronavirus pandemic, giant corporations and private equity vultures are just waiting for a chance to gobble up struggling small businesses and increase their power through predatory mergers," said Warren. "We're introducing legislation to protect workers, entrepreneurs, small businesses, and families from being squeezed even more by harmful mergers during this crisis and any future national emergency."

Halting mergers while small businesses across the country have been unable to secure loans after banks gave preferential treatment to wealthy corporations and while tens of millions of Americans have been laid off or furloughed due to the pandemic, Ocasio-Cortez tweeted, is "the LEAST we should do...to slow the consolidation of sectors."

The proposal comes a week after Rep. David Cicilline (D-R.I.) called for the next economic relief package to include a ban on "mega-mergers."

"The last thing our country needs right now is expending valuable resources in response to a wave of mega-mergers during a time of crisis," said Cicilline.

Warren and Ocasio-Cortez proposed the Pandemic Anti-Monopoly Act in response to reports that several large companies began planning mergers and acquisitions as the coronavirus pandemic overwhelmed healthcare workers and spread rapidly to every state in the country over the last two months.

As The American Prospect reported last month, management consulting firm Bain & Co. offered a guide to executives on the pandemic, which included the line: "During and post this crisis, [private equity] firms will be presented with unique opportunities to invest—important to be ready to act."

Rite Aid is also reportedly examining a possible merger, and Apple purchased the weather app Dark Sky last month and will only allow users with iPhones to use the app, potentially threatening jobs and leading to higher costs for consumers as companies eliminate their competition.

"These companies should be using their cash reserves to help their employees, not to acquire more power," said Ocasio-Cortez. "If we don't stop predatory M&As now, the actions of big corporations will have decades-long economic consequences—for all of us."

"We cannot allow mega-corporations and private equity vultures to exploit the coronavirus crisis and entrench their already immense economic power," the group said on Twitter.

Others on social media applauded the legislators for proposing the moratorium and strengthening the FTC's ability to prevent corporate mergers during times of crisis.

Ocasio-Cortez and Warren plan to introduce the legislation in Congress once lawmakers are back in session.