As the coronavirus wreaks havoc with hospital finances, wealthy hospitals are sitting on millions of dollars 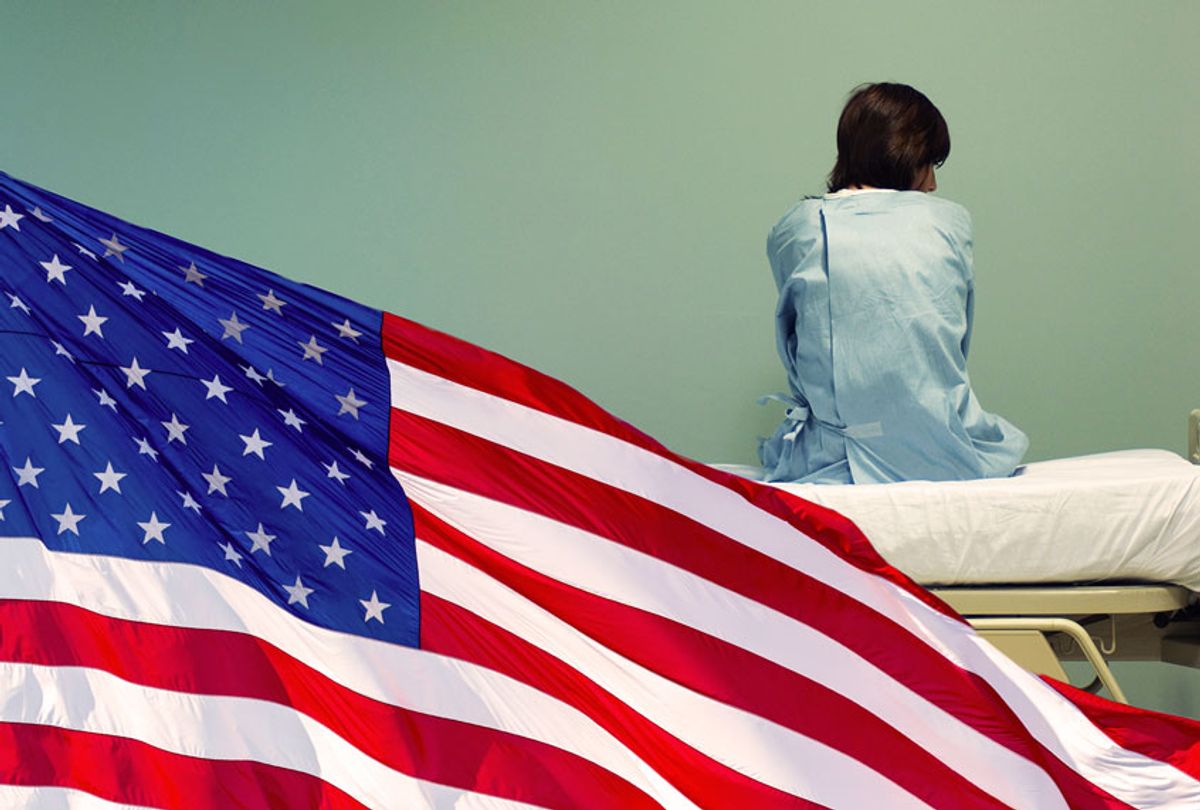 Inova Health System, with campuses in some of the wealthiest suburbs of Washington, D.C., and Truman Medical Centers, a safety-net hospital in downtown Kansas City, Missouri, have little in common. But, today, they are confronting the same financial plague: mass cancellations of nonessential surgeries that are their biggest moneymakers while bracing for an expensive onslaught of coronavirus patients.

Yet Truman has less than a month's worth of cash reserves to keep it afloat while Inova entered the outbreak with enough money to operate for at least 21 months, according to Inova's financial disclosure for 2019, before the stock market decline. At that time, Inova told its bondholders it had $3.1 billion in investments it could liquidate within three days. Tapping any of that may never be necessary because Inova also drew down its entire $238 million line of credit earlier this year to prepare for the pandemic.

"At the end of the day, not all hospitals are created equal," said Charlie Shields, Truman's president and CEO. "If you were sitting on a year of … cash on hand, that would not be as challenging, but most safety-net hospitals are south of 25 days, and we're probably around 10. How do you manage through that?"

But Dr. J. Stephen Jones, Inova's president and CEO, said, "Our finances are a mess at this point," with the system postponing non-urgent treatments and eliminating 427 administration and management positions.

"This is an existential threat to every health care organization, no matter how strong they come into it," said Jones, who cut his own salary by 25%.

As the coronavirus wreaks havoc with hospital finances, wealthy hospitals sitting on millions or even billions of dollars are in a competitive stampede against near-insolvent hospitals for the same limited pots of financial relief. Those include the $175 billion bailout fund Congress allotted for health care providers as part of two recent coronavirus packages and loans from private banks.

Certainly, even the richest hospitals are having their balance sheets despoiled by a triple punch: the stock market slump, the cost of preparation for coronavirus patients and the cessation of profitable surgeries, which is costing many hospitals half or more of their revenues. Inova, for instance, has spent $32 million to buy personal protective equipment and install negative air pressure systems in 200 hospital rooms, Jones said. (As of Monday morning, the system had 323 coronavirus patients.)

But unlike safety-net and smaller hospitals, many big health systems have the resources to stay afloat without financial assistance through the summer and beyond. Half of the 284 hospitals whose bonds Moody's Investors Service rated in 2018 had enough cash on hand to cover six months or more.

They also don't have to rely for survival on revenue from only treating patients. Before the stock market drop, 365 hospitals — about one of every 13 — reported an investment portfolio exceeding $100 million, according to a Kaiser Health News analysis of hospital cost reports from 2018 filed with Medicare. Together, those investments pumped $2.8 billion into those hospitals that year.

"A lot of the big hospitals have developed fortress balance sheets since the financial crisis" of 2008, said Chas Roades, co-founder and CEO of Gist Healthcare, a consulting firm. "The reflex is to protect the operation." But, he said, "if that's a rainy day fund, it's raining pretty hard right now."

The wealthier hospitals face sacrifices that other hospitals might envy, such as having to postpone ambitious building projects or adding to their already large investment portfolios. They are less concerned with running out of money than with depleting their cash reservoirs so much that their credit ratings would be downgraded, which could lead to higher borrowing costs.

"Most would prefer to have a line of credit than liquidate a stock holding," said Lisa Goldstein, an associate managing director at Moody's.

UCHealth, a 12-hospital nonprofit system in Colorado, has temporarily stopped contributing to its investments, which as of the end of last year totaled more than $544 million in cash and liquid investments and $4 billion in long-term investments, according to its financial disclosure report. Even before the pandemic, it had been stockpiling extra cash to build an 11-story tower at the University of Colorado Hospital in Denver that will cost $388 million, said Dan Rieber, UCHealth's chief financial officer. The system has enough liquidity to operate for more than 300 days without any new income and has obtained new lines of credit.

But when large health systems draw down those lines of credit, it makes it harder for smaller hospitals to get private aid because lenders may be tapped out, said Christopher Kerns, a vice president at Advisory Board, a health care consulting firm. "In our own discussions with lenders, there's only so much cash that's available, and that is putting the squeeze on the small or midsize organizations, and they are finding themselves very crushed," Kerns said.

The federal Health and Human Services Department has not made financial leeway assets a factor in deciding how it will distribute the $100 billion bailout fund passed in March. The department is doling out the first $30 billion based on how much each health care provider was paid by Medicare last year. The department plans to distribute the remaining money with an eye toward the prevalence of coronavirus infections in a hospital or region, and in the number of low-income and uninsured patients. The latest federal stimulus package — signed by President Donald Trump on Friday — added $75 billion to the relief fund.

"There isn't a mechanism right now to distinguish between the exceedingly well-endowed hospitals and those that are struggling," said Dan Mendelson, founder of the consulting company Avalere Health and a private equity investor.

The association representing safety-net hospitals, America's Essential Hospitals, has urged that cash reserves be a factor in divvying up the money, which is widely viewed as insufficient to cover all hospitals' costs. Some member hospitals have fewer than 10 days of cash reserves and run on average margins of 1.6%, a fifth of the industry average, according to the group.

"Our hospitals are struggling now to manage surging patient volume, staff and supply shortages, and other severe challenges as their limited cash reserves dwindle," Dr. Bruce Siegel, the association's president, said in a statement.

Certainly, even the wealthiest hospitals are seeing their robust balance sheets being turned upside down. Following the guidance of the federal government, UCHealth has postponed elective surgeries, leading to a drop in business of 50% to 60%. Elizabeth Concordia, UCHealth's CEO, said the system expects that it will not completely rebound even when the pandemic has diminished because many older people will be reluctant to return for elective surgeries for fear they might become infected with the coronavirus.

She said UCHealth is also on the front lines of fighting the pandemic. It currently has admitted 240 COVID-19 patients, more than any other Colorado hospital, and has been analyzing tests for rural hospitals without yet setting a contract for how much it will be reimbursed. It has also maintained its 25,000-person workforce without imposing pay reductions or furloughs.

"COVID is having a devastating impact on all of our finances," Concordia said.

But for those hospitals with their own wealth, investment earnings can provide a buffer that most hospitals don't have. In a forthcoming paper in the Journal of General Internal Medicine, researchers at the Johns Hopkins Bloomberg School of Public Health led by Ge Bai found that nearly all investment earnings for nonprofit hospitals were earned by just a quarter of the hospitals. Without that amount, their aggregate net income would have been 31% lower.

Investment income made up 5% of the total revenue for Trinity Health, a 92-hospital Catholic system based in Michigan and operating in 22 states, according to its financial disclosures to bondholders covering the last six months of 2019. Those investment earnings of $468 million accounted for 58% of Trinity's surplus.

As of December, Trinity had $9.6 billion in cash and investments, enough to operate for six months. It also reported credit lines totaling $1.2 billion. Trinity did not respond to requests for comment.

The wealthier hospital systems are strongly positioned to take full advantage of whatever method the government sets for distributing the remainder of the bailout funds. They employ more reimbursement staff and have in place sophisticated methods to document every expense that they can attribute to the coronavirus response, said Simone Rauscher Singh, an assistant professor at the University of Michigan School of Public Health.

"The big hospitals are ramping up their capacity to document all this so they can go back later and say, 'This is what we spent,'" she said. "The small hospitals are going to be in an even worse position to do that."