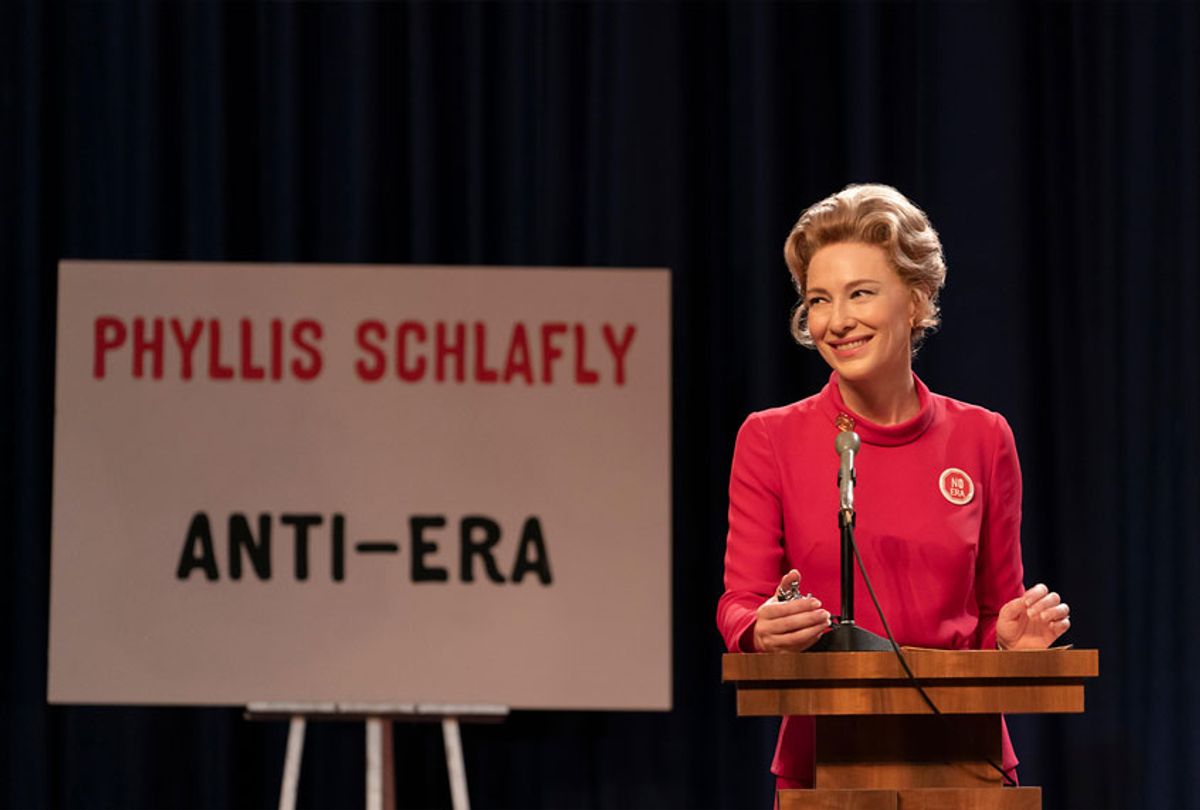 Make no mistake about the choice to put the character of Phyllis Schlafly, the real-life villain who organized the right-wing movement that stopped the passage of the Equal Rights Amendment, at the center of "Mrs. America," the new FX on Hulu miniseries about that battle: The show is under no illusions about what a monster Schlafly was. As feminist writer Kate Harding wrote in her newsletter, the show's portrayal of Schlafly belongs to a "genre everyone seems to love when it's about men: the villain's origin story." Schlafly may not have a mustache to twirl, but her smugness, condescension towards other women, dishonesty, and arrogance radiate out of Cate Blanchett's almost eerily accurate performance.

At times, the character is reminscient of — who else? — Donald Trump, whom the real-life Schlafly adored, and who spoke at her funeral. It's no wonder, because it's quite likely that without Schlafly, there would be no Donald Trump. Schlafly was instrumental in the creation of the trolling style of right-wing politics, the kind that, as I argue in my 2018 book "Troll Nation," slowly consumed the Republican Party until conservatism stood for nothing but destructiveness and spite.

It's a story that "Mrs. America" captures perfectly. Indeed, the show is not just the best portrayal I've ever seen on scripted TV of how right-wing trolling works, it's possibly the only show I've seen that truly gets it.

The fourth episode of the series that was released last week — the fifth episode is out on Hulu on April 29 — is titled "Betty," after the author of Betty Friedan (Tracy Ullman), whose book, "The Feminine Mystique," is widely credited with kicking off the second wave of feminism. At the center of the episode is a question that plagues left-wing movements to this day: How do you deal with right-wing trolls that are trying to take you down with bad faith tactics?

Because, make no mistake, a troll is exactly what Schlafly was. She had failed as a congressional candidate and wasn't taken seriously as the foreign policy expert she imagined herself to be, but she was able to channel the spite and resentment that a lot of white-bread Americans had towards feminists for exposing how much the fantasy of white picket fence domestic bliss they'd been peddling for so long was a lie.

Schlafly's arguments against enshrining gender equality were fatuous, and deliberately so. Her entire style was to be provocative and mean-spirited, to provoke an emotional reaction from her feminist opponents, which she could then use as gloating evidence that she'd gotten to them. They didn't have the phrase "trigger the libs" back then, but that was exactly what Schlafly was doing.

In this fourth episode, Schlafly goes into her debate with Friedan with a troll's heart, kicking off her opening remarks with a joke about how she'd "like to thank my husband Fred for letting me come here today," a joke that she often made in real life, because "I know it irritates women's libbers more than anything else."

And instead of arguing against equality on the merits, Schlafly dives right in to trolling, telling the "girls" in the audience that feminism isn't going to score them romantic love (no one said it would!), before turning to Friedan and mocking her for her husband leaving her for a much younger and more submissive woman, and calling Friedan "the unhappiest woman I have ever met."

Friedan explodes in rage, calling Schlafly a "witch" and saying, "I'd like to burn you at the stake." (This really happened.) The debate, it seems, has been won by the troll, because she provoked an emotional reaction — she triggered the liberal.

It's a jarring but accurate portrayal of the methods of the right-wing troll. First, they wind their liberal opponent up with nasty accusations and bad faith arguments and, when the liberal opponent finally succumbs to the irritation and snaps back, the troll declares victory. But, as the show demonstrates, that is truly unfair. Friedan may have been careless in her language, but she's not wrong: Schlafly was a deeply nasty person. And Schlafly was there to destroy everything that Friedan had spent her life trying to build. Why shouldn't Friedan be upset?

There's one way to win an argument, and then there's her way. Watch new episodes of #MrsAmerica every Wednesday, exclusively on #FXonHulu. pic.twitter.com/hRZQ25Fyac

Still, the exchange points to the paradox at the heart of dealing with the troll, which the characters on the show openly debate. If you acknowledge and debate them, you are giving credence to their bad faith arguments — and you're setting yourself up to be provoked into an emotional reaction that will be used by the troll to declare victory. But if you ignore the troll, they can spread their lies and bad faith arguments unimpeded, recruiting among the similarly sadistic and the just plain stupid people. Heads, the troll wins. Tails, you lose.

Throughout the episode, Friedan and Gloria Steinem (Rose Byrne) argue over how to handle Schlafly's trolling. Steinem's instincts are to ignore Schlafly, and not elevate her profile by even acknowledging her publicly, much less debating her. Friedan takes the sunlight-is-the-best-troll-disinfectant approach, which, unfortunately leads to her public humiliation at Schlafly's hands.

But just because Friedan face-plants when dealing with her troll doesn't mean her instinct to take the troll head on was wrong, Steinem learns. That's because Steinem ends up dealing with a troll of her own: Al Goldstein, the viciously misogynist publisher of the porn magazine "Screw," who launched a harassment campaign against Steinem and "Ms Magazine" in the '70s, which included distributing drawings made to look like a nude Steinem that read "Pin the Cock on the Feminist." Clearly, the mentality that led to the 4chan trolls with their frog cartoons and dog-piling of feminists on Twitter existed, in spirit at least, before the internet was even invented.

The incident clarifies an unfortunate fact about trolls: They can troll even if you do try to ignore them. Steinem and the staff at "Ms" are portrayed as not even knowing who Goldstein was or what his magazine "Screw" was about. But he didn't need their attention in order to demonize and debase Steinem all over New York City. And so, even as Friedan is learning the dangers of engaging trolls, Steinem is changing her mind from Team Ignore to Team Take Them On — she allows a "Ms" journalist to report on Schlafly's growing movement.

Ultimately, the show itself doesn't land on an answer on whether to ignore or fight the trolls. In part, that's likely because there isn't a good answer. Troll strategies have colonized the entire American right precisely because they're so difficult to defeat. The troll simply has a couple of strategic advantages that liberals don't have: Shamelessness and amorality.

But that doesn't mean all hope is lost. The episode ends on a quietly sweet note, with Steinem reaching out to Friedan and thanking her for all she's done. The power of a good argument and progressive organizing shouldn't be underestimated, either. Trolls are destructive, but the left can create progress that is strong enough to defeat them, if they stick together.

Leading a movement is a full-time job. Watch a new episode of #MrsAmerica on Wednesday, exclusively on #FXonHulu. pic.twitter.com/VoKJqzzWPA