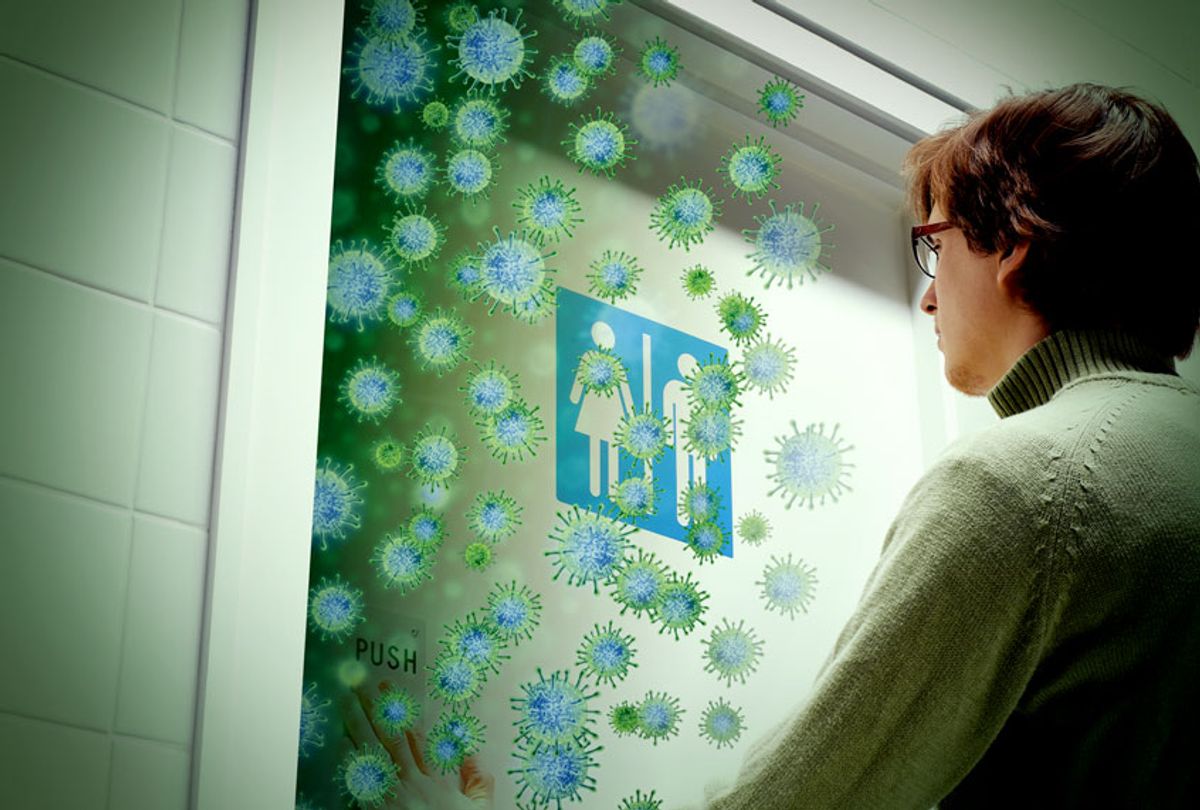 Hospital workers treating COVID-19 patients are known to face a higher risk of acquiring the novel coronavirus that causes the disease. Yet the nature by which the virus spreads is still poorly understood, hindering experts' ability to completely limit transmission. Now, a new study published in the journal Nature provides some clues as to the rooms and environments that coronavirus spreads more readily. The study looked specifically at hospitals and the different rooms within, along with the nature of ventilation.

In the study, Chinese researchers monitored the presence of airborne SARS-CoV-2 RNA at two hospitals in Wuhan, China, both of which were treating COVID-19 patients. They observed that, in general, more ventilated hospital areas had a low concentration of aerosols — meaning tiny particles of the virus that are carried by air. Conversely, less ventilated areas, such as bathrooms in patients' rooms, had elevated concentrations of the viral particles.The sampling was conducted between February 17 and March 2, 2020.

"The concentration of SARS-CoV-2 RNA in aerosols detected in isolation wards and ventilated patient rooms was very low, but it was elevated in the patients' toilet areas," the authors wrote in the peer-reviewed study. "Levels of airborne SARS-CoV-2 RNA in the majority of public areas was undetectable except in two areas prone to crowding, possibly due to infected carriers in the crowd."

The authors of the study state that the virus "may have the potential to be transmitted via aerosols." Yet the good news is that the research suggests that "room ventilation, open space, sanitization of protective apparel, and proper use and disinfection of toilet areas can effectively limit the concentration of SARS-CoV-2 RNA in aerosols." In other words, with a bit of sanitization, the coronavirus aerosols were gone.

Still, the study has a few caveats. Just because coronavirus RNA aerosols were detected does not mean that they consisted of a complete virus that might infect someone. Likewise, the concentration of particles seems to play a factor in infection. Dr. Jennifer Kasten, an Ohio pathologist with a degree in infectious disease epidemiology, told Salon in an email it "stands to reason that locations with more virus would be areas where transmission would be more likely to occur."

"The study authors point out that the patient care areas themselves in both the existing and the field hospital had negative pressure ventilation . . . . only the bathroom area in the hastily constructed field hospital had higher concentrations of viral RNA, at 19 copies per cubic millimeter," Dr. Kasten said.

According to the researchers, the particles in this bathroom may have come from "the patient's breath or the aerosolization of the virus-laden aerosol from patient's feces or urine during use."

Dr. Kasten said it's important to note, like the authors do, that this "does not necessarily mean infectious virus was detected — only the viral RNA." The complete SARS-CoV-2 virus consists of both the RNA genome as well as structural proteins that envelope the RNA.

So do unventilated areas, with detected SARS-CoV-2 aerosols, put people at a higher risk of transmission? That is not entirely clear from this study, but scientists have gotten closer to figuring that out. Kasten said one reason a study like this fails to get to the bottom of the mystery around coronavirus and aerosol transmission is because they still do not know exactly how many viral particles are needed to infect a person. Indeed, figuring out such a thing might not be ethical, at least on human subjects.

"Unless people want to volunteer for experiments where increasingly large amounts of virus are shoved up their nose until they become infected, the exact precise number isn't known and won't be except through animal studies," Kasten explained. "Instead it is estimated from the other 'baddy' human coronaviruses, and then assumed to be lower, since this one is much more transmissible."

For instance, a similar virus also in the coronavirus family, the MERS (Middle East Respiratory Syndrome) coronavirus, is known to require somewhere between 1,000 and 10,0000 viral particles in order to infect a person. Since SARS-CoV-2 is more transmissible, Willem van Schaik, a professor of microbiology at the University of Birmingham, estimates that the number of particles needed to become infected is in the high hundreds or low thousands.

Likewise, it is unknown if aerosols are even "hardy" enough to generate an infection.

"This new paper still doesn't quite get us all the way to answering the big question — because again, are the investigators detecting infectious virus, or just RNA?" Dr. Kasten asked. "And the amounts detected in most of the sites were extremely low — way, way below the threshold for an infectious dose."

However, if we assumed that all of the aerosols found in the study were still alive and capable of infecting, transmission would only happen if a "perfect sequence of events" occurred, which would require the infectious dose threshold to be met.

"So the crucial question is: how hardy is the virus, and how well can it withstand drying out?" She added: "There's no debate at all as to whether or not aerosols are generated (they are), whether or not they contain virus — at least at first (they do), and whether or not a particularly violent sneeze can propel them across a room (it can)."

This is all to say that just because aerosols are being detected doesn't mean they can infect you.

The airborne qualities of the coronavirus has stoked controversy. Belgian and Dutch engineers published findings, which went viral, that suggested people should maintain 16 feet behind someone who's walking. This study made a Harvard epidemiologist's "blood boil," according to Vice, because its theoretical underpinnings lay in aerodynamics — not virology.

Interestingly, there are more studies that suggest transmission is more likely to happen indoors, not outdoors. A study in Japan concluded that "the odds that a primary case transmitted COVID-19 in a closed environment was 18.7 times greater compared to an open-air environment."

While researchers say there is still a lot to learn about transmission, they are confident that it spreads from being in close contact with infected people, and through touching infected surfaces.