It wasn’t flawless television, but the socially-distanced bonus episode was perfect for the moment we’re in 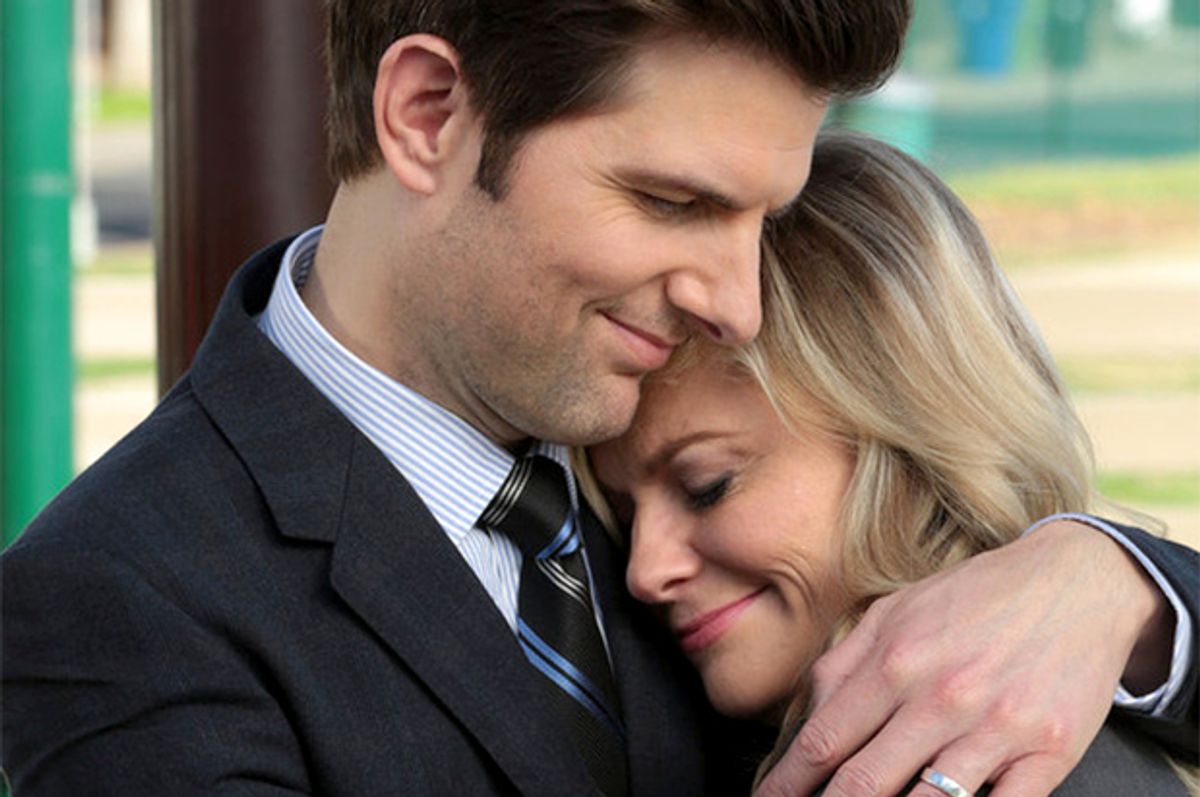 Adam Scott and Amy Poehler in the "Parks and Recreation" series finale. (NBC)
--

"This is not the way TV is be supposed to be made."

This was Michael Schur, co-creator of "Parks and Recreation," on a call with reporters earlier this week to discuss the improbable creation and production of "A Parks and Recreation Special." The half-hour bonus episode of the beloved NBC comedy, which aired its series finale back in 2015, was conceived as a way to raise money for Feeding America. Written by Schur and many other "Parks and Rec" alums, and featuring virtually the entire cast(*), plus familiar friends who guest-starred in the original run, the special was designed and shot to accommodate the ongoing quarantine. The action takes place during the COVID-19 pandemic, and the actors all filmed their parts separately using iPhones. The plot, such as it exists, involves Poehler's superhumanly optimistic civil servant Leslie Knope checking in on all her loved ones during this time of crisis.

(*) Paul Schneider's Mark Brendanawicz remains conspicuously erased from the series' institutional memory, and there was no cameo by Billy Eichner, whose high-strung Craig was a regular character in the final season. But the loosey-goosey nature of the special meant that, for the first time ever, the catchy opening title sequence included all four of Rashida Jones, Rob Lowe, Retta, and Jim O'Heir.

The original "Parks" finale — which featured flash-forwards detailing the ultimate fates of Leslie and all her friends — was so definitive and perfect in tone that Schur had no intention of ever reviving the show in any form. These are extraordinary circumstances, however, which meant not only bringing Leslie, Ben Wyatt, Ron Effing Swanson, and the rest of the gang from Pawnee out of retirement, but violating many of Schur's fundamental beliefs about how television should be crafted. On that press call, he described TV production as "a team sport… It's about groups of people functioning in holistic ways with each other and collaborating and being in the same room at the same time." While "Parks" in its heyday could generate big laughs just by having actors talk to (or dance in front of) the camera, the series was at its best when that remarkable cast got to bounce off of one another (sometimes literally) in the same physical space.

The special obviously didn't allow for any of that. The only actors sheltering in place together are spouses Nick Offerman and Megan Mullally, which allowed her to do a brief (and wonderful) cameo as Ron's evil second ex-wife, Tammy 2. And even she's bound and gagged in the background at the time we see her, limiting their interaction to the point where she might as well be on another Gryzzl call(*). The show's core couples are given quick, in-story reasons for not being in a room together: Leslie is off handling her job with the National Park Service while Ben (Adam Scott) is home with their kids; Andy (Chris Pratt) has been locked in the shed for two days and doesn't want April (Aubrey Plaza) to just let him out; and Ann (Jones) is self-isolating from Chris (Lowe) and their kids in her home, because she's volunteering as an outpatient nurse during the pandemic. There are a few talk-show segments featuring old pals Joan (Mo Collins) and Perd (Jay Jackson), and fake commercials with Jean-Ralphio (Ben Schwartz), Dennis Feinstein (Jason Mantzoukas), and Jeremy Jamm (Jon Glaser), but the bulk of the special is just our old friends talking to one another through their devices.

(*) If you haven't watched the end of Parks in a while, the final season takes place in what was then the futuristic year of 2017, where a tech company called Gryzzl has bought up much of Pawnee. So it feels right that all our heroes are chatting via Gryzzl rather than Zoom or Google or any of our own quarantine staples.

As a result, the special is limited in what it can do comedically. The commercial parodies are funny (particularly a lonely Jean-Ralphio begging people to call him), and there are a few inspired jokes about life at a remove from one another, like the misanthropic Ron explaining that he's been social distancing since he was four, or bumbling Garry (O'Heir) making himself look like a steaming poop emoji because he doesn't know how to turn off his video filters. Mostly, though, Schur and company lean on what we already know about the characters: that Ben can be a hazard to his own emotional well-being if given too much free time to work on his claymation (and wear his Letters to Cleo T-shirt); that Chris is almost superhumanly healthy; that Tom (Aziz Ansari) has an endless supply of terrible business ideas ("lasagna that's also a toilet paper!"); etc.

Even if this weren't such a dark time in the world, TV comedy would be hard to make, simply because of the physical distance. "Saturday Night Live" pulled off one inspiring but not especially funny episode a few weeks back, then improved in its second quarantine show in part by leaning on familiar ideas. (The core joke of "What's Up With That?" — that a talk-show host never pays attention to what his guests are saying — plays identically whether the characters are in the same place or speaking via Zoom.) Anything that can be done to lighten the amount of effort required to turn a joke into a laugh is crucial under these conditions, and the "Parks" team, god bless them, took every shortcut they possibly could — trusting that the nostalgic rush of being in Leslie's company again would plausibly substitute for the more inspired material they could write if they were doing a more traditional reunion special.

And they're right. Humor-wise, the special wouldn't make anyone's top 10, or even top 50, "Parks" episodes list. That's no great sin when we're talking about the best comedy of the last decade, and especially given the conditions under which it was delivered. But I could not have felt more thrilled, or relieved, or just plain comforted, if the special was somehow the second coming of "Flu Season" or "April and Andy's Fancy Party." Even when it aired in a far safer and saner time in American life, "Parks" was always equal parts warm hug and cool hilarity, and the former felt more welcome now. Leslie felt pathologically compelled to do her daily phone-tree call with Ron, Donna (Retta), and the others as much out of a need to be comforted as to issue comfort. Just seeing all those faces on the screen, all easily slipping back into their old roles (even big movie star Pratt, who in no way carries himself like he's now above this goofy character), felt reassuring in exactly the way I needed. A few scenes in the special are just baldly Leslie or Ben reciting talking points about the importance of self-care during a pandemic. But they feel very much of a piece with everything else, because the entire half-hour is really one welcome balm to the soul, and a link back to the much better days of the Before Time.

Like Leslie herself, "Parks" had an uncanny knack for rising to the occasion during its original run, whether it was making its various impromptu weddings seem like the most romantic ceremonies ever captured on film, or plausibly turning Leslie from forgotten small-town bureaucrat into national political powerhouse. The same flair for doing the right thing at the right moment holds true through the special's climax, where Ron assembles all of Leslie's friends onto the same call so they can serenade her with Andy's "5,000 Candles in the Wind," a.k.a. "Bye Bye, Li'l Sebastian." Like much of the special, it's a rehash of something the original show did a lot — non-Pawnee native Ben even complains about the song again (and is again scolded for it by Tom) — yet emotionally, it is exactly what Leslie, her pals, and her fans watching from home need to hear in that moment. That normally stoic characters like Ron are crying as they sing could be read as the actors breaking character at the chance to virtually reunite in such bizarre times, but it's also a callback to their irrational love of the late, great, very small horse to which the song is a tribute. It works on all levels, even as the lyrics remain as dumb and derivative as always. ("And here's the part that hurts the most / Humans cannot ride a ghost!")

The special is fundamentally flawed, yet that moment couldn't be more perfect. It even rewrites the series' final line by Leslie — instead of the inspiring "I'm ready" from the original finale, it's now one last, exasperated "Dammit, Garry!" But that's OK, because the joke leads into a very real and heartfelt plea by Poehler on behalf of Feeding America, followed by Jones encouraging anyone in the audience feeling mental distress to seek help.

Nine times out of 10 — really, 99 out of 100 — TV revivals are a bad idea even under optimal production conditions. Television shows are a product of a particular time in the lives of the characters, the people making them, and the audience. Change that time for any or all of those groups, and something's not quite right, even if everyone can physically interact with one another. This was an exception to the rule, because Leslie Knope has more to offer right now as an emotional-support heroine than she may have even at her funniest moments of the Obama era. Schur is right that this is not the way television should be made, but this choice felt just right for this strangest of occasions. It was, as Leslie said in the original finale (while quoting Theodore Roosevelt), "the chance to work hard at work worth doing, alongside a team of people that we love."

And thank goodness they took that chance.