When you go back to work, there’s no guarantee there will be a job awaiting you 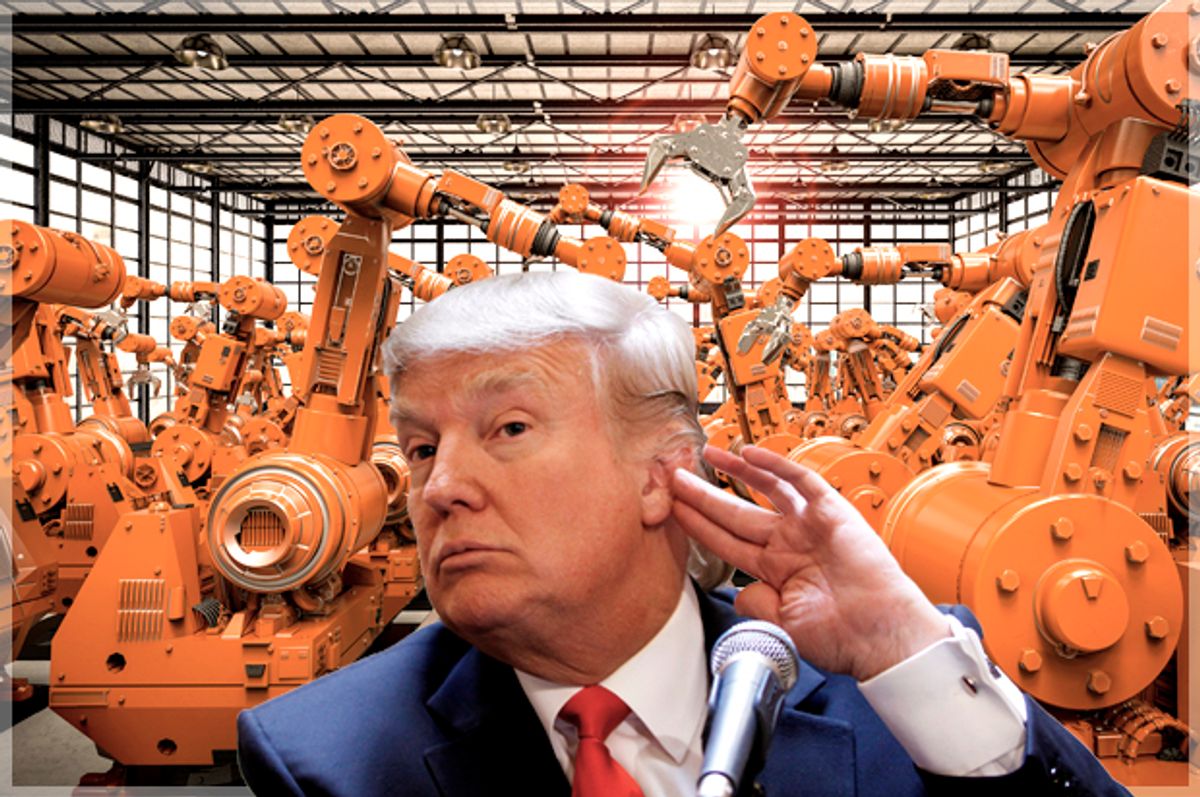 Coronavirus is altering the workplace.

But the changes won't be along the lines of what protesters are seeking — other than the patchwork approach to re-opening businesses shuttered in the name of public safety.

The magical thinking of Trump loyalists and assorted "I-don't-want-rules" folks holding their public tantrums about stay-at-home orders are going to do nothing to make things safe to go to work — or play — again.

Florida, Georgia, South Carolina and Texas are already lifting some restrictions this week, with no guidance about how one maintains social distancing in, say, a nail salon or barbershop or meat-packing plant. Shopowners are on their own.

The openings are coming as another 4.5 million file new unemployment claims, a total of more than 26 million. The actual number of unemployed is well over 30 million.

The early evidence says re-opening without revisions is quite dangerous, as we can see in a growing number of meat-packing plants in the Midwest where isolated cases of contagion are morphing into hundreds of cases virtually overnight.

And it is under the unwatchful eyes of Trump's OSHA, the government workplace safety overseers, who are looking the other way and dumping safety rules.

From a public health viewpoint, it is difficult to see how the chest-thumping for some kind of freedom from common-sense rules is going to keep the infection monster from coming around the corner.

A number of recent articles, commentaries and interviews reflect my thoughts that workplaces introduced to remote operation may well:

One thought that keeps occurring to me is that this pandemic will prompt companies to move a lot faster toward automation, if for no other reason than robots don't contract contagious diseases.

But our stumbling as a society and our seeming inability to devise appropriate, effective and humane policies over the handling of the effects of coronavirus gives me serious pause about how well we will deal with the inevitable widespread rollout of automation.

For sure, those protesting in the streets are not looking more than a foot or two into the future, expecting a return to happier working times rather than the creation of a new normal.

Consider the images we are seeing on television now about truckers having trouble finding disease-free ways to get their own supplies as they labor around the clock to keep store shelves filled. Or the reports that cleaning employees in police stations and hospitals are being infected in record numbers.

One clear answer is that it will occur to companies, particularly to companies who receive government bailout money to restart the stalled U.S. economy, to turn to robots to do these jobs in an effort to speed economic recovery — despite rules that are supposed to incent keeping employees on the payroll. Driverless trucks are already on the proving grounds and are beginning to roll out; a lot of companies have industrial cleaning robots. Some hospitals have been experimenting with robots who deliver bedside drugs and meals.

We have a strange oddity in which disease is getting us to value contributions for those whose income and working conditions we most have ignored.

For good or not, even Donald Trump is saying that the coronavirus is making it easy to see the benefits of more American production of pharmaceuticals and auto parts, the elements of supply lines.

As usual, he is seeing only part of that picture. The virus is also making it easier to see nationwide trucking supply lines that depend on machines rather than humans. Indeed, how difficult is it to project that our profit-hungry companies will accelerate efforts to re-start markets and supply lines?

My concern is that our seeming repeated governmental disregard for workers and benefits will help businesses turn away from employees.  If American society is baffled about how to handle a month or two of lockdown, how are we going to deal with the effects of widespread and permanent unemployment?

The New York Times did a story last week surveying companies that are already moving aggressively toward automation. Industries from recycling to grocery supply companies to fast-food companies, call centers, warehouses and robotics itself are looking to replace humans with machines.

With machines that can be tasked to do specific jobs, like sorting through trash for recyclers, the idea is that employers can devise themselves a disease-free environment for work by machines that do not get sick. Or need health insurance. Or want improvements in working conditions.

Sometimes it is automation replacing cashiers with contactless transactions or more electronic transaction capabilities — even as the risks of hacking and cybercrime are on the rise — or providing translation services.

Some facilities that were looking at getting one or two robots are now saying, 'We need quite a bit more,'" AMP Robotics' Matanya Horowitz told The Times. "It's all moving quite fast."

Other than Andrew Yang, none of the presidential bidders, including Donald Trump, have discussed the permanent widespread displacement of workers or what we should be doing about jobs lost to humans. Yang, of course, made such claims the basis of his primary campaign, calling for monthly basic income payments to all American households exactly to offset the long-term effects of automation.

Employers say that robots augment the work by humans rather than replace them. But, increasingly, coronavirus is making us question that.

When Republicans and Democrats in Washington split along familiar party lines about whether to aid companies first or workers, the strange fragility we suddenly are finding about the nature of work altogether is underscored. We have a government that wants Americans at their jobs so much that we are punishing those who find it necessary to turn to food stamps. We want an economy booming again so much that our government and states are split about whether to risk rekindling a pandemic to make it so.

Yes, in its bumbling way, the government will find ways to open narrow parts of the economy, if for no other reason than to get people off suddenly overwhelmed unemployment rolls. But automation is likely to bend the curve of rehiring workers.

We need a Plan, please, a guide to require that companies expecting to benefit from adding automated production compensate the workers who are displaced.