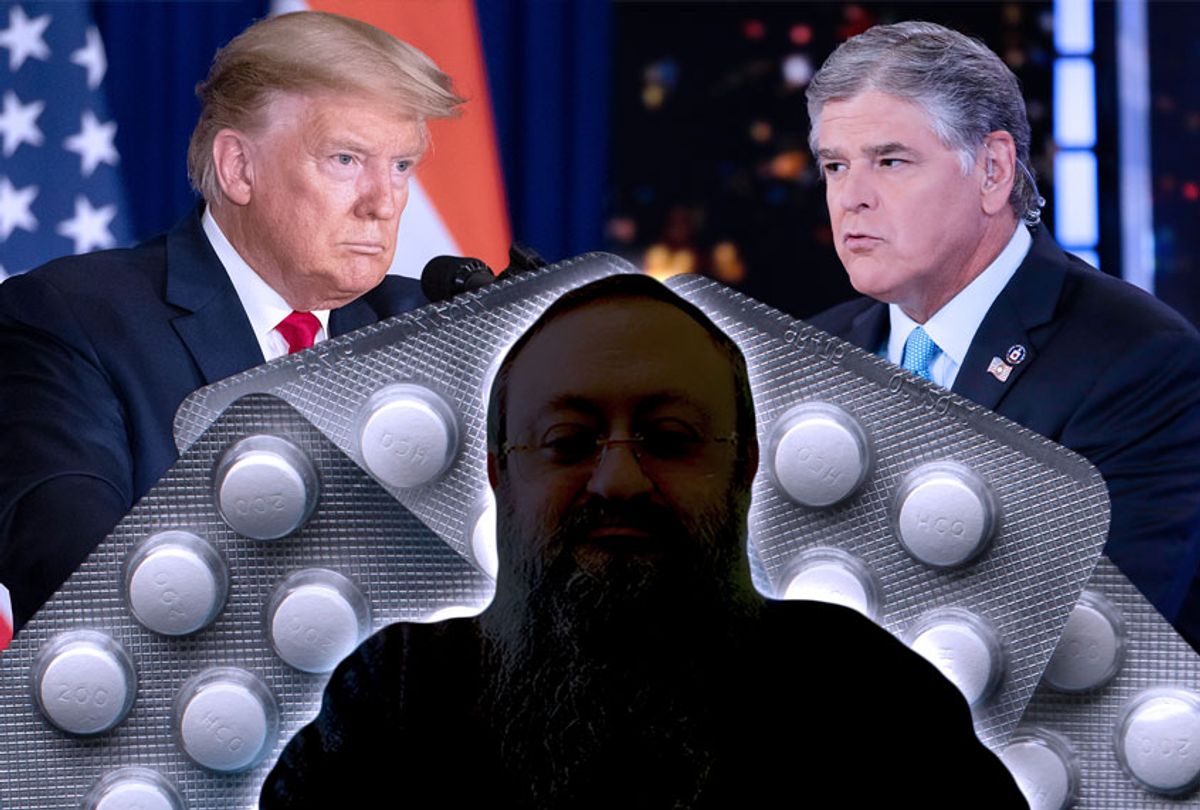 Federal prosecutors are probing the communications of a doctor who has promoted the Trump-touted anti-malaria drug hydroxychloroquine after an associate of the president who was investigated by Robert Mueller accidentally emailed one of the former special counsel's prosecutors, according to The Washington Post.

Prosecutors are looking at the communications of Vladimir "Zav" Zelenko, a doctor promoted by the Fox News host Sean Hannity who has discussed the unproven anti-malarial drug as a potential treatment for the coronavirus with the White House. The probe began when Jerome Corsi, a conspiracy theorist who was close to longtime Trump associate Roger Stone, attempted to email Zelenko but accidentally wrote to former Mueller prosecutor Aaron Zelinsky, according to the report.

Corsi told The Post that Zelinsky responded to the email by contacting his attorney and requesting all of his communications with Zelenko. Corsi, who said he was working with Zelenko on a website that would connect people with doctors, vowed to cooperate with the request.

Zelinsky is currently investigating coronavirus-related crimes in Maryland as part of Attorney General William Barr's efforts to respond to fraudsters and price-gougers taking advantage of the health crisis. Gregory Rigano, an attorney working with Zelenko, told The Post that they have not had any contact with authorities nor were they aware of any scrutiny.

"It's not something I'm familiar with," Rigano said. "We're just saving people's lives that have coronavirus and getting rid of this virus from America as soon as possible."

Corsi in a YouTube video showed the email he accidentally sent, which claimed that Zelenko had "an FDA approved randomized test of HCQ underway," a reference to hydroxychloroquine.

Though Trump and some Fox News hosts and guests have promoted the drug, a study in New York and a study at veterans hospitals did not find any evidence suggesting that the drug was effective at treating coronavirus patients. The Food and Drug Administration warned of "serious heart rhythm problems" related to the drug last week.

Corsi said Zelinsky did not find any approved clinical trials related to Zelenko. After learning about Zelinsky's interest, Corsi said the doctor suggested the trial might have been approved by an internal hospital panel — and not the FDA.

"I pointed out to Zelenko, 'But it's not registered as an FDA test, and you can't say it is,'" Corsi said in the video.

Corsi said that he did "nothing wrong" and that "Zelenko made a mistake."

"He's got no case," he said, referring to Zelinsky. "And we're following all the rules."

Corsi, who was investigated by Mueller's team over his communications related to WikiLeaks though not charged, said on his podcast that he believed Zelinsky's interest in the matter was an example of the government "demonizing" the drug.

"I'm very concerned about the government intrusion here on our freedoms," he said. "I see the government demonizing a medicine . . . this hydroxychloroquine that's been around for 70 years and is fully FDA approved for various illness."

Zelenko has discussed the drug with White House chief of staff Mark Meadows and other officials, according to The Post, and regularly speaks to Trump's personal attorney Rudy Giuliani.

"He's a very smart doctor," Giuliani told the outlet. "I've seen an analysis of Dr. Zelenko's patient list. There are thousands of people who have been helped by it."

Zelenko appeared Sunday on Corsi's podcast, where he lashed out at Dr. Anthony Fauci, the top infectious disease expert in the country, for urging caution with hydroxychloroquine.

"History will prove me right," Zelenko said. "The difference between me and Dr. Fauci is only about 100,000 dead people."

Fauci, the director of the National Institute of Allergy and Infectious Diseases, tried to pump the brakes on the hype around the drug in an interview with Fox News last month.

"We still need to do the definitive studies to determine whether any intervention — not just this one — is truly safe and effective," Fauci said at the time. "But when you don't have that information, it's understandable why people might want to take something anyway even with the slightest hint of being effective."

Corsi is best known for pushing the Obama birther conspiracy theory, which The Post noted was "a topic over which he bonded with Trump before the celebrity mogul ran for president."