Why are small farms immune to safety investigations, even when a worker dies? 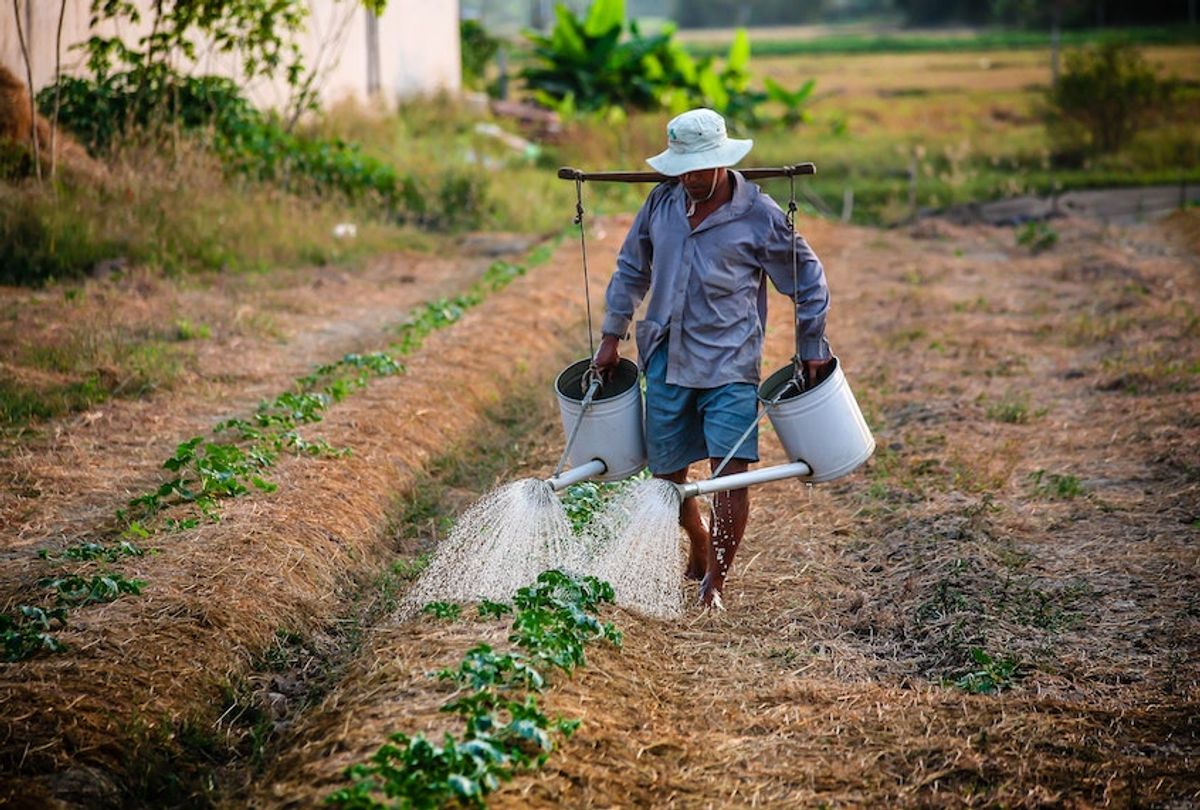 The prices farmers receive for crops do not cover all the costs of keeping farms viable, not to mention the extra costs of ecological or regenerative farming systems. The farm crisis is not over. (Pixabay/Pexels)
--

Michele Gran used to warn her sons to be careful in the world. Then her worst nightmare came true.

Last Aug. 14, Gran's 18-year old son Landon was cleaning out a grain bin for a farmer in Saint Peter, Minnesota, when he was caught in the sweep auger—a long metal screw that pushes grain out of the bin.

Landon died alone. His employer, Richard Gaalswyk, was away making a delivery, according to a sheriff's report. A deputy who took photos of the scene wrote that the auger blade had mutilated and removed Landon's legs up to the knees. Blue fuzzy material—the remains of his jeans—lay scattered across the bin floor. Near the body officers found Landon's headphones still playing music. FairWarning could not reach Gaalswyk for comment.

Shortly after the accident, Michele Gran called the Occupational Safety and Health Administration, the agency responsible for worker safety, hoping to get some answers about what happened.

"I said, 'you need to get down there, my son was killed down there and it was a preventable death. This guy left my son alone.'"

But the federal agency and its state counterpart, Minnesota OSHA, couldn't investigate because Landon, like hundreds of others before him, had been killed on a small farm.

In 1976, a few years after OSHA was created, Congress attached a rider to the agency's budget that exempted farms with 10 or fewer employees from enforcement. Lawmakers and the agricultural industry have made sure the rider is included every year, touting it as a shield protecting America's heartland from onerous government oversight.

As FairWarning has reported, for nearly 45 years the rider has also shielded farm owners from accountability when their workers die in preventable accidents. In the past year, the toll of uninvestigated deaths continued to rise. In Mulvane, Kansas, 39-year old Tim Hunt died after getting trapped in a trailer full of grain. In Maine, a teenager named Roy Varney was killed after he accidentally drove a skid steer into a manure pit on his family's farm. In Knox County, Ohio, 16-year old Ashtan Russell was run over by heavy machinery while working at a chicken farm . There is no way to tally how many non-fatal injuries and safety complaints also went uninvestigated.

For some grieving loved ones, OSHA investigations can provide a measure of justice and answers that can't be found elsewhere.

"I think this is absolutely insane how they will not come out to a farm when there's a death," Gran said. "I think that's absolutely nuts. Every death should be investigated."

At least one member of Congress appears to agree. Last year, Rep. Rosa DeLauro (D-Connecticut), who chairs the House labor appropriations subcommittee, tried but failed to remove the rider from OSHA's budget.

"Data from the Bureau of Labor Statistics shows fatality rates in agriculture are among the highest of any sector," DeLauro told FairWarning in an email. "That is clearly a problem, and it is why I fought to remove this rider."

DeLauro also said that the small farm exemption disproportionately affects "racial and ethnic minorities, as 76% of all farmworkers identify as Latino or Hispanic," DeLauro said.

Throughout its existence, Congress has treated the rider as a third-rail issue, and the handful of attempts to change it have all failed.

In 1999, Sen. Jack Reed (D-Rhode Island) proposed an amendment to give OSHA permission to investigate deaths on small farms if the victims were children. Reed emphasized that the agency would be restricted to determining the cause of the accident, with no power to impose penalties. Recognizing that the amendment had no chance, Reed withdrew it before a vote.

In 2013, the Obama administration cited a small Nebraska farm for safety violations on grounds that the exemption didn't cover post-harvest activities, such as grain processing. The move drew withering criticism from farm state senators and the powerful American Farm Bureau Federation, and OSHA backed off.

DeLauro's attempt to eliminate the rider failed last December, after it was reinserted in the final version of the appropriations bill, which President Trump signed in December.

"The rider leaves all workers on small farms with no safety rights at all," said Debbie Berkowitz, director of the worker safety and health program at the nonprofit National Employment Law Project, in an email. "OSHA is not able to do even the most basic of preventative work—investigate fatalities so we can find the cause and make sure precautions are put in place to prevent another tragedy from occurring."

Iris Figueroa, a staff attorney with the advocacy group Farmworker Justice, said removing the rider would have potentially created a powerful incentive for small farm owners to protect their workers.

"We know, unfortunately, that the way human nature works is if there isn't somebody monitoring and enforcing a rule, the likelihood that it's going to be complied with is just lower—that's the reality," Figueroa said.

In a recent report on confined space accidents on farms, William Field, a professor at Purdue University, noted that there is no centralized public record of agricultural injuries and fatalities because there is no mandatory system for reporting them.

Field said that in his state, Indiana, there are about 60,000 farms.  "How would we regulate? How much of an army would you need [to enforce regulations]? How much money would it take?" he asked. Giving farmers tax breaks and financial incentives would be more effective ways to improve conditions on smaller farms, Field said.

Not every family touched by a farm death wants OSHA's involvement. Anita Wallace Howard lost her 18-year old son Colten in a grain bin accident in Indiana last year. OSHA did not investigate the accident because of the exemption, according to agency records. In a Facebook message, Howard said she and her husband don't blame Colten's employer for his death.

Many farmers and industry groups tout education as the best way to improve safety. Kevin Paap, president of the Minnesota Farm Bureau Federation, said his organization has conducted farm safety camps in the past year that have reached thousands of students and hundreds of adults. He added that the Bureau is generally supportive of voluntary safety guidelines.

"We're not supportive of increased state regulation of farms," Papp said. Asked about Landon Gran's death, Paap said "whether OSHA was involved or not, that quite frankly wouldn't have made a difference in this particular fatality."

OSHA maintains guidelines for workers in grain bins, including that they should always be accompanied by an observer. Under the guidelines, sweep augers must be equipped with a guard that prevents contact with the dangerous part of the machinery.

In the past, federal OSHA has imposed fines for accidents involving workers left alone in grain bins that are not on small farms. In December 2018, a sweep auger fatally lacerated an employee at a dairy in Clearwater, Nebraska, and OSHA cited the employer for six serious safety violations, including failing to station an employee as an observer.

Gran is tormented by thoughts of her son's final moments.

"He would have finally said his goodbyes or something over the sound of the sweep auger going in an empty bin. There's no way somebody could have heard his cries," Gran said. "How painful and alone that child had to feel—it kills me."

Gran shared Landon's story at a legislative hearing in February. Nancy Leppink, the commissioner of Minnesota's Department of Labor & Industry, which includes Minnesota OSHA, teared up as she spoke at the same hearing.

"There is a role for my agency to play," Leppink told legislators. "I see every serious injury and fatality that occurs in this state—comes to my email inbox, every single day. To me, that's a failure of my agency, because all of these accidents are preventable." She added that her department would like to do whatever it can to partner in the campaign to improve farm safety. Leppink declined an interview request and did not respond to written questions.

Urged on by Michele Gran, Minnesota lawmakers have backed legislation that would provide funds for farm safety grants and education.

Gran, who calls herself a "momma on a mission," said she's faced some backlash from farmers who fear that greater OSHA enforcement will harm their businesses, but that hasn't dissuaded her.

"I'm not trying to ruin a small farm by getting government involved," Gran said. "What I'm trying to do is save your life, your child's life, save your dad's life. That's my goal here."