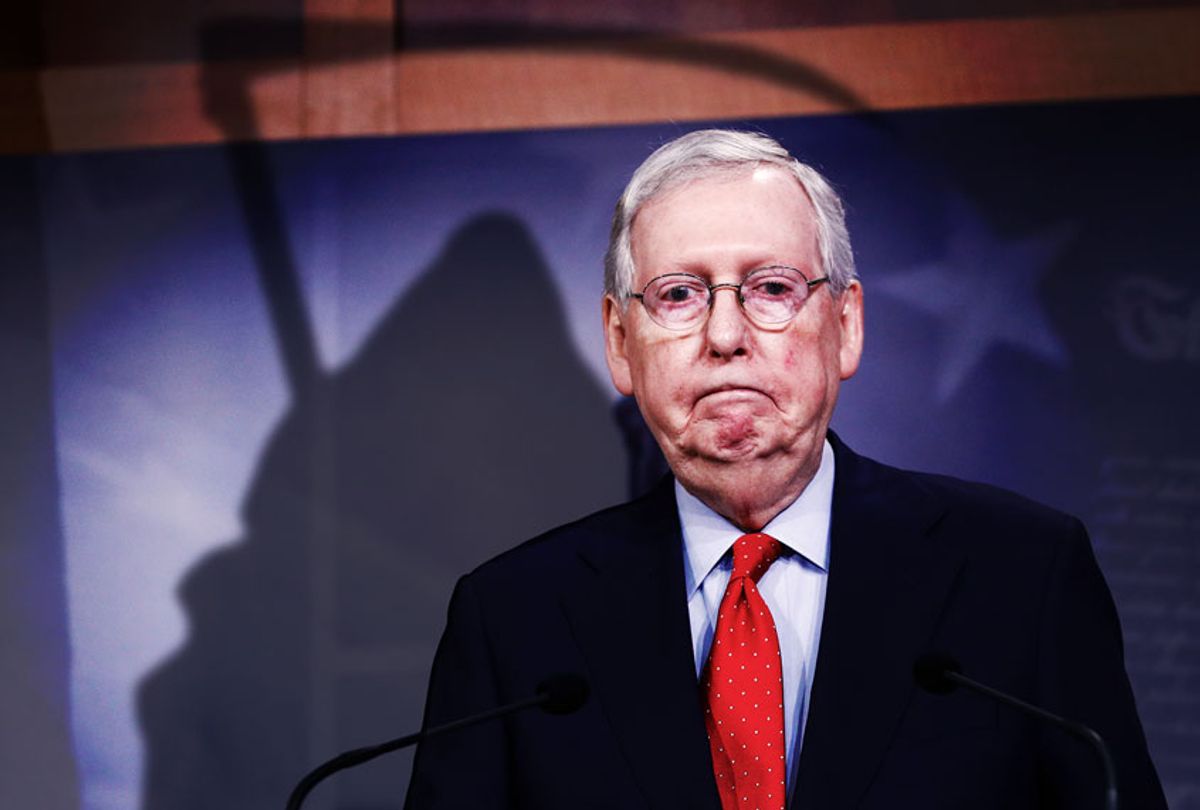 Mitch McConnell, with the shadow of a grim reaper (Photo illustration by Salon/Getty Images/AP Photo)
--

A federal judge called for an investigation into the role of Senate Majority Leader Mitch McConnell, R-Ky., in creating a vacancy on a federal appeals court after a watchdog group accused him of pressuring the previous judge to retire.

The progressive watchdog group Demand Justice asked for a postponement of the Senate Judiciary Committee's hearing on the nomination of Louisville Judge Justin Walker, a McConnell protege, to the U.S. Court of Appeals for the D.C. Circuit. The group alleged that McConnell pressured Judge Thomas Griffith to retire in March so another judge could replace him.

Chief Judge Sri Srinivasan, who was appointed by former President Barack Obama, asked Supreme Court Chief Justice John Roberts on Friday to assign a court panel to investigate the complaint, according to The New York Times.

"The organization's request for an inquiry concerns the decision of a judge of this court to retire from service and the resulting creation of a vacancy on this court, which would be filled by a future colleague on this court," he said, calling for a "review and disposition" of the complaint by another court.

Srinivasan added that he issued the ruling without "any inquiry by this court into the statements contained in the unverified correspondence or the questions posited by the organization in the correspondence about the possibility of judicial misconduct."

The complaint came after The New York Times reported in March that McConnell "has been personally reaching out to judges to sound them out on their plans and assure them that they would have a worthy successor if they gave up their seats soon."

Sen. Chuck Grassley, the former chairman of the Senate Judiciary Committee, has publicly urged conservative judges to quit as soon as possible so the Republican-led Senate can confirm their replacements.

McConnell's efforts suggest that Republicans are trying to fill as many seats as possible in case President Donald Trump loses the election. Republicans have already approved 193 federal judges appointed by Trump after McConnell vowed his desire to "leave no vacancies behind."

"The coordinated manner of Majority Leader McConnell's involvement in the judges' decision-making is quite unprecedented and raises significant ethical questions for the judges who heed his advice," the group told the court, calling for a "thorough inquiry into the judge's announcement and scheduled retirement, including when and how the decision to retire was made and with whose input, is crucial."

McConnell's office refused to say whether he was involved in Walker's nomination. The Republican leader has known Walker since he was in high school and brought him to the Oval Office to meet Trump. He has repeatedly pushed for Walker's nomination, even though he served just six months as a federal judge in Kentucky and was rated unqualified by the American Bar Association.

The courts have no jurisdiction over the Senate leader, so any ethics review would focus on Griffith and why he decided to retire.

"The judiciary is right to take seriously allegations that sitting judges are gaming their retirements at the request of politicians," he told The Times. "Mitch McConnell has been clear that his top priority is packing the courts with the judges his right-wing donors want and that he's actively pushing judges to retire. A judge would undermine the credibility of the bench by participating in that partisan gamesmanship."

Brian Fallon, the executive director of Demand Justice, called for the Judiciary Committee to postpone Walker's hearing, which is scheduled for Wednesday, "until we know the truth about what ethical lines Mitch McConnell crossed to get Walker this seat."

"At the very least," he told the outlet, "McConnell should come clean about whether and when he contacted Judge Thomas Griffith prior to his sudden retirement."

Fallon accused McConnell of trying to pack the courts when news of his pressure was first reported in March.

"If Mitch McConnell is having direct conversations to pressure sitting federal judges to basically retire so Trump can name more picks, it is court-packing in a different form," he told The Times. "It raises the question of what, if anything, McConnell is offering them to take senior status earlier than planned. This type of hand-in-glove coordination shows how utterly politicized the judicial branch is."