New federal guidelines may make it harder to report sexual assault or harassment, and reduce investigations 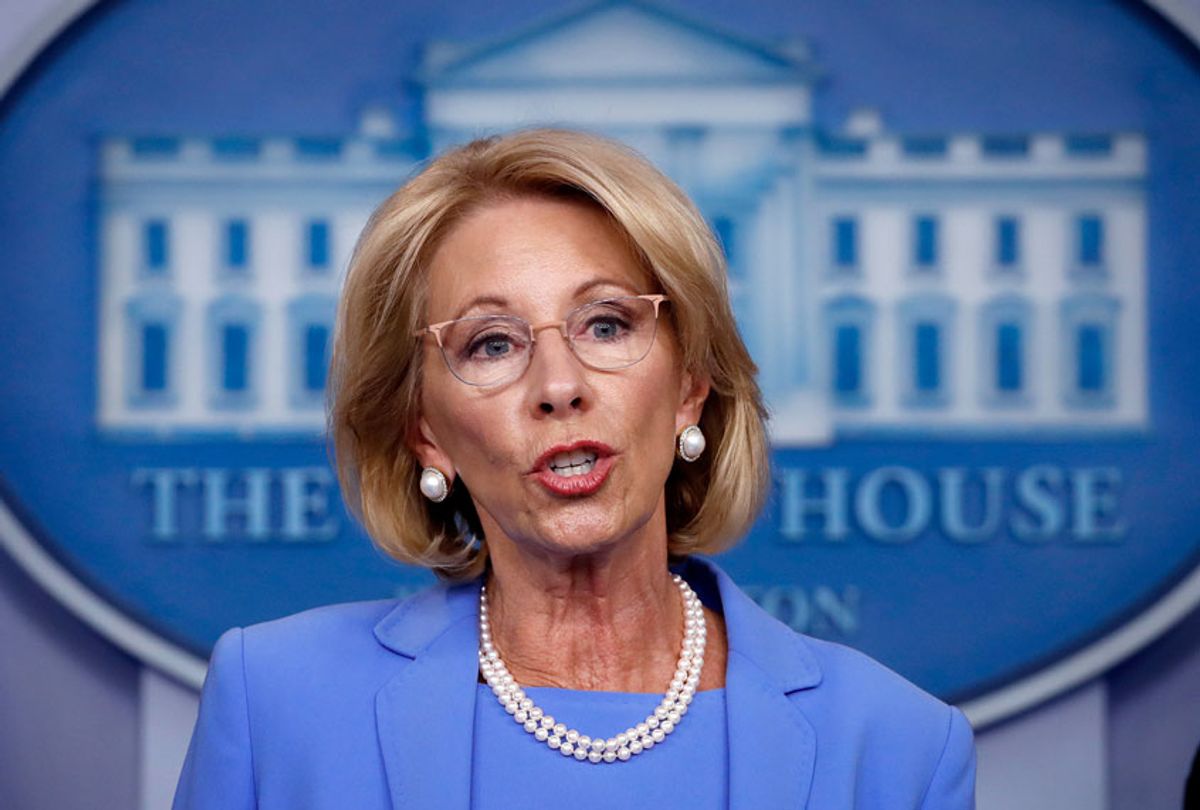 After three years of combative deliberations, Education Secretary Betsy DeVos released controversial new rules on Wednesday governing how schools administer allegations of sexual assault and misconduct, rules that the department, by its own admission, designed in part to suppress accusations nationwide.

The Title IX overhaul mandates that schools adopt a formal and open disciplinary process that resembles a criminal trial — including cross-examination in open hearings — and affords new protections for students accused of assault or misconduct, including a presumption of innocence and the right to review any and all evidence against them.

The guidance goes into effect in August.

Legal experts and victims' rights advocates decry the new rules, arguing they will have a chilling effect on complaints. The department effectively agrees: In what seems an instance of saying the quiet part out loud, DOE admits that the changes could reduce the number of investigations, thereby saving schools millions of dollars.

Republicans characterize the changes as enhancing victims' rights. Sen. Lamar Alexander, R-Tenn., chair of the Senate Committee on Health, Education, Labor, and Pensions, said in a statement that the revision "respects and supports victims and preserves due process rights for both the victim and the accused."

Alexander also said that thanks to the new rule, "schools will more fully understand their roles and responsibilities to better comply with the law."

His Democratic counterpart, Sen. Patty Murray of Washington, took a different view, tweeting that the guidance is a "devastating blow."

"@BetsyDeVosED's Title IX rule is not about 'restoring balance,' it's about silencing survivors. It will make it harder for students to report an incident of sexual assault or harassment — and that much easier for a school to sweep it under the rug," she wrote.

In March, Murray, along with Democratic Sens. Kirsten Gillibrand of New York and Elizabeth Warren of Massachusetts, asked DeVos to put off the overhaul, calling it "reckless and inappropriate" to force schools to confront new rules while trying to manage fallout from the coronavirus pandemic. Eighteen state attorneys general told the secretary that they shared those concerns.

The chief criticism is that the new guidance raises the standards for accusations across the board and imposes unjust requirements on victims.

For instance, victims will now have to face their attackers in a situation similar to open court, and schools will effectively be forced to raise evidentiary standards from a "preponderance of the evidence" to "clear and convincing evidence."

The rule "requires schools to select one of two standards of evidence, the preponderance of the evidence standard or the clear and convincing evidence standard — and to apply the selected standard evenly to proceedings for all students and employees, including faculty," according to a DOE press release.

This change was inserted with the broadly understood knowledge that most schools will not choose to lower the "clear and convincing" bar already in place for resolving other types of campus disputes, because faculty and staff generally favor the highest possible standards for those allegations.

DeVos also effectively removed the Bush and Obama administrations' non-compulsory "soft ban" on mediation in cases of alleged sexual violence. Administrators would once again be allowed to pressure accusers into the mediation process, which critics say minimizes their experience and requires victims to face and forgive their attackers.

Schools often prefer the mediation process, which is less time-consuming and does not require the same level of resources demanded by a full investigation. Mediation results are confidential, rather than public.

This rule also raises the bar for what constitutes harassment — it now must be an incident that denies access to education. At the same time, it narrows the definition of sexual harassment from "unwelcome conduct of a sexual nature" to the Supreme Court's much more attenuated language: "unwelcome conduct on the basis of sex that is so severe, pervasive and objectively offensive that it denies a person access to the school's education program or activity."

Victim advocacy group Know Your Title IX said those overhauls will "force students to endure repeated and escalating levels of abuse without being able to ask their schools for help."

The rule also reduces a school's investigative responsibilities to on-campus incidents only and lifts the 60-day timeline for campus investigations, opening up the option to delay the adjudication process, perhaps indefinitely.

Schools that don't comply with the new rules could lose federal funding.

The guidance seems at odds with Title IX-related legislation passed by Texas lawmakers earlier this year, the first in the nation to implement criminal liability for failure to "properly" report sexual misconduct involving a student to an appropriate Title IX coordinator.

This law was interpreted in opposite ways by different parties, so it passed with full bipartisan support. Victim advocates had lobbied for compulsory reporting, which backfired: Now, anyone employed by a college or university in Texas — all faculty and staff, including graduate assistants — must report all claims or knowledge they have of an incident or potentially be held criminally liable for negligence, punishable by up to a year in jail.

This also applies, however, to accounts a student offers in confidence, which could have a chilling effect on reports: Not only will the accusation get kicked up the chain, but students won't be guaranteed any rights of privacy or anonymity. This might result in a short-term spike in accusations, but advocates believe that over time, fears about personal privacy and confidentiality are likely to reverse that trend.