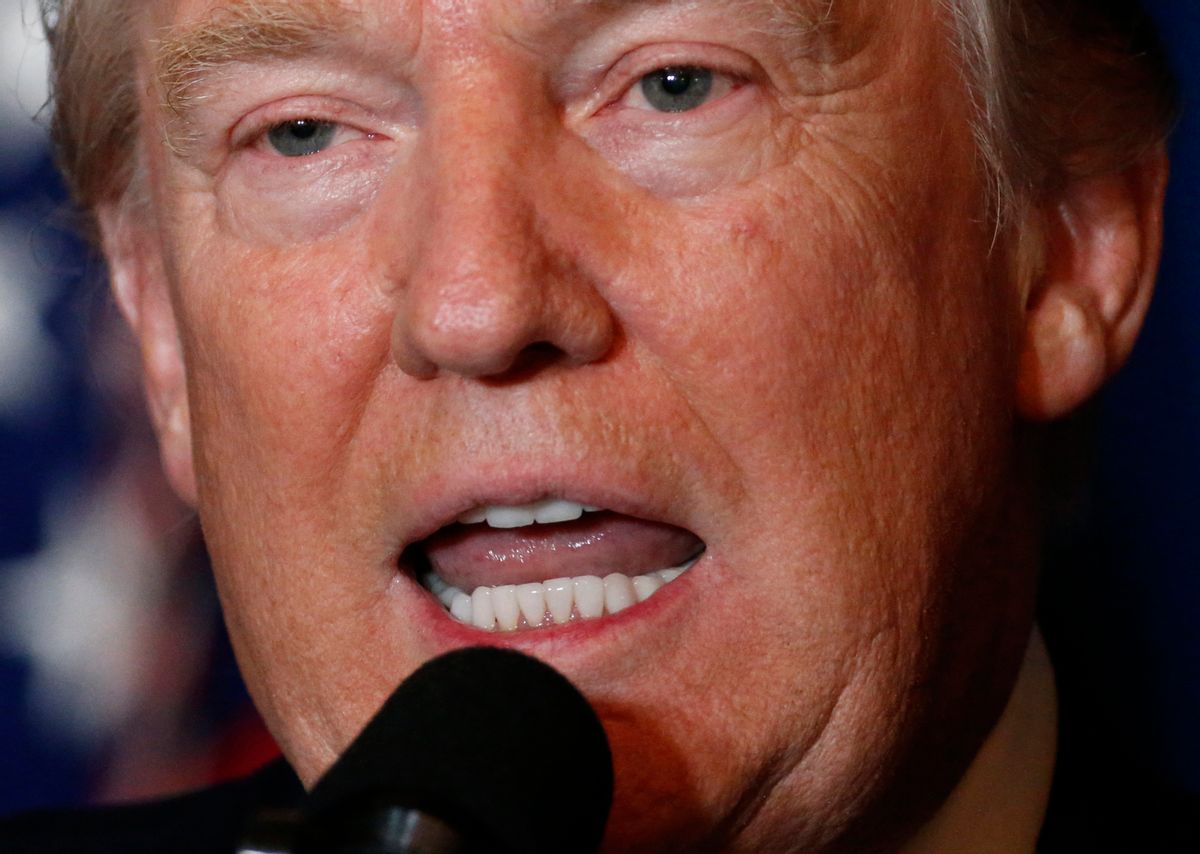 In this April 6, 2017, photo, President Donald Trump speaks at Mar-a-Lago in Palm Beach, Fla., after the U.S. fired a barrage of cruise missiles into Syria in retaliation for this week's gruesome chemical weapons attack against civilians. Before the U.S. attack on a Syrian air base, Trump accused his predecessor of doing nothing when Syria’s government used chemical weapons against its population in 2013. He’s right that President Barack Obama issued what amounted to an empty threat of military action. The circumstances, though, were more complicated than Trump described. (AP Photo/Alex Brandon) (AP)
--

As of press time, the clock's count was 43,814. Below large red numbers representing the "estimated portion U.S. Covid-19 deaths due to POTUS inaction" is an explanation:

In January 2020, the Trump administration was advised that immediate action was required to stop the spread of Covid-19. According to NIAID Director Dr. Anthony Fauci, "there was a lot of pushback" to this advice. President Trump declined to act until March 16th. Epidemiologists now estimate that, had mitigation measures been implemented one week earlier, 60% of American Covid-19 deaths would have been avoided.

In an op-ed published by the Washington Post, Jarecki further explained the motivation for the death clock, how the figure displayed at the top of the website is calculated, and his hope that the project will help spark demands for "more responsive and responsible leadership" amidst this global crisis.

"This pandemic is ongoing, and the lives already unnecessarily lost demand we seek more responsible crisis leadership," Jarecki wrote. "Just as the names of fallen soldiers are etched on memorials to remind us of the cost of war, quantifying the lives lost to the president's delayed coronavirus response would serve a vital public function."

"To let the numbers speak for themselves, my team and I have constructed an online counter at TrumpDeathClock.com, estimating the toll of the White House's delayed response," he added. "The site displays both the number of people who have died in the country from Covid-19 and an estimate of that portion whose lives would have been saved had the president and his administration acted just one week earlier."

The clock launch came on the heels of Trump making clear in a Tuesday night interview with ABC News that he is willing to sacrifice lives of people across the United States to ease restrictions on movement and reopen U.S. businesses. During the televised appearance, Trump said that "there'll be more death."

"This suffering cannot be forgotten," Jarecki wrote at the Post. "As of today, tens of thousands of Americans have lost their lives as a consequence of the administration's failure to act sooner, so it's no wonder the president excoriates reporters who ask him why he waited so long to implement the guidelines."

"Trump's fallback when he is under scrutiny is to deflect, attack, and distract," he continued. "But will this work when his decisions have led to a loss of American lives? How will the president be held responsible?"

Jarecki concluded his opinion piece by suggesting that displaying his clock on billboards and buildings would be a "powerful statement" to honor those who have died from the infectious disease and demand better leadership from the administration. According to the Guardian, which reported on the project Wednesday:

Jarecki is already thinking about giving physical form to his Trump Death Clock following the example of the National Debt Clock. He told the Guardian that as he was developing his idea, associates encouraged him to create an actual physical tracker that might be placed in full public view in New York and other large cities across the country.

The newspaper noted that Jarecki's formula, based on an April op-ed that a pair of prominent epidemiologists published in the New York Times, "runs the risk of coming across as reductionist and motivated by political animus. But Jarecki, whose previous work in movies has focused on abuses in public life, insists that his clock is founded upon the credible scientific thinking of top public health experts and epidemiologists, and that it is conservative in its estimations."

As for any potential fallout from publicly accusing Trump of having a hand in the deaths of tens of thousands of Americans, Jarecki told the Guardian that it was not his focus.

"I can't think about that," he said. "I feel I owe it to people who lost their lives to demand accountability and more responsible leadership going forward so that they did not die in vain."

The project also followed reporting Tuesday that the White House Coronavirus Task Force chaired by Vice President Mike Pence is winding down and expected to conclude operations by June 1, despite the revelation Monday of an internal government document showing the U.S. daily death toll from Covid-19 could double by that same day. On Wednesday, following widespread criticism, Trump reversed what Pence had indicated and said the task force would remain in place "indefinitely."