Trump's war on birth control: Always insulting and sexist; even worse during a pandemic

The world is falling apart, but the Trump administration wants women to clear pointless obstacles for contraception 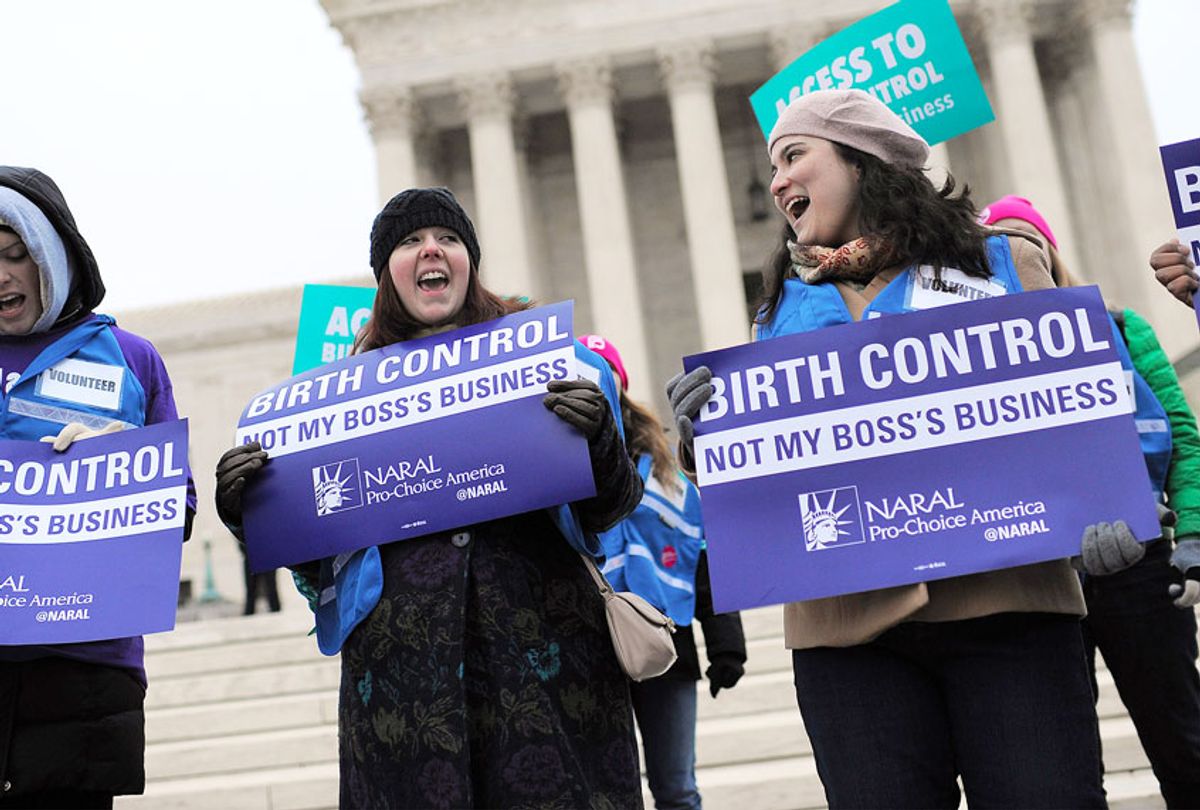 A demonstration outside the Supreme Court during a 2014 hearing on the contraceptive mandate. (Matt McClain/ The Washington Post via Getty Images)
--

Getting my birth control during the pandemic was not exactly easy. I had my annual exam scheduled for April 15, but it was canceled with a phone call. I managed to get a request in for my prescription renewal before the harried nurse got me off the phone, but she was too overwhelmed to deal with the mail-in pharmacy I usually use. So I put on my mask and stood in line at the local pharmacy for half an hour to get three little pill packets that will last until August.

I'm one of the lucky ones. My employer, Salon, doesn't contest the federal law requiring that health insurance plans cover contraception. Unlike some women, I don't have to endure the indignity of not getting my birth control because my boss thinks that women aren't responsible enough to be trusted with the power to decide whether to have sex, or whether to get pregnant.

On Wednesday, the Supreme Court — one more time! — heard arguments over a provision in the Affordable Care Act that classifies birth control as preventive care, which means health care plans must cover it without a copay. Since the rule was first written, it's been a flashpoint for conservative anger about both women's rights and Obamacare. No other form of preventive care — vaccines, cancer screenings, breastfeeding services — has been subject to so much litigation or public debate.

Trump vs. Pennsylvania is the third time the court has heard arguments over the rule. This time, the battle was over a Trump-era rewritten rule that grants employers the right to block employees from using their earned health care benefits to pay for contraception, if the employer claims to have a "moral" objection.

In response to this case, talk radio host Neal Boortz went on Twitter and gave the world an example of what these "moral objections" look like.

"Duct tape your legs together until you figure what the hell is going on down there and change your behavior," Boortz instructed women who want contraceptives to be covered by their health plans like any other prescription drug.

When I asked Boortz if he personally subscribed to this prescription for lifelong celibacy, he deflected, sneering that he just wants women to "take responsibility for their actions ... and to not demand others pay for their lack of diligence."

Ah yes, the stereotype of the dumb slut. Of course, conservative lawyers before the court carefully avoid the words "dumb" or "slut" when arguing that we shouldn't treating birth control exactly as we treat any other prescription medication. Still, the fear that convenient contraception frees women up to be promiscuous and lazy is always the argument undergirding whatever high-minded language about faith and morality gets rolled out on these occasions.

We saw this when birth control was first included in the prevention coverage rules in 2012, when radio talk show host Rush Limbaugh declared that feminist activist Sandra Fluke was a "slut" and a "prostitute" because she felt that the insurance plan she paid for should cover her contraceptive services.

Similarly, Sen. Ron Johnson, R-Wis., blithely told a reporter in 2012 that any woman whose employer blocks her from using her plan to buy contraception should simply type, "What if I can't afford birth control?" into Google. "Bam" — it's "easy to get," said the gentleman from the Badger State.

As reproductive rights journalists diligently proved, it was not in fact easy, or particularly affordable, to get birth control this way. Even setting that aside, Johnson's words were offensive because their clear implication was that it's totally fine to make contraception harder to get than other prescription services, and any woman who objects must be a dumbass.

This notion that women should have to clear a bunch of unnecessary obstacles to prove themselves worthy of contraception was embedded in the arguments made by Solicitor General Noel Francisco, who spoke before the Supreme Court in favor of the Trump rule that allows employers to block contraception access for any reason they desire.

When Justice Sonia Sotomayor noted that an estimated 75,000 to 125,000 women might see their contraception prescriptions denied by nosy, judgmental employers (that's my paraphrase; she didn't say that), Francisco responded that this was no a big deal because "access to contraception is widely available in this country for many other means" before Sotomayor interrupted him.

Needless to say, these "other means" that Francisco was talking about are also being chipped away by the Trump administration, which has waged an all-out war on contraception access. This administration has been trying to gut Title X, a program that makes contraception affordable for women who don't have health care plans that cover it. It's also trying to destroy Planned Parenthood, the most popular avenue for providing women "other means" to get contraception.

But when feminists object to conservatives continuing to throw up more and more obstacles to contraception, they always get a variation of Francisco's response: Find another way. Apparently the belief is that women have a special obligation to prove themselves sufficiently "responsible" by running through some obstacle course in order to obtain the means to have sex without pregnancy.

Meanwhile, there's little doubt that the conservative men who taunt feminists about this feel no compunction about having sex without any bureaucratic red tape. Indeed, they largely expect women to take care of that for them.

This battle was stupid even in better times. As the Guttmacher Institute has shown, 99% of women who have sex with men have used contraception at some point, and about 60% of women of reproductive age are using contraception at any point in time. Contraception is normal health care, not some esoteric luxury good only available to those with the time and means to navigate an opaque procurement system.

Nor is the expectation of lifelong celibacy realistic — especially since those who impose it clearly don't expect men to be celibate. Sex is a near-universal behavior — a 2006 study shows 99% of Americans have had sex by the age of 44, and that number has likely only gone up since then.

But the absurdity of this debate is only heightened by the pandemic. To be clear, there's nothing wrong with sleeping around. This is purportedly a free country, as conservatives will often tell you. But during quarantine or lockdown, when the only people getting laid are those doing so in partnered relationships, should be a time to remember that the vast majority of contraception-assisted sex is nothing like the pornographic fantasies that fuel right-wing hysterics.

The implication that women should simply suck it up and have babies even when they don't want to, which is cruel in the best of times, is particularly inhumane in a country where unemployment is soaring to 20% or higher, and when going to clinics for prenatal care, much less going to a hospital to give birth, involves walking into a COVID-19 war zone.

Of course, the cruelty is the point. While anti-contraception forces continue to hide behind rhetoric about "faith" and "morality," the Trump administration has laid bare the sadism that's really motivating the anti-choice movement. That's why anti-choicers have embraced a leader who is a thrice-married compulsive adulterer, a confessed sexual assailant and a sexist bully who complains that female reporters aren't more like "Donna Reed."

No matter how many nuns the anti-choice movement throws at us to justify Trump's war on contraception, no one should be confused about what's going on here. The Republican attack on birth control is about making women's lives harder, just to put them in their place. The pandemic is only making that more obvious.