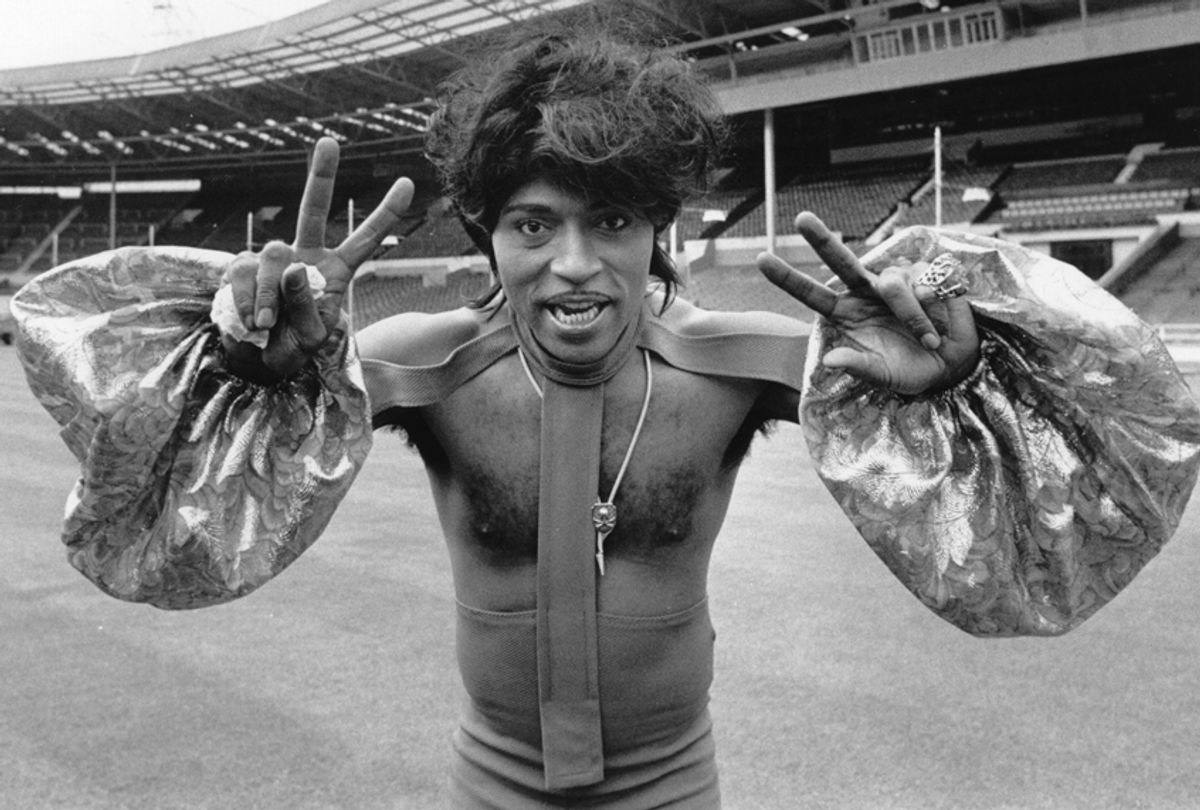 Little Richard, a founding father of rock and roll whose fervent shrieks, flamboyant garb, and joyful, gender-bending persona embodied the spirit and sound of that new art form, died Saturday. He was 87. The musician's son, Danny Penniman, confirmed the pioneer's death to Rolling Stone, but said the cause of death was unknown.

Starting with "Tutti Frutti" in 1956, Little Richard cut a series of unstoppable hits – "Long Tall Sally" and "Rip It Up" that same year, "Lucille" in 1957, and "Good Golly Miss Molly" in 1958 – driven by his simple, pumping piano, gospel-influenced vocal exclamations and sexually charged (often gibberish) lyrics. "I heard Little Richard and Jerry Lee Lewis, and that was it," Elton John told Rolling Stone in 1973. "I didn't ever want to be anything else. I'm more of a Little Richard stylist than a Jerry Lee Lewis, I think. Jerry Lee is a very intricate piano player and very skillful, but Little Richard is more of a pounder."

Although he never hit the top 10 again after 1958, Little Richard's influence was massive. The Beatles recorded several of his songs, including "Long Tall Sally," and Paul McCartney's singing on those tracks – and the Beatles' own "I'm Down" – paid tribute to Little Richard's shredded-throat style. His songs became part of the rock and roll canon, covered over the decades by everyone from the Everly Brothers, the Kinks, and Creedence Clearwater Revival to Elvis Costello and the Scorpions.

Little Richard's stage persona – his pompadours, androgynous makeup and glass-bead shirts – also set the standard for rock and roll showmanship; Prince, to cite one obvious example, owed a sizable debt to the musician. "Prince is the Little Richard of his generation," Richard told Joan Rivers in 1989 before looking at the camera and addressing Prince. "I was wearing purple before you was wearing it!"

Born Richard Wayne Penniman on December 5th, 1932, in Macon, Georgia, he was one of 12 children and grew up around uncles who were preachers. "I was born in the slums. My daddy sold whiskey, bootleg whiskey," he told Rolling Stone in 1970. Although he sang in a nearby church, his father Bud wasn't supportive of his son's music and accused him of being gay, resulting in Penniman leaving home at 13 and moving in with a white family in Macon. But music stayed with him: One of his boyhood friends was Otis Redding, and Penniman heard R&B, blues and country while working at a concession stand at the Macon City Auditorium.

After performing at the Tick Tock Club in Macon and winning a local talent show, Penniman landed his first record deal, with RCA, in 1951. (He became "Little Richard" when he about 15 years old, when the R&B and blues worlds were filled with acts like Little Esther and Little Milton; he had also grown tired with people mispronouncing his last name as "Penny-man.") He learned his distinctive piano style from Esquerita, a South Carolina singer and pianist who also wore his hair in a high black pompadour.

For the next five years, Little Richard's career advanced only fitfully; fairly tame, conventional singles he cut for RCA and other labels didn't chart. "When I first came along, I never heard any rock & roll," he told Rolling Stone in 1990. "When I started singing [rock & roll], I sang it a long time before I presented it to the public because I was afraid they wouldn't like it. I never heard nobody do it, and I was scared."

By 1956, he was washing dishes at the Greyhound bus station in Macon (a job he had first taken a few years earlier after his father was murdered and Little Richard had to support his family). By then, only one track he'd cut, "Little Richard's Boogie," hinted at the musical tornado to come. "I put that little thing in it," he told Rolling Stone in 1970 of the way he tweaked with his gospel roots. "I always did have that thing, but I didn't know what to do with the thing I had."

Read more Rolling Stone: James Taylor Sings 'You Can Close Your Eyes' With His Family at Home

During this low point, he sent a tape with a rough version of a bawdy novelty song called "Tutti Frutti" to Specialty Records in Chicago. He came up with the song's famed chorus — "a wop bob alu bob a wop bam boom" — while bored washing dishes. (He also wrote "Long Tall Sally" and "Good Golly Miss Molly" while working that same job.)

By coincidence, label owner and producer Art Rupe was in search of a lead singer for some tracks he wanted to cut in New Orleans, and Penniman's howling delivery fit the bill. In September 1955, the musician cut a lyrically cleaned-up version of "Tutti Frutti," which became his first hit, peaking at 17 on the pop chart. "'Tutti Frutti really started the races being together," he told Rolling Stone in 1990. "From the git-go, my music was accepted by whites."

Its followup, "Long Tall Sally," hit Number Six, becoming his the highest-placing hit of his career. For just over a year, the musician released one relentless and arresting smash after another. From "Long Tall Sally" to "Slippin' and Slidin,'" Little Richard's hits – a glorious mix of boogie, gospel, and jump blues, produced by Robert "Bumps" Blackwell — sounded like he never stood still. With his trademark pompadour and makeup (which he once said he started wearing so that he would be less "threatening" while playing white clubs), he was instantly on the level of Elvis Presley, Jerry Lee Lewis and other early rock icons, complete with rabid fans and mobbed concerts. "That's what the kids in America were excited about," he told Rolling Stone in 1970. "They don't want the falsehood — they want the truth."

As with Presley, Lewis and other contemporaries, Penniman also was cast in early rock and roll movies like Don't Knock the Rock (1956) and The Girl Can't Help It (1957). In a sign of how segregated the music business and radio were at the time, though, Pat Boone's milquetoast covers of "Tutti Frutti" and "Long Tall Sally," both also released in 1956, charted as well if not higher than Richard's own versions. ("Boone's "Tutti Frutti" hit Number 12, surpassing Little Richard's by nine slots.) Penniman later told Rolling Stone that he made sure to sing "Long Tall Sally" faster than "Tutti Frutti" so that Boone couldn't copy him as much.

But then the hits stopped, by his own choice. After what he interpreted as signs – a plane engine that seemed to be on fire and a dream about the end of the world and his own damnation – Penniman gave up music in 1957 and began attending the Alabama Bible school Oakwood College, where he was eventually ordained a minister. When he finally cut another album, in 1959, the result was a gospel set called God Is Real.

His gospel music career floundering, Little Richard returned to secular rock in 1964. Although none of the albums and singles he cut over the next decade for a variety of labels sold well, he was welcomed back by a new generation of rockers like the Rolling Stones and Bob Dylan (who used to play Little Richard songs on the piano when he was a kid). When Little Richard played the Star-Club in Hamburg in 1964, the opening act was none other than the Beatles. "We used to stand backstage at Hamburg's Star-Club and watch Little Richard play," John Lennon said later. "He used to read from the Bible backstage and just to hear him talk we'd sit around and listen. I still love him and he's one of the greatest."

By the 1970s, Little Richard was making a respectable living on the rock oldies circuit, immortalized in a searing, sweaty performance in the 1973 documentary Let the Good Times Roll. During this time, he also became addicted to marijuana and cocaine while, at the same time, returning to his gospel roots.

Little Richard also dismantled sexual stereotypes in rock & roll, even if he confused many of his fans along the way. During his teen years and into his early rock stardom, his stereotypical flamboyant personality made some speculate about his sexuality, even if he never publicly came out. But that flamboyance didn't derail his career. In the 1984 biography The Life and Times of Little Richard (written with his cooperation), he denounced homosexuality as "contagious … It's not something you're born with." (Eleven years later, he said in an interview with Penthouse that he had been "gay all my life.")

Later in life, he described himself as "omnisexual," attracted to both men and women. But during an interview with the Christian-tied Three Angels Broadcasting Group in 2017, he suddenly denounced gay and trans lifestyles: "God, Jesus, He made men, men, he made women, women, you know? And you've got to live the way God wants you to live. So much unnatural affection. So much of people just doing everything and don't think about God."

Yet none of that seemed to damage his mystique or legend. In the 1980s, he appeared in movies like Down and Out in Beverly Hills and in TV shows like Full House and Miami Vice. In 1986, he was one of the 10 original inductees into the Rock and Roll Hall of Fame, and in 1993, he was awarded a Lifetime Achievement Award at the Grammys. His last known recording was in 2010, when he cut a song for a tribute album to gospel singer Dottie Rambo.

In the years before his death, Little Richard, who was by then based in Nashville, still performed periodically. Onstage, though, the physicality of old was gone: Thanks to hip replacement surgery in 2009, he could only perform sitting down at his piano. But his rock and roll spirit never left him. "I'm sorry I can't do it like it's supposed to be done," he told one audience in 2012. After the audience screamed back in encouragement, he said – with a very Little Richard squeal — "Oh, you gonna make me scream like a white girl!"