Environmentally-conscious shoppers tend to be drawn to such labels, but might not be aware of a critical drawback 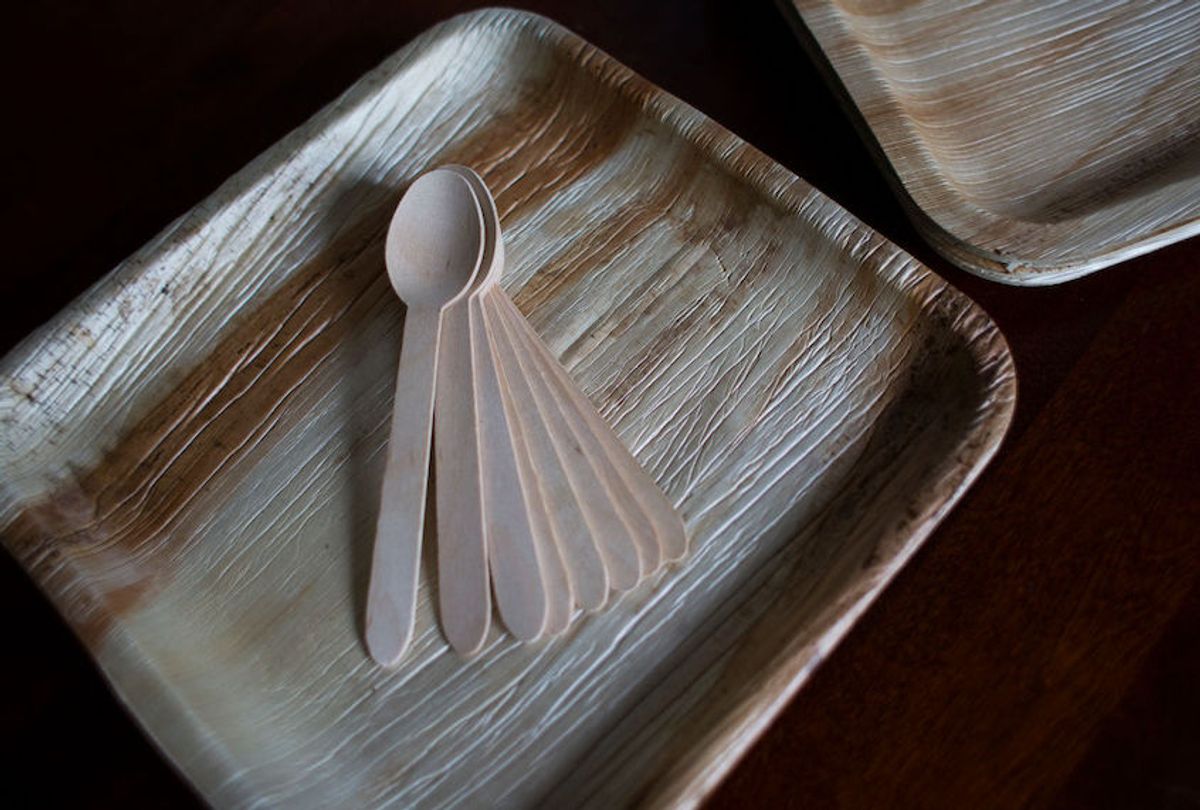 Next to empty shelves where toilet paper used to be is a stretch of aisle stacked with trash bags, disposable cups, and cutlery at a Whole Foods in Seattle. On the front of most of these products — in bold print — is the word "compostable," meaning the product is biodegradable under the right conditions.

Environmentally-conscious shoppers tend to be drawn to such labels. But they might not be aware of a critical drawback: As biodegradable materials break down in a landfill, which is where they usually end up, they can release methane, a potent greenhouse gas with climate warming effects upwards of 30 times that of carbon dioxide.

"There is a lot of branding around biodegradability," Javier Fernandez, a materials scientist at the Singapore University of Technology and Design, told FairWarning. "What is good for the environment? And what is just good for selling more cups?"

Biodegradable products can benefit the environment. If a bag, cup or fork is biodegradable, it is less likely to clog a landfill, end up floating in the ocean — or spewing methane, for that matter — and instead can be turned into a nutrient-rich material that feeds healthy soil. But that depends on the container or bag or fork going to a commercial composting facility. Most areas of the U.S. currently don't have them.

As demand for biodegradable continues to climb — with packaging, takeout containers, even designer jeans and athletic shoes now carrying the designation — experts warn that we might be simply trading one set of environmental problems for another. Bryan Staley, president and CEO of  the Environmental Research and Education Foundation, a North Carolina-based nonprofit that focuses on waste management, recommended that consumers "not allow biodegradable marketing tactics to influence their purchasing decisions."

If that compostable product won't end up in a commercial compost facility, "then there is no reason to favor a material that is compostable," added Morton Barlaz, an environmental engineering professor at North Carolina State University.

In fine print on the package of compostable cups from World Centric, maker of some of the environmentally-friendly products at Whole Foods, is an important caveat: The cups "breakdown in 3-6 months in a commercial composting system." In smaller print below it says: "Appropriate facilities may not exist in your area. Please check with local officials."

A composting center carefully controls moisture, airflow and temperature—all of which affect how well and how fast material biodegrades. Critical to the composting process is keeping oxygen flowing through the piles so that oxygen-consuming microorganisms can break down the material. Otherwise, the process is less efficient and produces climate-warming methane.

Of thousands of U.S. cities, only about 185 collect compost waste at the curb. What's more, many of them focus on food scraps and won't accept biodegradable packaging. Or, if composters do accept that material, they will still frequently screen it out along with other plastics for shipment to a landfill, explained Shakira Hobbs, an engineer at the University of Kentucky.

That leaves the vast majority of Americans with the option of tossing biodegradable items in a home compost pile, a recycling bin or a garbage can. A backyard bin rarely gets hot enough to break down compostable plastic. So, that's out. Recycling is also unlikely to be the answer, as compostable plastics are generally not recyclable. In fact, a compostable item could contaminate other recyclable materials and force an entire batch to be sent to a landfill.

So, today, the most likely destination of many biodegradable products is the landfill.

Down in the dumps

About 30 miles southeast of the Whole Foods is the Cedar Hills Regional Landfill in Maple Valley, Wash. The 920-acre site receives more than 800,000 tons of solid waste a year.

In 2009, a gas-to-energy system was constructed at Cedar Hills to convert some of the methane gas from the landfill into natural gas. It now produces enough each year to meet the natural gas needs of more than 19,000 homes. Some landfills around the country have installed similar systems, yet most landfills still do not collect methane. In fact, landfills remain the third largest source of methane emissions in the U.S.

Barlaz noted that even landfills that do install a gas collection system typically wait until around the third year of operation. Yet many biodegradable materials are designed to degrade rapidly. "If something is thrown in a landfill and degrades in years one or two, then all that methane is going into the environment," he said. "The faster it decomposes, the less of the methane you're going to catch."

For those uncertain about the environmental effects of their purchasing decisions, one option is simply to avoid buying single-use products, when possible. Also, you can just buy less stuff.

The environmental consequences of landfilled biodegradable materials have led some researchers and advocates to push for more universal access to compost collection, as well as the development of altogether new materials. "We are not going to be able to solve all of the world's packaging problems with compostable products," said Rhodes Yepsen, executive director of the Biodegradable Products Institute, Inc., a leading certifier of compostable products and packaging. "There's still a place for recyclables. And we need to reduce packaging in the first place."

Toward that end, Fernandez and others are studying novel materials, including chitin, derived from the shells of crustaceans and insects, and cellulose from wood and paper.

Barlaz recommended that consumers ask their local solid waste authority if the landfill serving the community converts landfill gas to energy. If not, he said, then a traditional plastic is "better in consideration of climate change."

"Better yet, minimize your use of packaging and disposal materials," he added. "Carry a refillable water bottle and reusable cutlery."

Meanwhile, momentum is also moving towards more transparency about environmental claims. A ban on labeling plastic products as "biodegradable" — or as "compostable", unless they  meet strict standards — is scheduled to take effect July 1 in Washington State. Unlike "compostable," the term "biodegradable" has no legal enforcement nor formal definition. "Something that is billed as biodegradable should not be assumed compostable," said Staley.

As the legislation reads, "it is the intent of the legislature to authorize the state's attorney general and local governments to pursue false or misleading environmental claims and 'greenwashing' for plastic products claiming to be 'compostable' or 'biodegradable' when in fact they are not."

If the system's flaws can be overcome, composting still carries a lot of promise, according to Yepsen. The process returns carbon to the earth for sequestration. It can also help to mitigate some effects of climate change as healthy soil retains more water, which provides drought resistance. "It's a synergy between fighting climate change and the packaging problem in one singular effort," he said.