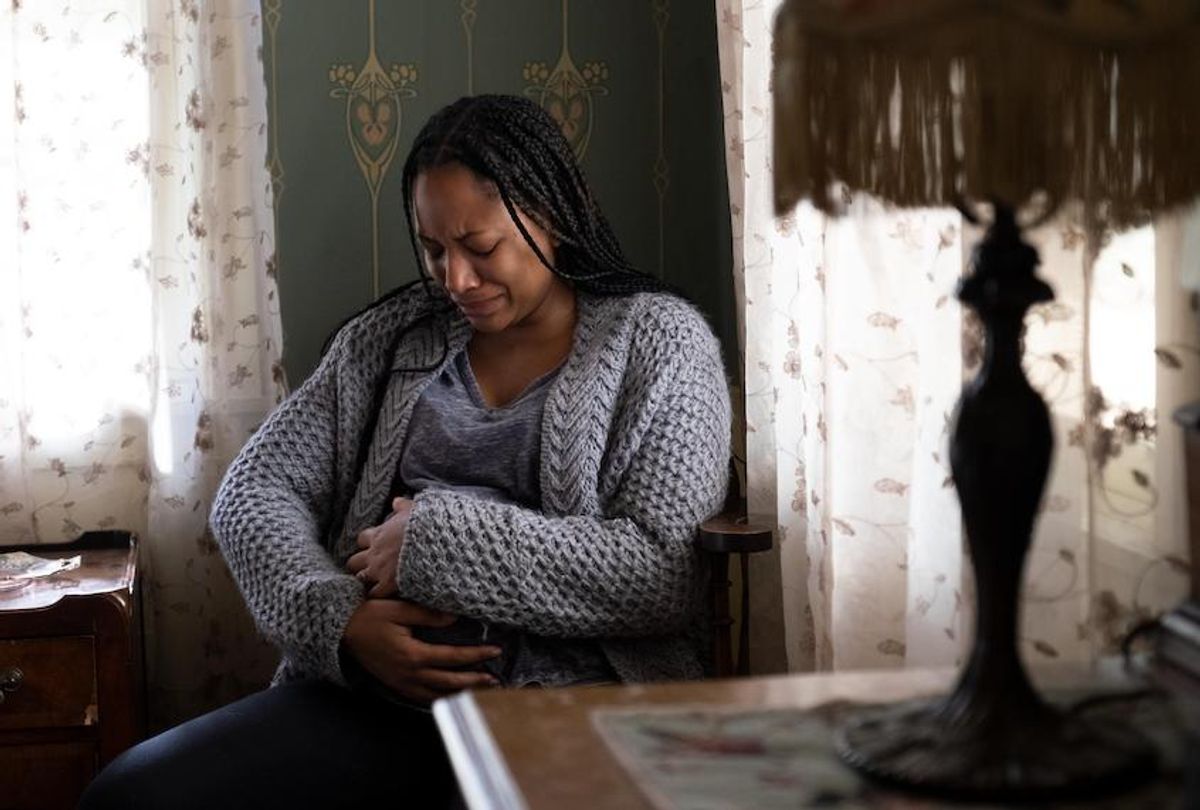 Pregnancy is already not treating Valerie (Natalie Paul) well by the time she and her doting husband Tom (Michael Cassidy) meet fellow mother-to-be Jenny (Tina Majorino) at a crunchy yoga class (mama-ste!). She's been ill, had to take a leave of absence from work, and is wholly disinterested in finding out the baby's gender. Even more worrisome, her phone won't stop buzzing, and the mix of fear and shame that accompanies every text and call from "RILEY" seems to send her down a new rabbit hole. When the peppy Jenny asks her what she's most looking forward to, Valerie has a litany of ideas: getting her body back, not puking so much, going back to work — oh, and something about the baby, maybe?

Sure, yeah, the baby will be neat, too.

"Delivered," the latest entry into Hulu and Blumhouse TV's horror anthology series, "Into the Dark," opens with plenty of fertile material about what it means to be a woman and a mother, and how those two pieces of someone's experience can limit, not enhance, the other. Directed by Emma Tammi (best known for her recent feminist horror offering "The Wind") and written by Dirk Blackman (a man! gasp!), "Delivered" roots its pregnancy-centric drama in Valerie's perspective early on, one that might not seem "likable" to audiences seeking out that sort of thing, but one that is wholly realistic and made deeply human by Paul's performance.

Valerie is afraid to be a mother, and there are many reasons why that's the case, though the episode's opening shot, which finds a heavily pregnant Valerie speeding down a road in a nearly out of control car, hints that not all of them will prove to be quite as everyday as others. That Tammi and Blackman take pains to root the outing in the real world, before zinging out into some out-of-the-box tangents, helps the entire episode go down all the more smoothly. One part "Misery," one part entirely realistic nightmare, "Delivered" doesn't break much new ground, but it does offer an entertaining twist on some classic chills.

Unlike Valerie, Jenny (an appealing Majorino in a tricky role) can't wait to be a mother. It's what she's always wanted, she tells her new pals, though she worries a bit about going at it alone. Laced through with strong table-setting and compelling pieces of backstory, "Delivered" might hit some familiar beats (OK, fine, most audiences will see its first act twist coming from a mile away), but it keeps up the tension long after other stories might run out of steam. Dark humor helps, most of which is centered around Valerie's persistent nightmares, all of which have a biting edge. Effects work is a little more touchy, but an early silly nod to body horror gives way to an impressive last act sequence that is properly gruesome.

While Valerie initially seems to fear what's growing inside her — more "The Stranger Within," less "Rosemary's Baby" — she soon comes to realize that outside forces are the real villain. Mostly set within the confines of a secluded farmhouse, Tammi still finds ways to expand Valerie's world through tricksy dream sequences and the lingering promise of an outside intruder coming to free her. Satisfying enough in its anthology-sized package, "Delivered" hints at a bigger world but never shifts too far from the limited terrors in front of it — heavy with the promise of something more but never trapped by it.

"Delivered," an episode of "Into the Dark," premiered Friday, May 8 on Hulu.