Chris Christie has moved on to cable news, but the effects of his corrupt regime linger on in the Garden State 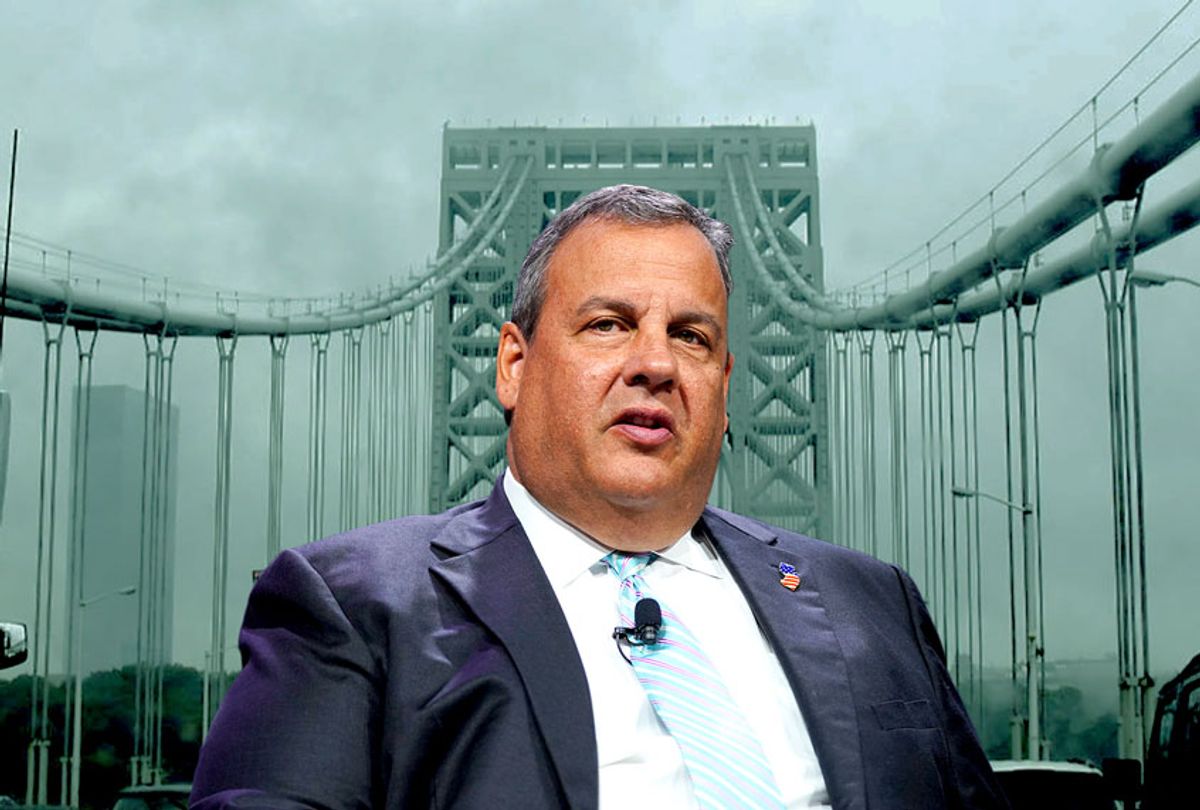 When former U.S. Attorney Paul Fishman decided to prosecute the 2013 "Bridgegate" scandal — when political appointees of then-New Jersey Gov. Chris Christie ordered lane closures that provoked massive traffic jams on the George Washington Bridge — his pursuit of the case provided a fig leaf of sorts that obscured the true extent of the rot at the heart of New Jersey's political culture.

Last week, the U.S. Supreme Court unanimously overturned the convictions of former Christie staffers Bridget Kelly and Bill Baroni, and that fig leaf was torn off.

What was revealed is a state that has always been overly reliant on federal prosecutors to flag the kind of systemic corruption that Bob Ingle and Sandy McClure described in the "Soprano State."

While the high court recognized that the plot to punish Fort Lee's Democratic mayor, Mark Sokolich, for not endorsing Christie's re-election, had "jeopardized the safety of the town's residents," the justices held that Fishman's use of federal fraud statutes to hold the Bridgegate defendants accountable was a misapplication of those laws.

In the high court's reprise of the facts of the case, it detailed that as a consequence of the GWB lane closures in September of 2013, school buses stood in place for hours, an ambulance struggled to reach the victim of a heart attack and "police had trouble responding to a report of a missing child."

The justices concluded, however, that the "upshot is that federal fraud law leaves much public corruption to the States (or their electorates) to rectify."

As any consistent observer of New Jersey has observed, we have had to rely on U.S attorneys to provide any meaningful check on our homegrown corruption. As with 19th-century pioneers who relied on a U.S. marshal, it has been larger than life federal prosecutors like Herbert J. Stern and the Frederick B. Lacey who attacked the systemic and endemic corruption that has long defined my home state's politics.

Each chapter of New Jersey's encyclopedia of political corruption features a federal show trial like the 1970 prosecution of two-term Newark Mayor Hugh Addonizio. The former congressman was convicted of getting $1.4 million in kickbacks from organized crime figures who had gotten a lock on municipal contracts.

By 2009, in its Operation Big Rid III, the FBI had to resort to using buses to pick up dozens of local elected officials and grifters implicated in a sprawling political corruption investigation that uncovered money laundering, organ brokering and bribery.

In the intervening years, well into the 21st century, federal prosecutors have racked up a long list of one-off public corruption cases sufficient to fill a rogue's gallery.

So why is it that our county and state law enforcement seem so blind to the political corruption that is such a part of New Jersey's political landscape?

Legal experts have long observed that because New Jersey's attorney general, the state's top law enforcement official, is appointed by the governor — rather than elected by the voters, as in the vast majority of states — the office lacks sufficient independence to freely pursue cases like Bridgegate.

"Yes, it is a weakness in the constitutional system," said Bruce Rosen, a former journalist and now an attorney who specializes in news media right-to-know cases. Rosen added that while the Supreme Court inferred that the pursuit of a Bridgegate case should have been "a local job," without an independent state Attorney General there are "overwhelming political pressures" that permit political corruption to go ignored.

Having an elected attorney general is surely no panacea, as in the case of New York right next door, with its own history of extensive corruption. "The problem with anything that is elected — an attorney general or a judge — they have to get re-elected, and a lot of times they do and say things that are geared to that re-election," Rosen said.

It was Hoffman, not long after the Bridgegate scandal broke, who deferred to U.S. Attorney Fishman and opted to not pursue the case. At the time, the Star-Ledger reported that the move rankled "some veteran prosecutors who say acting Attorney General John Hoffman was too quick to cede a major corruption case to federal authorities."

Lawyers and legal experts interviewed by The Star-Ledger said the Attorney General's Office was better-positioned to investigate the September lane closings because violations of state law are more apparent, and state prosecutors would be more familiar with the cast of characters.

"The Attorney General's Office ought to be involved," former Attorney General Robert Del Tufo told the paper, suggesting that Hoffman was "staying clear" of the matter "because of the implications of being in Christie's administration."

Christie had planned to nominate Kevin O'Dowd, his chief of staff, as attorney general, but had to drop that idea amid the robust investigation undertaken by both the New Jersey Assembly and Senate into the Bridgegate gambit.

When Fishman announced the Bridgegate indictments and his convoluted theory of his prosecution in 2015, my questions to him centered on what I still believe to be the most unexamined facet of the case, and perhaps the one that should concern us most.

It had nothing to do with the alleged fraud, but was about how Christie's crew had put the entire region's security at risk.

Back in 2013, the Christie partisans who executed the Bridgegate retribution on the George Washington Bridge — which has long considered a top terrorist target — picked the anniversary of 9/11 to execute their plan. In the process, they hampered the ability of Fort Lee's emergency services, including police officers and firefighters, to respond to urgent needs.

In September 2014, the Bergen Record reported that during the lane closures in 2013, when Port Authority police officers used their radios to communicate that the altered traffic pattern was creating "hazardous conditions" on local Fort Lee roads, their Port Authority police supervisors told them to "shut up."

As it turned out, the weakest link in protecting the GWB was its own police department, which enforced the traffic pattern that closed the lanes.

By compromising the Port Authority police — a crucial element of New York and New Jersey infrastructure and law enforcement — the conspirators left us immensely vulnerable. Had there actually been a terrorist attack on the George Washington Bridge during those four days, police response would clearly have been compromised.

Maybe that wasn't a crime. But it should be.