Republican Gov. Kristi Noem has not issued stay-at-home orders for the state of South Dakota 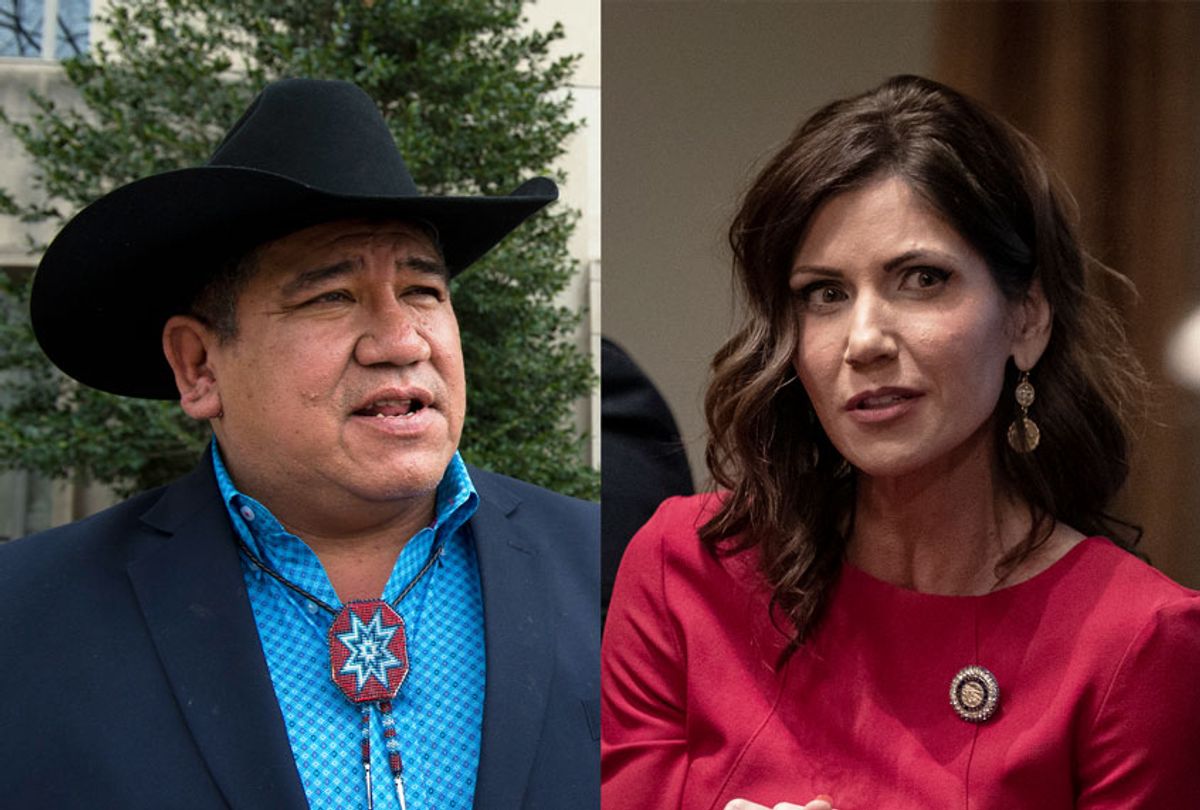 "We have an inherent and sovereign right to protect the health of our people, and no one — man or woman — can dispute that right," Julian Bear Runner, president of the Oglala Sioux Tribe, said in a Facebook video released Saturday.

Noem on Friday sent the tribes separate letters demanding that they dismantle checkpoints screening for COVID-19 on highways entering their territories or face federal lawsuits, citing an April 8 memo from the U.S. Department of the Interior's Bureau of Indian Affairs.

"We are strongest when we work together. This includes our battle against COVID-19," Noem said in the letters. "I request that the tribes immediately cease interfering with or regulating traffic on U.S. and state highways and remove all travel checkpoints," she wrote, claiming the checkpoints interfered with state commerce.

The memo said tribes could close state and U.S. roads only after they "consulted and reached an agreement addressing the parameters of the temporary road closure or restrictions."

Cheyenne River Sioux Tribe Chairman Harold Frazier argued on Friday that "the English definition of consultation is 'a meeting with an expert or professional, such as a medical doctor, in order to seek advice.' In the Lakota language, wóglaka means 'to speak about something.' In meeting with county commissioners, municipal, South Dakota Department of Transportation, public schools and federal agencies, we have met the definition of consultation in both of our languages."

He said the checkpoints were "in full compliance" with a Interior Department memo, and the tribe "has not closed non-travel roads or highways owned by the state of South Dakota or any other government."

Frazier told Noem that "you continuing to interfere in our efforts to do what science and facts dictate seriously undermine our ability to protect everyone on the reservation."

Considering the state's lax orders, the tribes argue that the checkpoints are the best way reservations can protect themselves against the pandemic, citing an under-equipped medical apparatus serving 12,000 residents which has one eight-bed facility with no ICU.

The Cheyenne River Sioux Tribe's policy allows residents to travel across reservation lines to conduct essential activities like healthcare appointments or getting supplies as long as they do not visit areas that the state has deemed infection "hotspots." Tribal residents must complete a health questionnaire each time they pass through a checkpoint.

State residents who do not live on the reservation can visit as long as they are not traveling from a hotspot and it is for an essential activity. They must also fill out the questionnaire. People from a hotspot or from outside the state cannot enter the reservation unless they get a travel permit from the tribe.

Seventeen South Dakota lawmakers on Saturday backed the tribes, citing the 1851 and 1868 Fort Laramie Treaties and a 1990 ruling by the 8th Circuit Court of Appeals, which they said ruled "the State of South Dakota has no jurisdiction over the highways running through Indian lands in the state without tribal consent."

The lawmakers urged the government and tribes to reach a compromise, saying they did "not wish to be party of another lawsuit that will ultimately cost the people of South Dakota more money."

The next day, the governor's office reasserted that the checkpoints "are not legal" and threatened to "take the matter to federal court" if the tribes did not reopen.

The tribes last clashed with Noem over the construction of the Dakota Access Pipeline, progress of which has halted. The state passed a law last year criminalizing anyone who organizes a protest which eventually turns violent, punishable by up to a decade in prison and $100,000 in fines.

Frazier said the tribes want to "save lives rather than save face."

"We will not apologize for being an island of safety in a sea of uncertainty and death," he wrote.

At least 3,517 people in South Dakota have tested positive for the COVID-19 and at least 34 have died, according to data from Johns Hopkins University.