"Under the McConnell amendment, Barr gets to look through the web browsing history of any American" 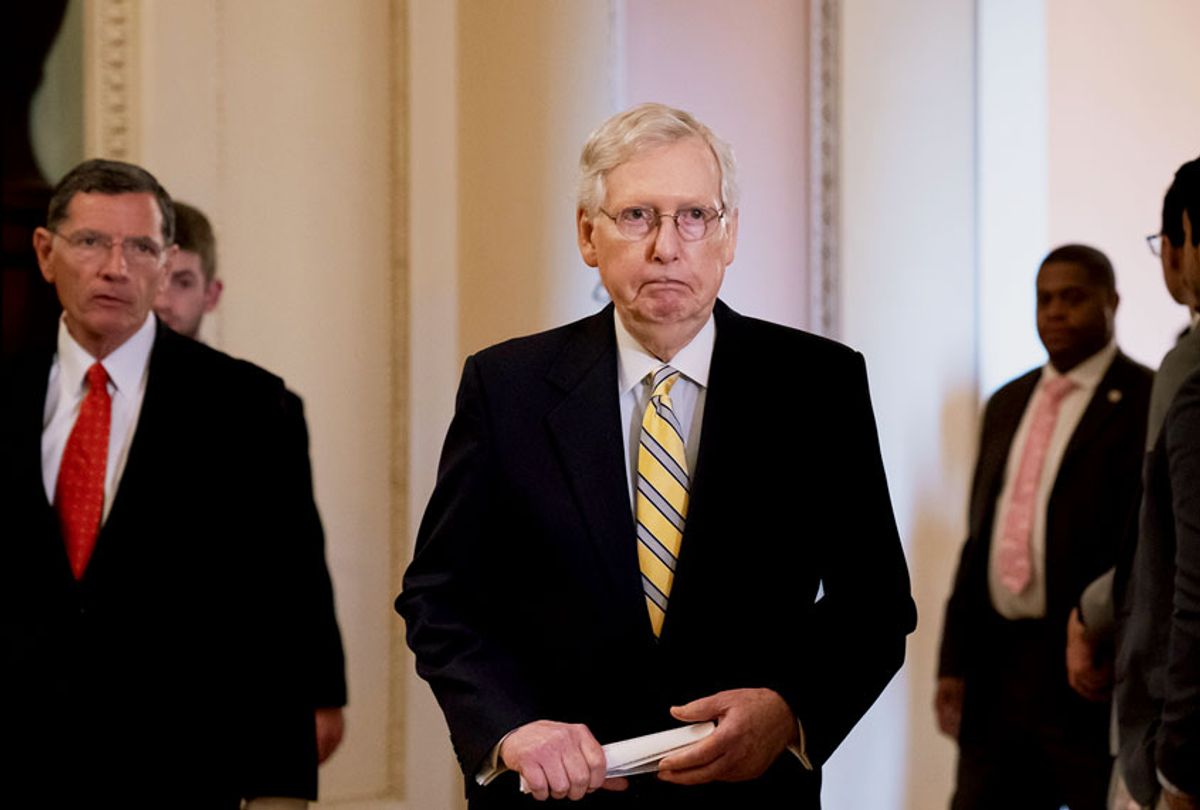 "These amendments would pretty much guarantee the ability of an incumbent administration to spy on its political opponents without consequence."

McConnell's amendment, which the Senate began debating Wednesday as lawmakers took up the reauthorization of the 2001 PATRIOT Act, would explicitly permit the FBI to collect records of Americans' internet search and browsing histories without a warrant. It would also mandate that Attorney General William Barr, and his successors, conduct an annual review of the FBI's submissions into the Foreign Intelligence Surveillance Act (FISA) Court.

Barr would be permitted to review for "accuracy and completeness" evidence presented to the FISA Court by the FBI regarding potential surveillance targets.

"Under the McConnell amendment, Barr gets to look through the web browsing history of any American — including journalists, politicians, and political rivals — without a warrant, just by saying it is relevant to an investigation," Wyden told the Daily Beast this week, before speaking out against the amendment on the Senate floor.

"Typical Americans may think to themselves, 'I've got nothing to worry about, I've done nothing wrong. The government has no reason to suspect me of anything,'" said the senator. "Unfortunately, the question is not whether you did anything, the question is whether a government agent believes they have the right to look at your web searches . . . It is open season on anybody's most personal information."

"If that doesn't give you chills I don't know what will," Wyden added on social media. "I'm fighting it every step of the way."

Evan Greer, deputy director of the digital privacy group Fight for the Future, was more succinct in her rejection of McConnell's proposal:

An amendment proposed by Wyden and Sen. Steve Daines (R-Mont.), which would have required the Justice Department to show probable cause before collecting data under the PATRIOT Act, was voted down by one vote on Wednesday. Journalist Jeremy Scahill denounced 10 Democratic senators who joined the majority of Republicans in opposing the bill, as well as Sen. Bernie Sanders (I-Vt.), who did not attend the vote.

Critics raised concern that the McConnell amendment would allow the Trump administration to spy on its political opponents, with Barr giving approval of evidence used to argue in favor of beginning surveillance.

Under the proposal, the FISA Court and its amicus — an attorney appointed to challenge the government's submissions for potential surveillance — would be limited in their ability to question the FBI's reasoning.

McConnell would limit the involvement of an amicus only when the FBI submits an application to "targe[t] a campaign for federal office or an application that targets a United States person when the application relies for its criminal predicate on only the provisions of the Foreign Agents Registration Act."

Sens. Patrick Leahy (D-Vt.) and Mike Lee (R-Utah) proposed an amendment which would require an amicus to challenge evidence presented for targeting "a domestic religious or political organization," a "domestic public official or political candidate," or their staff, according to The Daily Beast.

"Adversarial process is a cornerstone of our legal system," wrote Neema Singh Guiliani and Billy Easley of the ACLU this week. "Americans expect that when the government makes a claim in a court of law that they aren't the only voice heard in the courtroom."

Singh Giuliani told The Daily Beast it was "bizarre" to "create an amicus to participate when targeting political candidates, but we're not going to provide that same oversight in cases involving religious organizations, domestic news media or everyday individuals who are facing new or significant civil rights concerns."

"It's hard to look at that amendment and conclude it's intended to really address not just problems exposed by the Carter Page report but the subsequent IG audit," she added.

"McConnell is literally trying to take a privacy safeguard designed for the press and religious groups and instead give it only to politicians and people suspected of being foreign agents. He's also trying to sneak warrantless surveillance of internet and search histories into an amendment that claims to prohibit it," Sean Vitka, senior policy council for the group, told The Daily Beast.

On Twitter, Wyden wrote that whistleblowers like Dr. Rick Bright and the anonymous person who disclosed the president's attempt to pressure the Ukrainian government into investigating former Vice President Joe Biden could be targeted for surveillance under Barr's expanded powers.

"These amendments would pretty much guarantee the ability of an incumbent administration to spy on its political opponents without consequence," wrote Charles Pierce at Esquire.