Trump is a "wartime president," all right: He thinks the culture war will save him

With a reheated culture war and vague threats against Democrats, Trump thinks he can bluff his way to victory 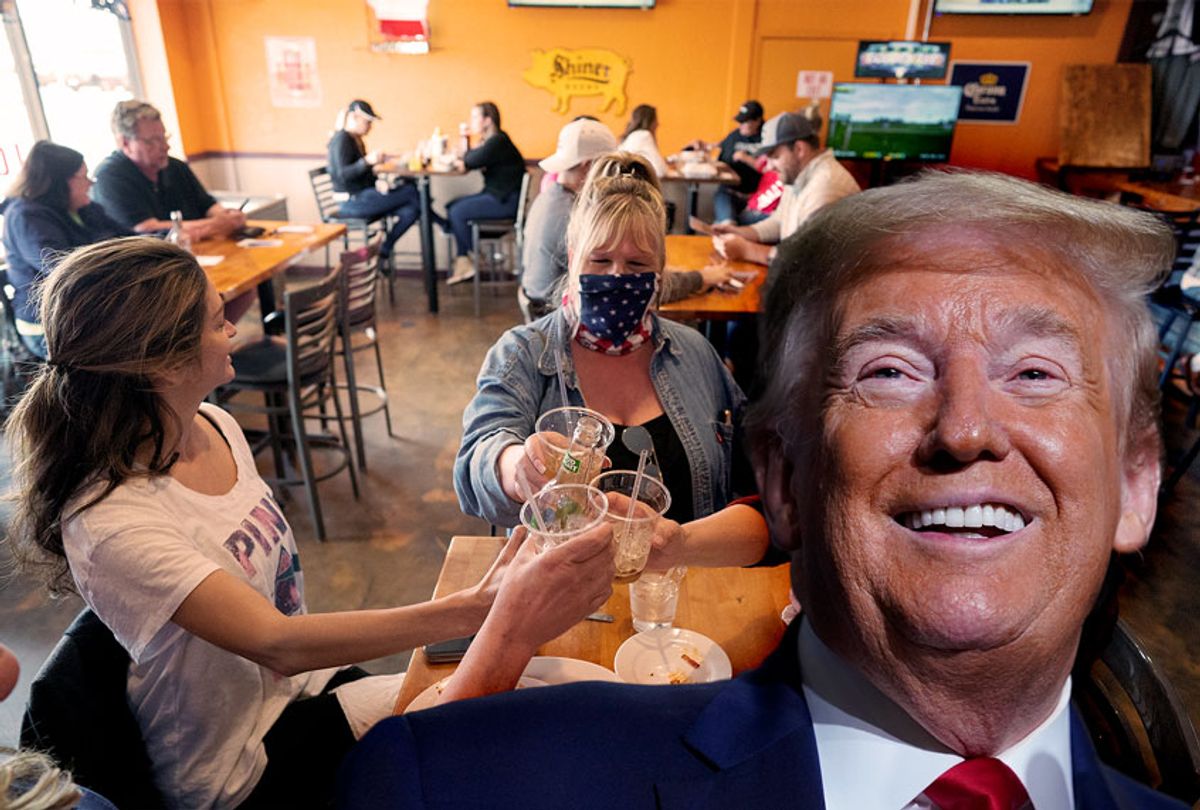 Donald Trump | Bars, restaurants and everything else is reopening in Wisconsin after the state Supreme Court struck down the state's stay-at-home order Thursday May 14, 2020 in Hudson, Wisconsin (Jerry Holt/Star Tribune via Getty Images/AP Photo/Evan Vucci/Salon)
--

A few weeks ago, in one of his many branding brainstorms during this COVID-19 crisis, President Trump started calling himself a "wartime" president who was valiantly leading the country in the battle against "the invisible enemy." This was rolled out like a campaign slogan, indicating that it was part of a planned strategy to put Trump at the center of the response to the pandemic.

In remarks obviously prepared by someone else, he evoked World War II and said:

Not bad. This was in mid-March, during the period when he was appearing at the task force briefings and pretending to be in charge, before he realized that everything had gone awry and that he was being blamed for the failures. In fact, it was just a day later that he started passing the buck to the governors for failing to save their states, explaining that the federal government is simply "back-up" and not a "shipping clerk."

In the end, Trump didn't have anything close to the ability to take charge of the response and do what any other national leader would have done in the circumstances. So the nation's pandemic response has remained chaotic and unfocused and now the states are simply operating on their own.

But that doesn't mean that Trump is not a wartime president. He is. It's just that he's not bringing the country together to fight "the invisible enemy." He's dividing the country to fight the culture war. It's the only battle Trump knows how to fight, and he clearly believes it's necessary for him to win re-election, which is the only issue he really cares about.

The coronavirus is just another weapon to use against his political enemies. He's been single-mindedly encouraging the governors to ignore the guidelines put out by his own administration and "open up" without regard to any concerns about spreading the virus.

Bars were bustling anyway as some Wisconsin residents, without wearing masks or social distancing, rushed out to start drinking the minute the ruling came down. With the help of right-wing media, he is attempting to turn the pandemic into a just another culture war clash.

Here's an example of how that's playing out in the Long Island suburbs of New York:

The jury is still out on whether this represents more than a small number of Republicans. Polling suggests that the vast majority of Americans, including significant proportions of the Trump base, such as senior citizens, aren't signing up. The problem, of course, is that it only takes a few irresponsible folks to spread this highly contagious virus to a whole bunch of others who didn't enlist in this particular battle.

Trump isn't relying on this coronavirus backlash alone. He's opened up a second front in his war. The "Obamagate" frenzy that broke out this week on the news of Attorney General Bill Barr's latest move to nullify the Mueller investigation has the right wing in a state of mass hysteria, with Trump leading the charge. They're gearing up for hearings in the Senate in June and the highly anticipated conclusion of special counsel John Durham's investigation appears to be timed to coincide with it.

Trump is telling the troops that Barack Obama himself — and of course Joe Biden, his apparent November opponent — may go to prison for their nefarious crimes (none of which he is able to articulate in detail.) He knows his people. There is nothing they would love more than to have Michael Flynn lead a "Lock them up!" chant at the virus vector also known as the Republican National Convention, which the party still plans on holding in person this summer.

Trump apparently figures that pretending the pandemic is over and taking up some good old-fashioned Obama bashing is his ticket to re-election. He should probably think twice. He might be able to energize his base, but attacking the most popular Democrat in the country will also set the Democratic base on fire. Paternalistically telling seniors that he loves them isn't likely to make them feel better about dropping the ball on a crisis that may kill them in large numbers. And as Sen. Lindsey Graham of South Carolina said, in uncharacteristically defying Trump's wishes to call Obama before the Senate Judiciary Committee: "Be careful what you wish for."

Perhaps even more alarming than Trump's depraved re-election campaign is the war he is more broadly waging against "Blue America." Trump has never seen himself as the president of any citizen or state that didn't vote for him, and is continuing to use whatever tools he has at his disposal to further divide the country.

The Atlantic's Ron Brownstein has analyzed the president's recent behavior during the crisis and finds numerous instances of the administration and Trump himself institutionalizing this notion — with Republican officials backing his move.

Even aside from the empty threats to throw Barack Obama in jail, Bill Barr's moves to turn the Department of Justice into a tool for presidential retribution against Trump's political enemies, and the ongoing purge of anyone Trump believes has failed to show loyalty, throughout the COVID-19 crisis Trump has made clear that Democratic governors need to grovel before him if they expect any federal aid. He did the same thing, of course, with Puerto Rico after Hurricane Maria and California in the wake of the devastating wildfires of the last two years.

Trump suggested that governors of various states would have to "negotiate" with him and agree to give up sanctuary cities in exchange for federal aid. He and Senate Majority Leader Mitch McConnell even cooked up a plan to deny pandemic aid to liberal-leaning states, literally calling it "No Blue State Bailouts." Republican governors are now following his lead and doing the same with the Democratic mayors of major cities. After years and years of bellowing about "local control," they are now overruling mayors' stay-at-home orders in an effort to force people back to work.

As Brownstein writes, "From the office that symbolizes national unity, Trump is pursuing a form of secession from common purpose." Rather than doing the one thing that might have assured his re-election — guiding an effective national response and bringing the country together to confront the gravest health crisis in a century and the worst economic upheaval since the Great Depression — Trump is consciously tearing the country apart to satisfy his ego and give his followers the red meat they crave.

Americans are worried about losing their jobs, their businesses, their homes, their loved ones. They are worried about dying. Donald Trump thinks he can keep playing his greatest hits and voters will rise up and reward him. He wants to do what he loves, which is campaign and campaign dirty. That's the only part of the job he knows how to do.