For decades, food safety experts have warned that the ways we raise and kill animals pose risks to our health 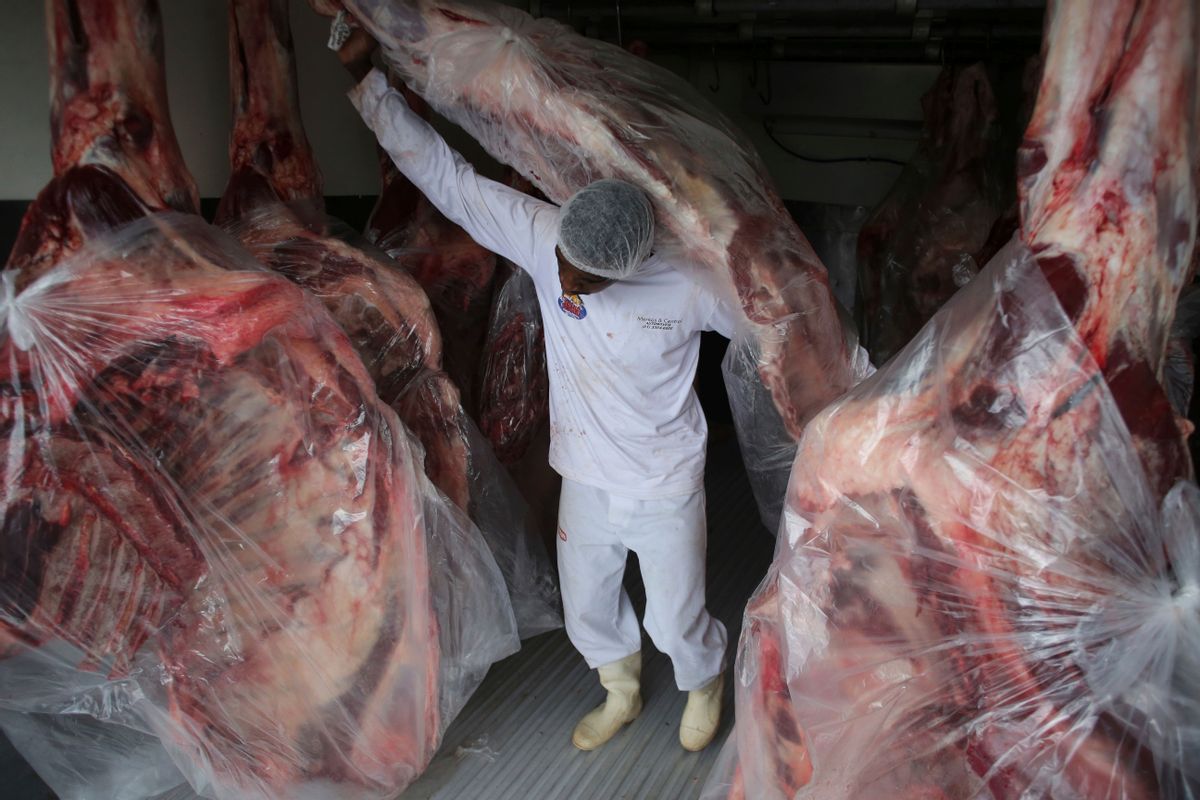 A man delivers sides of beaf to meat to a butcher shop in Brasilia, Brazil, Monday, March 20, 2017. The European Union's spokesman in Brazil says the union is temporarily halting some imports of Brazilian meat amid an investigation into a massive scheme of meat adulteration, which involved some of the country's largest producers. (AP Photo/Eraldo Peres) (AP)
--

Slaughterhouse workers, who have one of the most dangerous jobs in the country, are walking off the job to protest even more hazardous working conditions during the COVID-19 pandemic.

A worker who walked out at a Perdue plant in Georgia told a local CBS affiliate on March 23 that, "We're not getting nothing — no type of compensation … no cleanliness, no extra pay — no nothing. We're up here risking our life for chicken."

It is no surprise that, even in this time of crisis, giant meat companies like Tyson Foods, Pilgrim's Pride, Sanderson Farms, and others are neglecting their workers. Major meat companies are regularly the target of worker protection campaigns, animal cruelty investigations, and other scandals. But nothing has stopped them from maintaining their standard business practices at the expense of the most vulnerable workers trapped in their grips.

As the outbreak reaches facilities that feed the United States's obsession with meat, workers are beginning to fear for their lives, and their employers have yet to assuage their concerns. And help isn't coming from the federal government either — President Trump's recent executive order mandating that these facilities stay open blatantly disregards the risks this poses to the workers.

Our food system has been broken for decades, but the pandemic is putting the dirty laundry under a microscope for all to see. There's never been a better time to take a more critical look at our food system and the companies that run it — and to demand better.

As an animal welfare advocate who has dedicated my career to reforming the factory farming industry, I'm deeply familiar with major meat companies' injustices against those who have few means to fight back. I spend my days trying to convince the likes of Tyson executives that it is immoral to breed a chicken to grow so grotesquely large, and so quickly, that she can't even stand up or walk.

But this pandemic highlights that animals are not the meat industry's only victims. All who fight injustice must take a stand for slaughterhouse workers, who are primarily low-income people of color who often take these jobs because few other opportunities exist in their communities. They suffer repetitive stress injuries from all-day cutting, often work in near-freezing temperatures, are given very few breaks, and must keep up with a slaughter line that moves dangerously fast — among other hazards. Now, they're forced to endure all this while standing shoulder to shoulder with co-workers who may be sick.

While meat companies profit as consumers stock up on their products, they still refuse to protect the very workforce their bottom line relies on. In these few weeks, nearly 6,500 workershave tested positive for COVID-19 throughout 115 plants in 19 states, and hundreds of workers have left their posts at plants in Georgia, Colorado, Virginia and Illinois to protest these conditions. Devastatingly, we are now seeing several deaths of plant workers due to COVID-19, making this a literal life-or-death decision for many workers.

Tyson has responded by announcing that it will provide $60 million in bonuses — a figure that may sound substantial until you look closer. The bonuses amount to only $500 per person, and workers won't receive them until the first week of July. Sanderson Farms, which has had multiple outbreaks in its plants already, said in a statement that it would give roughly $1 per hour bonuses from March 30 to June 26 but only to workers who maintain perfect attendance for the entire week. These measures fall far short of what's needed to support workers risking their lives to feed their families.

Workers have been fighting for paid sick leave, slower slaughter line speeds and safer conditions for years. Animal advocates have released investigation after investigation revealing systemic animal abuse. And food safety experts have warned for decades that the ways we raise and kill animals pose serious risks to our health.

But during this pandemic, when simply going outside puts us at risk of contracting a potentially deadly virus, we are learning a disturbing lesson yet again: We cannot expect the factory farming industry to govern itself and protect the lives of its workers.

Our food system is in desperate need of repair — if not a complete overhaul. This pandemic offers a pivotal moment to reevaluate how food gets to our tables and to consider the safety and health of those who suffer for it to get there. If we don't, we're at risk of maintaining a system that prioritizes the profits of a few meat companies over human rights, animal well-being and consumer interests.

Taylor Ford is director of campaigns for The Humane League, an international nonprofit ending the abuse of animals worldwide. The Humane League has been ranked “Best in America” by the Independent Charities of America and named a “Top Charity” by the charity navigator Animal Charity Evaluators. Follow the Humane League on Facebook, Twitter and Instagram to take action for animals and make a difference.