"Rick and Morty" review: "The Vat of Acid Episode" is a solid high-concept escape act

Even as it's stuck between an unexpected event and a spite-driven adventure, there are existential ideas to chew on 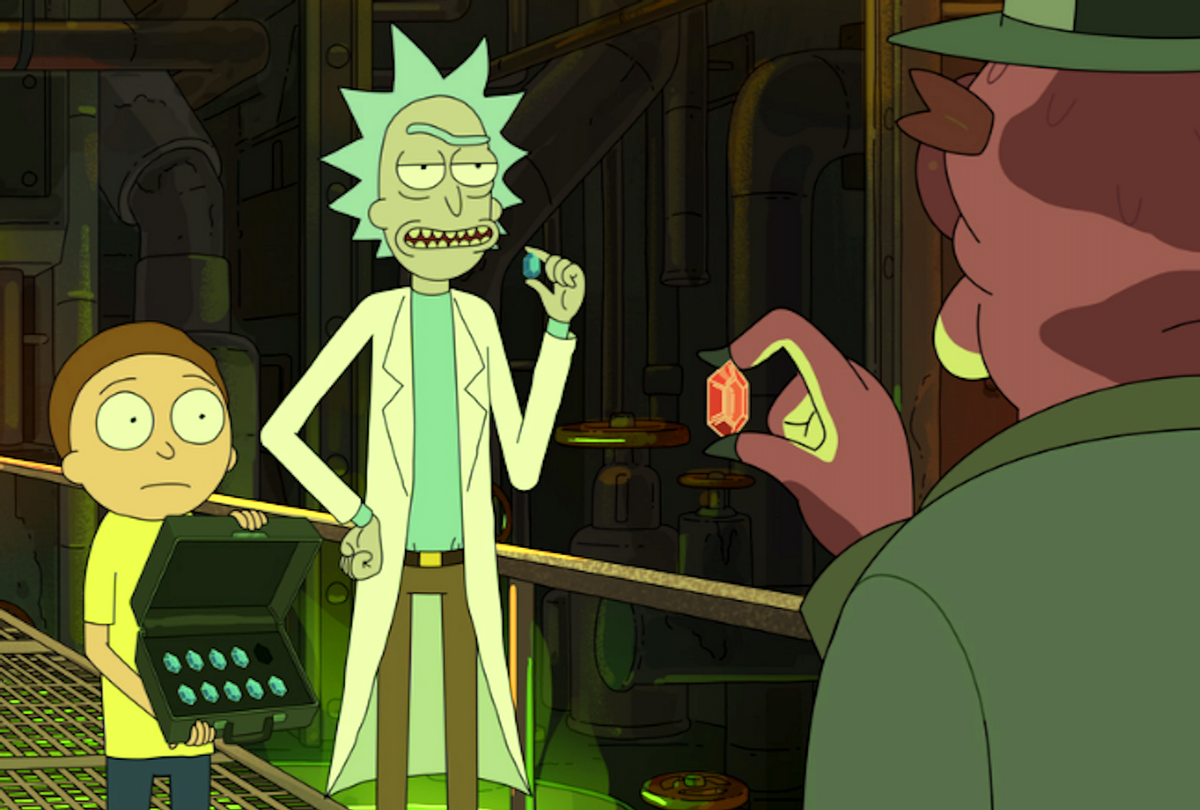 The following review contains spoilers for “Rick and Morty” Season 4, Episode 8, “The Vat of Acid Episode.”

On the night when the TV world bid farewell to "The Last Dance," it seems all too fitting that this week's episode of "Rick and Morty" also centers on a man whose genius is very often fueled by small grievances and the settling of minor slights.

At the start, "The Vat of Acid Episode" seems like it's destined for bottle episode glory. Thwarted by alien mobsters in a crystal exchange gone bad, Rick's plan to escape involves sitting at the bottom of a drum of green liquid until their would-be killers leave. The first steps in Rick's plan go off without a hitch: Rick and Morty use breathing tubes connected to the bottom of the vat and release a broken-up skeleton to fool anyone looking down on it from above. But when the gangsters linger far longer than expected, Morty emerges from beneath the surface, leaving Rick to wipe out the small group of enemies with whatever plasma-based ammo is in his not-a-portal-gun gun.

Read more from IndieWire: "Hightown" review: Cringey Provincetown drug thriller is all grit and no glitter

The ensuing fight on the spaceship ride home leads to a Morty and Rick argument that eventually results in Morty broaching the idea of a specific kind of device. The best way to avoid unnecessary death and embarrassment is to have a button that could save your position in life like a video game. If you died (or failed so miserably that you basically wanted to), you could revert to your last "save" and replay anything.

Notably for this show, "The Vat of Acid Episode" is also the eighth of this season. In the past, that slot has been reserved for the pair of "Interdimensional Cable" episodes and "Morty's Mind-Blowers," all of which were potpourri-style catchalls for shorter jokes. Once Morty gets his video game device, what follows is a protracted montage that's the closest this episode comes to following in that tradition. As Morty uses it to pants Mr. Goldenfold, get Jessica's attention, and everything in between, the episode teases out the logistics and unintended consequences that come with video game rules and logic.

The centerpiece of this montage (and a sequence that rivals "Snake History" for the show's best self-contained stretch of the entire season) is a dialogue-free saga of Morty and an unnamed girlfriend. A chance meeting at a coffee shop leads to blossoming love which then turns into a post-plane-crash fight for survival in deadly, remote Arctic tundra conditions. Assuming that's original music playing underneath Morty's eventual rescue (and Jerry's complete doofus move that sends Morty back to his last "save" outside a strip club), it's a nice showcase for Ryan Elder, too.

This bizarre spin on the "Married Life" sequence from "Up" is also a prime "raises more questions than it answers" sequence. Even if the full runtime of "Vat of Acid" isn't given over to vignettes like this, it still shows that there's more here than answering a hypothetical of what Morty would do if he was free from a personal sense of failure. It's also built on a strong-enough sense of Morty's anxieties that you can almost hear him trying to explain their entire pre-reset relationship, as if he could fast-forward to that point from the very beginning of their meet-cute.

After Morty takes responsibility for all the actions he undid with the videogamizer, various judicial, legal, activist, and law enforcement entities descend on the Smith house to hold Morty accountable for his crimes. (Between absorbing all the thousands of quantum versions of himself and knowing all possible future outcomes that might result from his actions, this has to be the most psyche-fracturing season for ol' Morty. Even if he probably deserves it for some super manipulative choices along the way.)

This episode's premise gives Rick a chance to completely wipe everything out before returning to the home dimension, but there's at least an acknowledgment that there are risks to a perfectly clean slate. At the risk of yet again armchair psychologizing "Rick and Morty" on a week-to-week basis, that dovetails with yet another example of the ongoing Rick-as-show connection rearing its head again. Morty's challenge to him that he can't build the video game control isn't enough of a veiled reference, Rick explicitly wondering if he has it anymore feels a little like the show psyching itself up to deliver a late-season curveball.

"Vat of Acid" is one, but not exactly in the way it might be intended. Maybe it's the priming effect of that little on-screen subtitle on the opening credits title card (something it never even did for "The Ricklantis Mixup," the most off-the-board episode yet), but this entire episode seems a little off-kilter. Not necessarily in a way that detracts from the show's quality, but just made it noticeably different. The Morty and Rick chemistry, pushed more angry than usual, has a different temperature.

There's also the self-referential uptick in recent weeks. Self-awareness has obviously always been in the DNA of this show. Still, there's a growing numb of taking those nods to pop culture and storytelling trends and wedging in a bunch of added comments about recent "Rick and Morty" narrative choices. The reference here to "Claw and Hoarder" makes surface-level sense (writer Jeff Loveness wrote that dragon-themed episode and co-wrote "Vat of Acid" with Albro Lundy), but the balance between self-deprecation (lotta selfs, I guess) and just pointing out past things that have happened on the show is getting muddier by the week.

Even though that giant gaggle of people seeking restitution from Morty is a chance for Rick to list them all out loud, bringing them all to the driveway sets the potential for one of the more satisfying choices a "Rick and Morty" episode can make. When the events of an adventure are solely left up to Rick and Morty to self-police, the lesson is only as good as their willingness for reflection. If things reset to how they were before the episode's start, all you're left with is what transpired. In the tradition of "Rick Potion #9," any time there's a sense that some consequences will linger beyond the credits, it doesn't just elevate this single story. It gives the whole show a firmer foundation (regardless of whether or not a Mazzy Star song is involved).

So even though "Vat of Acid" doesn't quite capitalize on its full potential, there's still plenty more to latch on to than the less successful chapters in Season 4. Even if things revert back to normal next week, this slight detour at least has a decent sense of life beyond the frame.