Will the millennial left make peace with the "lesser evil" of Joe Biden? It's complicated

Is the "New New Left" being immature if it rejects compromise? At some point, we must demand real change 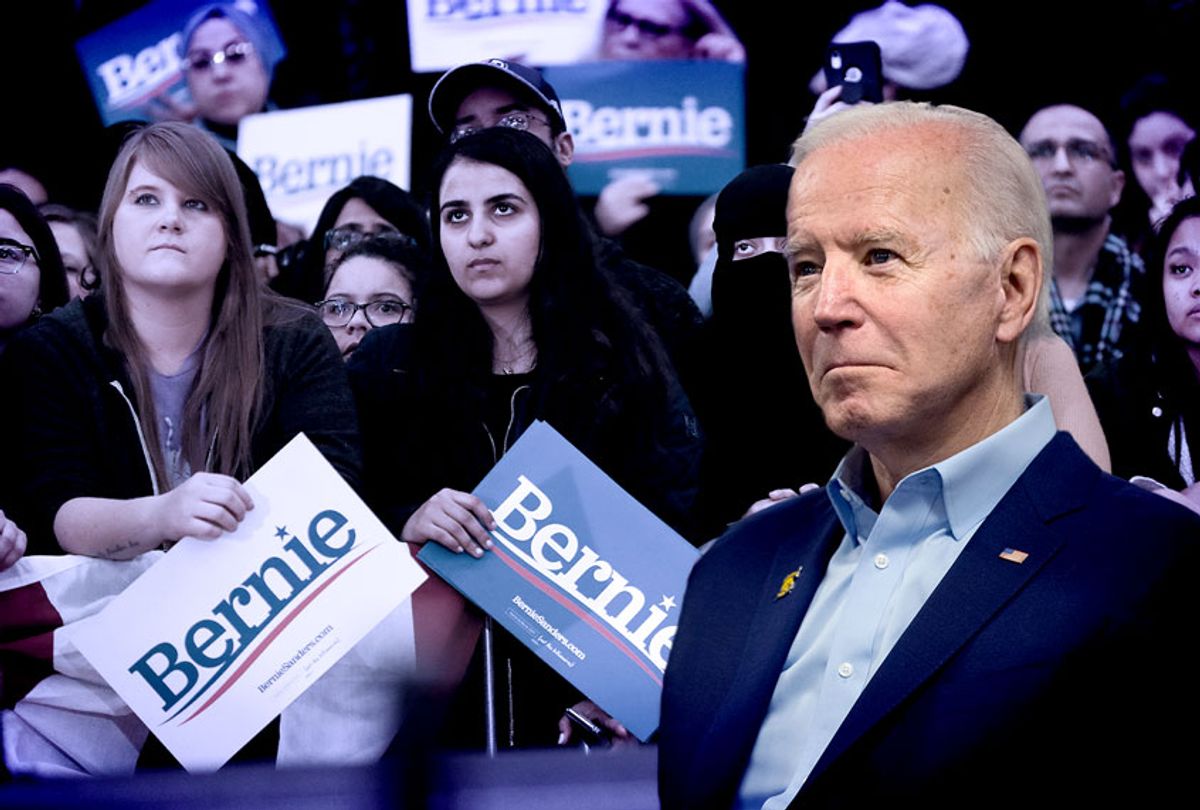 In 2013, The Atlantic wrote about a then-viral meme called "Old Economy Steve," designed to contrast the historical economic prosperity of Baby Boomers  with their condescending attitudes toward struggling younger people who had grown up under far more dire conditions. "Had a great union job," one read at the top, with Steve's voice at the bottom: "Unions are ruining the country." Another read: "Becomes homeowner at 22. Tells son's generation it's lucky because it can afford $200 smartphones." Or just: "Graduates college. Gets hired."

Last week, we heard from a commentator one might call "Old Politics Mitch." That would be historian Mitchell Abidor, who wrote in a New York Times op-ed that "young socialists" were failing to listen to their elders in the "Old New Left" of the 1960s, many of whose luminaries recently published an open letter in The Nation urging the "New New Left" to support Joe Biden in this year's presidential election, now that Bernie Sanders' campaign has ended.

Abidor argues that today's youth are repeating the irresponsible errors of the New Left of the 1960s by refusing to endorse Biden on the basis of "doctrinal purity." He thinks these privileged young socialists will be responsible if Donald Trump is re-elected — a rather high estimation of their powers — and that therefore they will be morally culpable for the consequences suffered by the less privileged. "Taking a principled stand is courageous only when those taking it put themselves at risk," Abidor writes. "Placing others at risk requires no courage at all."

A moment's reflection shows that the open letter, along with Abidor's article endorsing it, is an admission of defeat by those who realize they have no way to mobilize the approximately 100 million eligible American voters who decide it is not worth their time to cast a ballot. Instead, these defeated veterans of a bygone struggle blame a few thousand young people who refuse to legitimate a system that rules out the life-saving policy changes they have been patiently and painstakingly advocating.

Abidor is a historian of the extraordinary student uprising and general strike of France in May 1968, author of the oral history "May Made Me" and editor and translator of "Down With the Law," an important volume of 20th-century French anarchist thought. In this context, he appears to be a classic example of someone who has "grown up" and now believes that it is noble to abandon the imagination and intransigence of youth, which he dismisses as purely "quixotic." "It is a quirk of history," Abidor writes, "that the young radicals of that time are the pragmatic elders of today."

Of course, not all the elders of that generation take this condescending and unprincipled posture. The French philosopher Alain Badiou, who still views the task of the philosopher in the Socratic terms of "corrupting the youth," reflects on his own participation in the French revolt of May '68 as an experience to which he must still remain faithful, including to one of its famous slogans: "Elections, a trap for fools!"

The alternative, to which so many of Badiou's generation fell prey, is a position of ethical betrayal. These "grown-ups" now claim not only that the aspirations of the past are no longer relevant, but that they were always false, always an illusion. They're like those bitter people who spurt out at former partners after a breakup, "I never loved you anyway!"

Indeed, Abidor has described May '68 itself as "the end of a revolutionary illusion." It's what NYU professor Kristin Ross, drawing on another '68-er, Jacques Rancière, calls "the police conception of history": Move along, folks, there's nothing to see here! As Ross argues in her book "May '68 and Its Afterlives," this episode actually constituted an "event" in history — meaning that it broke from the repetition of everyday routine and brought about new possibilities. It was an event, Ross writes, "in the sense that thousands — even millions — of people were led infinitely farther than their education, their social situation, their initial vocation would have allowed them to foresee; an event in the sense that real participation — much more than a vague, formal solidarity, much more even than shared ideas — altered the course of lives."

Today, the stakes are too high to abandon the greater vision aimed at by young radicals. The economic historian Adam Tooze recently wrote in the Guardian: "We have to face the possibility that we have been living in a charmed interval." In the aftermath of the 1918 flu pandemic, massive economic growth and technological development brought rapidly rising living standards and increased life expectancy. But now the costs of growth have revealed themselves: Climate crisis and zoonotic diseases, as Tooze puts it, "are not merely accidents of nature. They have anthropogenic drivers." While there is much we don't know about the current pandemic, we can be sure that without a thorough restructuring of our society, there are more like it to come.

But the terrifying problem is that we have also been living through another kind of interval, as Badiou has argued — the interval that came after 1968, after the gradual defeat of revolutionary movements around the world and the domination of the neoliberal principle that "there is no alternative" to global capitalism.

This kind of interval is the one that comes after a period of widespread revolutionary action, which has built up to the point where it can present an alternative to the existing world, the world of domination and inequality. In these revolutionary periods there is an emancipatory idea which develops real, organizational support on a mass scale.

In the interval, Badiou writes in "The Rebirth of History," the revolutionary idea is "dormant." Great rebellions, discontent and agitation still take place throughout the interval. But the revolutionary idea hasn't been developed into a sustained and concrete political sequence. The idea of emancipation hasn't taken a material form, and those of us who still retain some hazy notion of the validity of this idea — that is, those of us who have not totally capitulated to the existing reality and decided that domination and inequality are permanent aspects of human existence — are uncertain about how to proceed.

There are signs of hope and inspiration in our present moment: A new generation is mobilizing around an emancipatory idea and attempting to find a way out of the interval. They are uncertain, experimenting, still finding a new way in a forbidding world. But they have that spark, that intuition, that something more is possible, that we have a responsibility to push beyond the boundaries of the weak and stultifying politics of the status quo. This is what real politics is. As the Congolese philosopher Ernest Wamba-dia-Wamba has eloquently put it, "Politics is a creative invention."

"The political attitude is not accommodating; the state of affairs in the world does not have to remain so because it is so," he writes. "People may live differently than they live." The "political attitude" is summed up in the simple yet impatient statement: "Let us do something about the situation!"

The scale of social change required to manage the impending age of catastrophe lies beyond the myopia of those who, since the election of George W. Bush (if not before that, in historical terms), have endlessly repeated that we have no option but to reduce our politics to the embrace of the "lesser evil." To reprimand young people for failing to muster enthusiasm for voting for the lesser evil ultimately amounts to a refusal to recognize the necessity for a greater idea, for a mobilization for structural transformation. In our age of catastrophe, "lesser-evil-ism" is the most unethical position. The slogan of May '68, "Be realistic; demand the impossible!" remains a rational and ethical principle for the present. We should be inspired by the youth who are reviving it.

To commit yourself to struggling for a better world, even when the odds are against you and the defeated leadership of the left is telling you, in the words of a May '68 poster, to "be young and shut up" — that's real courage.