"It's capitalism over citizenship": Janelle Monae on our dystopia echoing Amazon's "Homecoming" 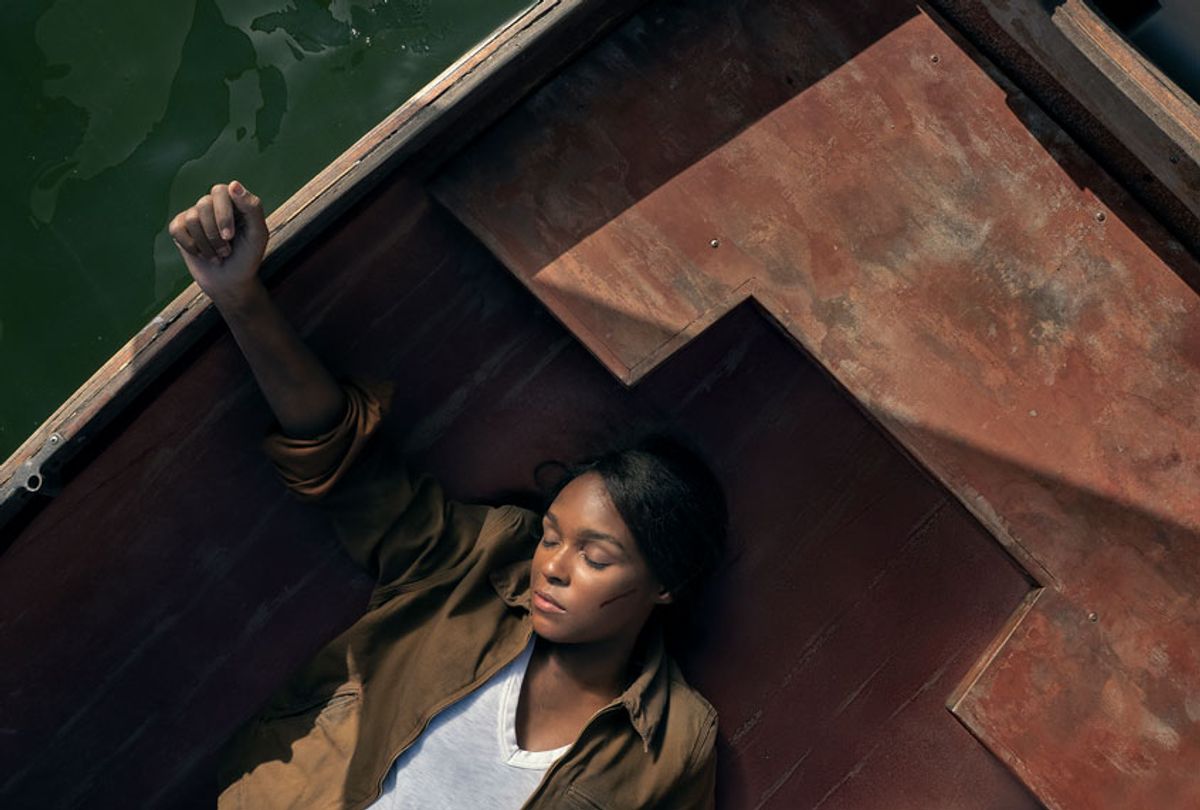 Janelle Monae grew up with an appreciation for science fiction, flying the flag of its creative influence in much of her music and visual art. Consider her 2010 album "The ArchAndroid," an auditory homage to Fritz Lang's 1927 film "Metropolis," a love affair first manifested in her 2007 EP "Metropolis: Suite I (The Chase)." This week marks the 10th anniversary of her groundbreaking debut's release, coinciding nearly to the day with her first turn as a TV series lead for Amazon's "Homecoming."

Any celebrations that may have been planned for the former have been canceled, though. As for her promotion of "Homecoming," when I connected with Monae on Zoom as part of a recent virtual media event, she greeted me from a reclined position that read as exhaustion.

Dystopia on film is fascinating. The reality of it takes its toll on the best of us, even a master's-level student of genre. "I'll wake up every morning and [think], what is going on? What kind of . . . bad science fiction film is this, where people walk around with masks right now?" she added later. "I can't even hold my niece, you know, who's less than a year old, and everyone's skeptical of each other."

"And then," she adds, "you have this misinformation, you have your administration firing the pandemic team and hiding information that is life or death for many of us."

Artists infuse meaning in the smallest details, and Monae does this via close examination of the medium in which she's working. In previous interviews she said the roles she takes on in her music and on film tell parts of her story and her part in the larger experience of being a queer black woman in America. This is as true of 2013's "Electric Lady" and 2018's "Dirty Computer," whose accompanying film is a celebration of pansexuality and the female form, as it is of her work in the 2016 Oscar nominated films "Hidden Figures" and eventual Best Picture winner "Moonlight."

Before signing on to star in "Homecoming," Monae listened to series creators Micah Bloomberg and Eli Horowitz's podcast and watched the first season, "which had this kind of Hitchcockian vibe to it," she said.

For a number of reasons, she was sold. "The suspense, what they had to say around veterans, the music, the short episodes, the credits rolling as you would still see some of the characters still acting . . . I just thought that they're innovating in this TV world."

The first season of "Homecoming" marked Julia Roberts' first appearance as a TV series' lead. This new season places Monae in the top billing position as Jackie, a veteran who wakes from a slumber to realize she's inside of a canoe floating in the middle of a lake. How she got there and who she is are the first two mysteries she has to solve, and her slow, aching journey to fill in the considerable blank spaces of her memory becomes this new season's backbone.

Season 2 adopts other changes, too. Sam Esmail, who directed the first season's episodes, handed the reins over to Kyle Patrick Alvarez (although Esmail remains an executive producer on the series). The signature vintage tracks from classic paranoid thrillers have been replaced by an original score composed by Emile Mosseri that's equally skilled in strumming the viewer's sense of foreboding and anxiety.

And while Roberts's character doesn't appear in these new episodes, she's also an executive producer who approved Monae's casting. "How the hell do you say no to Julia Roberts? I'm not stupid," Monae said.

"Homecoming" made its mark with a heavily atmospheric first season that backs up its aesthetic flourishes with a provocative, tautly realized story. It gently submerges us in the uneasy presentation of Homecoming Transitional Support Center, a Florida facility that purports to be devoted to re-assimilating combat veterans into civilian life.

Under the umbrella of a corporate entity known as the Geist Group, Homecoming offers the vets group and individual therapy sessions, and feeds them hearty meals that, unbeknownst to them, happen to be laced with a memory-altering drug.

Stephan James' Walter Cruz is one of the few returning cast from the previous season, along with Bobby Cannavale's Colin Belfast and Hong Chau as Audrey Temple. But one remarkable flip between the first and second seasons is that the reversal in the series' gender dynamics.

In the first season Chau and Roberts were surrounded by men, and underlings to Cannavale's abuse, power-drunk Geist executive. Now, for reasons revealed later in the season, Chau's Temple is atop the Geist corporate ladder, and welcomes a new force into its ecosystem by way of Joan Cusack's military officer Francine Bunda.

The fewer specifics you know about these new episodes of "Homecoming" the more satisfying its road trip may be. However, it doesn't spoil anything to share Monae's observation to my pointing out that these women, and her own character, come by their power by using methods traditionally employed by men – subterfuge, brazen fabrication of facts, and brute force.

Monae's work is steeped in a dedication to civil rights, queer identity, and feminism, all elements that "Homecoming" enables her to uplift and, with regard to patriarchal expectations placed on women struggling to succeed under a corporate structure, to critique.

"There are a lot of women that I talk to that are in the workplace . . . that feel like in order to be accepted or to be taken seriously, 'I have to assert myself like a man.' And I hate that. I hate that that's the case. What does that even mean? But some of the rules that have been created in this patriarchal society that we live in, unfortunately, we fall victim to. And they also poison us," she said.

She continued, "Is this just a part of the game for us? Or have we been tainted? You know, we didn't create this system. They did. And we're just like trying to win at their game. And I hate that. I really do. But it was great to explore it."

Monae also thrills to this season's expanded look at the Geist Group's uneasy (and some might say unholy) relationship with the military, especially in the context of how the current administration is prioritizing corporate will as this pandemic continues to take its toll.

The realization that Monae's "Homecoming" season debuts before a "captive" audience probably gives her less joy than others might feel. Fears of the novel coronavirus' spread and the shelter-in-place order currently grounding her and millions of others mean a delayed release date for her horror film "Antebellum," which has been pushed back to August, and the cancellation of scheduled performances at New York City's Pride Parade and Essence Festival.

She recently told Terry Gross on an episode of NPR's "Fresh Air" that she's not making any music right now, echoing thoughts she shared in our conversation. But at some point, even this stranger-than-fiction reality may inspire her.

"When I write music and short films, in general, all my stuff is slightly forward. So even my songs that I wrote over a decade ago still ring true to now," she said. "Even the concept of 'The ArchAndroid' and even 'Dirty Computer,' they feel so right on time and right here."

As for where her "Homecoming" heroine fits into the story of who she is, Monae thinks for a moment before answering, "Both of us are trying to figure out what is really going on in our world, you know? It's this discovery of, this unpacking the lies and trying to find out the truth. I think that's where we meet . . . She's being manipulated, and I feel like we're all getting manipulated every single day."