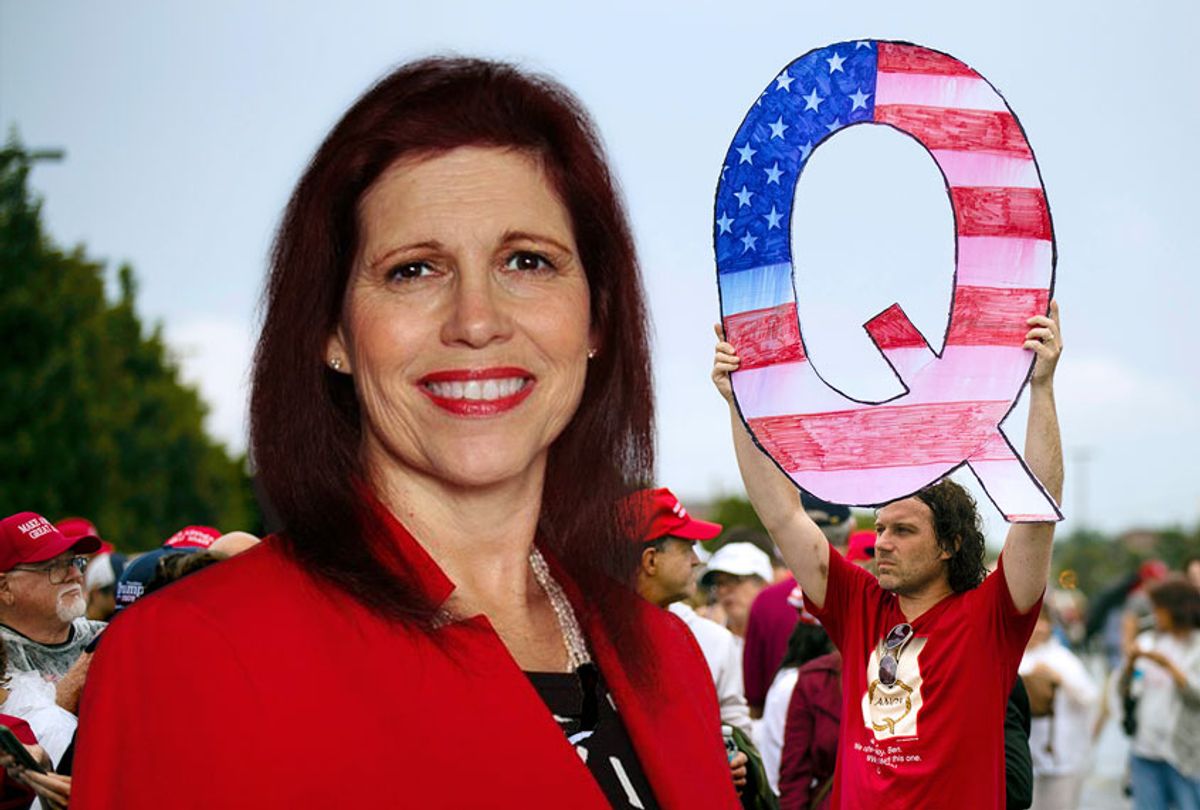 Jo Rae Perkins, the former chair of the Linn County Republican Party, defeated three other candidates in Tuesday's Republican primary with nearly 50% of the vote.

Perkins took to Twitter to celebrate her victory and pledge her allegiance to "Q."

"Where we go one, we go all," she said, reciting the QAnon slogan in a video that has since been deleted. "I stand with President Trump. I stand with Q and the team. Thank you Anons, and thank you patriots. And together, we can save our republic."

The QAnon conspiracy theory began on the far-right message board 4chan, where an anonymous poster who calls himself "Q" writes clues to followers. QAnon supporters believe that a secretive network of deep state officials and liberal elites are running a global child sex trafficking ring and trying to bring down President Trump because he is secretly working to stop them. Trump has never officially endorsed or directly mentioned this conspiracy theory but has frequently retweeted its supporters.

The Daily Beast's Will Sommer explained that QAnon supporters believe that "every president before Trump was a 'criminal president' in league with all the nefarious groups of conspiracy theories past: the global banking elite, death squads operating on orders from Hillary Clinton, deep-state intelligence operatives, and Pizzagate-style pedophile rings. In an effort to break this cabal's grip, according to Q, the military convinced Trump to run for president."

Perkins tried to walk back her embrace of the conspiracy theory on Wednesday.

"To be very clear, I do not believe everything from Q/Anon and would never describe myself as a follower, but I also do not believe in infringing upon any outlet's right to discuss news or topics," she said in a statement. "My slogan, For One Oregon, has nothing to do with conspiracy theories or media bias, but rather, has long been my commitment to being a civil servant for all of Oregon, not just some as has been the case under Jeff Merkley's tenure."

Perkins' support for the conspiracy theory, however, was not limited to her election night message.

"Very strong probability/possibility that Q is a real group of people, military intelligence, working with President Trump," she said in a January interview. "Q is most likely military intelligence ... and they've been out there watching what's been going on with our country for decades and they are partnered with President Trump to stop the corruption and to save our republic."

She has repeatedly tweeted in support of QAnon, Media Matters reported, and has posted the QAnon slogan to both her personal and campaign Facebook pages.

"For those who state Q is conspiracy, rhetorical question for you; what if you are wrong?" she tweeted in December. "If I am wrong, then the mathematical improbability of consequences failed! We've been fed many lies for years and YOU are too afraid to look behind the curtain. I'm not!"

Perkins, who has unsuccessfully run for Congress several times in the past, has also claimed that "there's a lot more people that are running for political office that follow Q than are admitting to it."

Media Matters identified numerous other Republican candidates that have openly endorsed QAnon. Mykel Barthelemy, a  Republican candidate in Georgia's 6th congressional district, has claimed that "everything that they said that was conspiracy has been proven to be true." Mike Cargile, running in California's 35th congressional district, has a QAnon slogan in his Twitter profile and has promoted the conspiracy theory online. Marjorie Taylor Greene, a candidate in Georgia's 14th congressional district, has repeatedly promoted the conspiracy theory on Twitter, The Atlanta Journal-Constitution reported, and has been "encouraging her followers to message her with questions [about Q] so she can 'walk you through the whole thing.'"

Most of these candidates are viewed as fringe figures with little chance of victory, including Perkins. Although Oregon was understood as a purple state until recent years, it is increasingly controlled by Democrats.

"It's a remarkable state of affairs given that as recently as 2018, Republicans ran a competitive candidate … who held incumbent Democratic Gov. Kate Brown to just 50% of the vote," wrote CNN's Chris Cillizza. "That the state party allowed someone like Perkins to win a US Senate nomination — or couldn't stop it from happening — speaks to a remarkable lack of foresight and/or power within the establishment. Perkins likely won't win — or come anywhere close. But she could well tarnish the Republican brand in the state for some time to come."